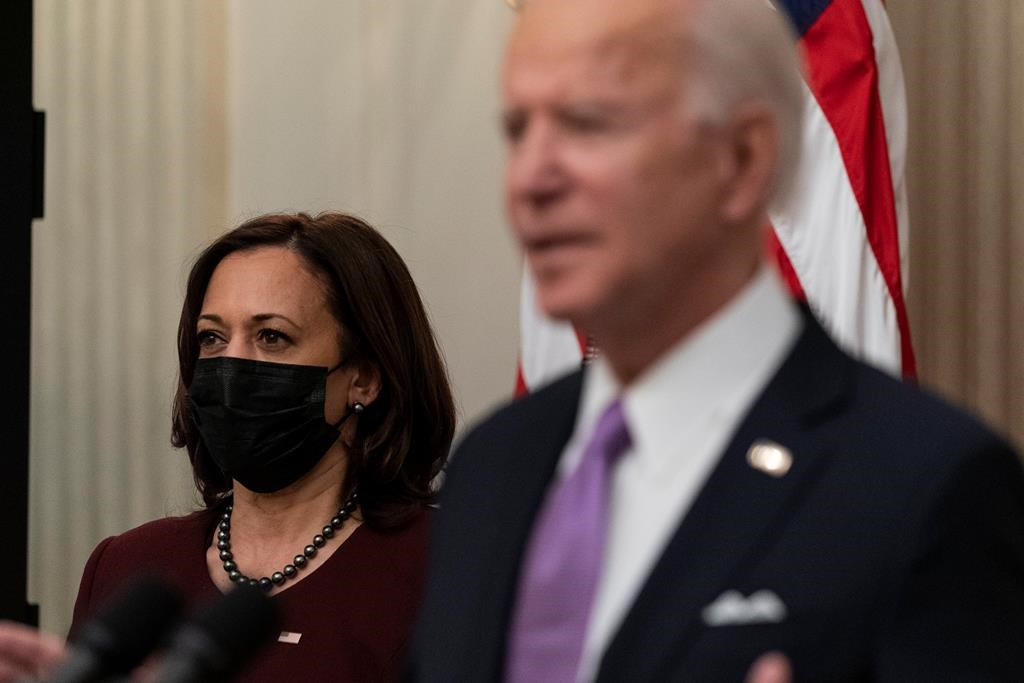 Vice President Kamala Harris, left, listens as President Joe Biden speaks about the coronavirus, in the State Dinning Room of the White House on January 21, 2021, in Washington. Photo by The Associated Press/Alex Brandon
Previous story
Next story

The Prime Minister's Office says the two discussed the COVID-19 pandemic, Canada-U. S. relations and Harris's time as a high schooler in Montreal.

They also discussed what a PMO readout of the call describes as "avoiding the unintended consequences" of President Joe Biden's protectionist Buy American policies.

Those policies have Canadian manufacturers and suppliers worried that they will be frozen out of bidding on U.S. procurement contracts.

A White House version of the call describes Canada's "deep importance to the U.S. as an economic and strategic partner."

The PMO language hints at what will be Ottawa's main argument for an exemption from the rules: that Canada is not the intended target of the measures.

Instead, it's all about shared priorities, "including fighting the COVID-19 pandemic through close collaboration on borders and access to vaccines, and to building back better," the statement said, borrowing a favourite Biden-Harris campaign slogan.

Trudeau "also looked forward to strengthening the bilateral trading relationship and Canada-U. S. supply chains, and avoiding the unintended consequences of Buy America policies, for the benefit of people in both countries."

The only reference to Keystone XL was an oblique reference to "strengthening North American energy security."

Other topics included a shared bilateral respect for democratic principles, the rule of law and justice, and a collective need to "increase trust in government."

Trudeau also thanked Harris for the U.S. supporting efforts to secure the release of Michael Spavor and Michael Kovrig, two Canadian citizens who have been languishing in custody in China for more than two years.

"The vice-president also expressed strong solidarity with Canada regarding the issue of two Canadian citizens unjustly detained by China, and she made clear that the United States would continue to do everything it can to secure their release," the White House said.

The Canadian statement also made reference to an upcoming "bilateral meeting" between Trudeau and Biden, which the two leaders agreed to last month. Details, including timing and whether the meeting might take place in person, have not been released.