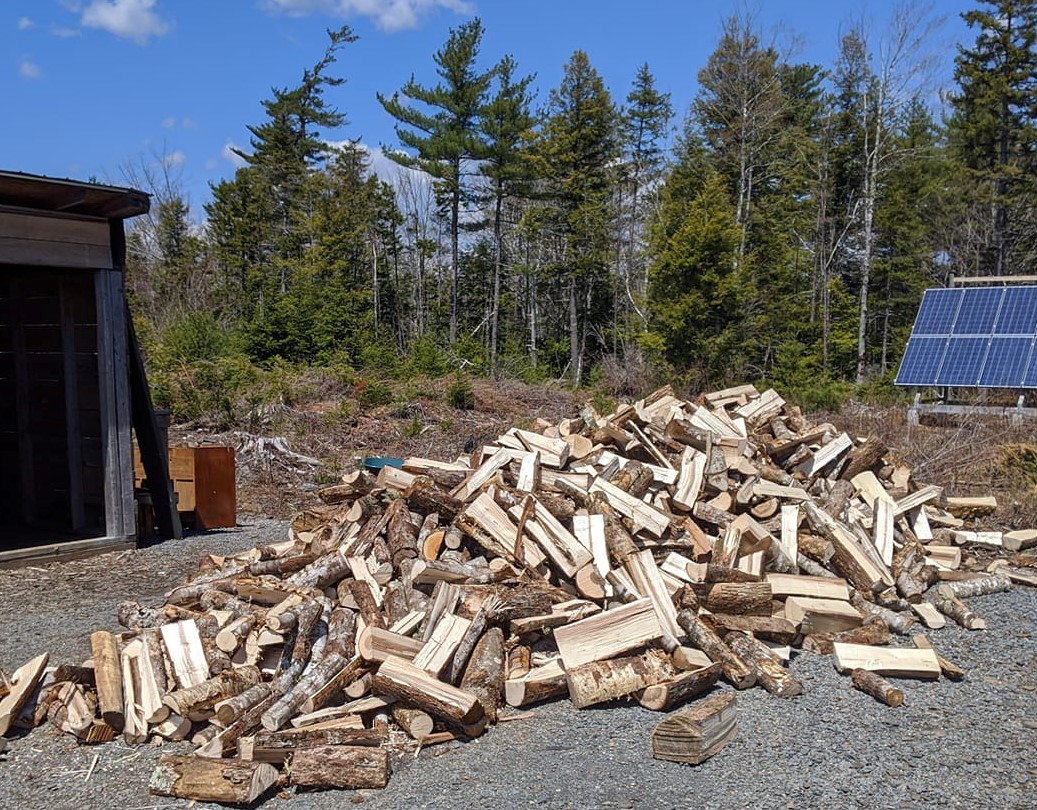 An impressive pile of wood sits waiting for Charles Mandel, who lives off grid in Nova Scotia. Photo by Charles Mandel
Previous story
Next story

We live off grid. We heat our house and cook with wood. That means at some point that wood must be gathered, split and stacked. Those were not things I'd done before. Now it’s something I firmly believe everyone should do. It’s good for the body, the mind, and the soul.

While I had bumbled about before with a handsaw and a few sticks of wood in order to have a supply for our backyard bonfires, this was something else entirely. Where we are, two kilometres back on an old logging road, we depend on a supply of wood, but when we moved in, we had none. Buddy, from whom we’d bought our house, had promised us the wood left over when he moved, but then reneged. When we arrived, the wood house sat empty. I found the name and number of a local fellow, who showed up a couple of weeks later with five cords of oak, birch and maple.

We untied ourselves from the electrical grid in May 2020, right during the height of the pandemic. We wanted distance from large power companies that no longer appeared capable of reliable transmission, and the urban grind, and people in general. We found it on 64 acres of formerly logged land containing a 1,600-square-foot house with solar and propane, and — yes — wood-powered. I was about to become really familiar with wood.

If you’ve never seen five cords of wood, let me tell you, it’s a lot. The pile took up the length of our parking spots in the drive and stood about four feet tall, all the split logs jumbled together. Stephen Mosher brought the wood over two trips in his pickup truck, hauling a hydraulic trailer that tipped the wood in a rattling confusion on the drive.

Mosher hails from Kingsburg, a village of million-plus-dollar homes in Nova Scotia commanding views of the ocean that are priceless. A stocky, soft-spoken man, Mosher runs his lumberyard right in the middle of the village, which consists largely of grey, wood-sided homes famed Canadian architect Brian MacKay-Lyons designed to look like vernacular sheds. To me, many of them brought to mind double-wide trailers. I doubt anyone has the temerity to complain to Mosher about the noise of the sawing, or the litter of logs scattered and stacked around his faded home; he is a descendent of Kingsburg’s original settlers dating back to 1753 or 1754.

In its history of Kingsburg on the Kingsburg Community Association website, much is said of the Mosher family, but little of lumber. A scant two sentences are devoted to timber: “Just before the cliffs, a stream flows into the ocean. This was once the site of a lumber mill constructed by my grandfather, Gus Mosher, but it seems the stream may not have been up to commercial use,” Denis Falvey wrote in July 2017. That’s it. Yet, on the way to Hirtle's Beach, it’s impossible to miss Mosher’s industrious lumberyard with its modest sign offering wood for sale.

Of course, all that wood in the drive needs stacking, which can be the source of much contention among wood purists. North Americans tend to stack the way my wife patiently demonstrated, which is to line up each piece evenly in the wood house, alternating each stick bark side up and then bark side down. They had to be wedged together relatively tightly, and if the pieces didn’t join perfectly, I either tried to find a different stick of wood that would, or jammed a slim piece like a shim in between to seal the gap. Norwegians, on the other hand, create domes. They argue these have several advantages, including drying the wood better than conventional stacks.

The process of working with firewood reminded me of the Zen koan: “Before enlightenment, chop wood, carry water. After enlightenment, chop wood, carry water.” To be sure, working with wood quiets the mind. Working in the sticky heat of the day, I feel the heft and roughness of each individual log as I pick it up, place it in the wood splitter, and activate the machine. It fires up, screaming, and the wedge drives into the log, ripping it apart.

Birch doesn’t cut particularly cleanly, and the long fibrous strands connecting the two split pieces often have to be hacked apart with a hatchet after. Oak splinters with a sharp crack, while maple comes apart in a clean cleave. I remove the logs from the splitter and toss them in the wheelbarrow. Once the wheelbarrow is full, I open the back door and release the dogs so they can loll about in the sunshine while the wood is stacked in the wood house. Repeat for the next three hours.

Every now and then, I’d pause and watch the butterflies — as Michael Chabon so beautifully phrased it in his novel Summerland — as they drunkenly fluttered about. One appeared to be a monarch. You don’t see many of them anymore. I looked at the line of brilliant green trees while heat blew up from the dirt drive and the blue tarp on the door of the wood house flapped and smacked against the building’s frame in the hot wind. It was both peaceful and lonely at once. But worries never crossed my mind and any anxiety I had was far, far away. In fact, I didn’t think at all. I worked contentedly.

Climate change reporter @charlesmandel2 opines on what it's like to live #offgrid in Nova Scotia.

Working with wood also brought to mind the deeply rooted Canadian identity as drawers of water and hewers of wood. In a 2016 speech in his capacity as the governor of the Bank of Canada, Stephen Poloz pointed out that the latter description originated in the Bible, but its application to Canada came from “Canadian economist Harold Innis, who used it in his 1930 book, The Fur Trade in Canada, to describe our traditional economic dependence on resource production.”

Yet wood-stacking has moved beyond resource production into the realm of art. Between Lunenburg and Mahone Bay, deep in the woods on the Bay to Bay rails to trails, Gillian Maradyn-Jowsey, a ceramic artist from Aylmer, Que., has created wood stacks of three different shapes and styles. She added bright red, blue and yellow paint to the ends of some of the cut wood, bringing a splash of colour to her art, which otherwise could easily be mistaken for the over-enthusiastic work of a wood-stacking zealot.

A plaque on a small wood bridge overlooking the wood piles informs “Riverbank Habitat” is a series of environmental sculptures made from locally sourced trees, and that over time, the installation will change, gradually break down and return to the earth. “The forms are inspired by the stacked firewood seen throughout Lunenburg County,” the text on the plaque notes.

Nor is wood-stacking as art just restricted to the confines of the esthetic formalists. Brian Golding of Pennfield, N.B., has turned the practice into folk art. For four years, Golding has created large sculptures out of his stacked wood, according to CBC News. In 2020, he turned self-referential, creating a piece he called Chain Reaction. To the delight of passersby, the 32-foot-long, nine-foot-high artwork is a chainsaw made completely out of cut, stacked wood.

Stacking wood is both elemental and deeply cultural. No one knows this better than the bestselling author and journalist Lars Mytting. He noted: “The way a person cuts and stacks wood can tell you a great deal about him, and the wood piles you see around the countryside are a reminder that wood is the connection between the forest and the home.” Mytting made this observation in his 2001 classic work titled Norwegian Wood: Chopping, Stacking and Drying Wood the Scandinavian Way.

While one might expect a volume-length treatise on wood-chopping to be … well, as dry as tinder, that’s not the case with Mytting’s indispensable exploration of the craft and culture of timber. Mytting wrote: “In my rear-wheel drive Volvo 240, my quest took me to some of the coldest places in Norway to visit the burners and choppers of wood. I have stopped at crossroads to listen for the buzz of a chainsaw or — best of all — the faint creaking sounds of an old man at work with a bow saw.” Sounds quaint, does it not?

In fact, Mytting’s rumination on firewood enflamed Norwegians’ imaginations. His book sold more than 200,000 copies and became the basis for a television show titled National Firewood Night on the state broadcast channel NRK, hosted by Rebecca Nedregotten Strand. In a story on the show in the New York Times in 2013, Nedregotten Strand told the American paper of record: “We’ll be sawing, we’ll be splitting, we’ll be stacking, and we’ll be burning.”

Wood-burning is carbon neutral, builds a healthy body, and invigorates the mind. So what are you waiting for? Chop, chop. Get yourself a wood stove and a wood stack, and help the environment even as you improve yourself.

Charles Mandel is a climate change reporter in Nova Scotia. He writes a free newsletter on off-grid living that you can find here.

The burning question: How green is your wood stove?

500+ scientists tell EU to end tree burning for energy
"Regrowth takes time the world does not have to solve climate change”, they write.
https://www.wwf.eu/?uNewsID=2128466