Reviewing a gem from the Victoria Film Festival, a couple’s loud, long night, and a screwy worldview 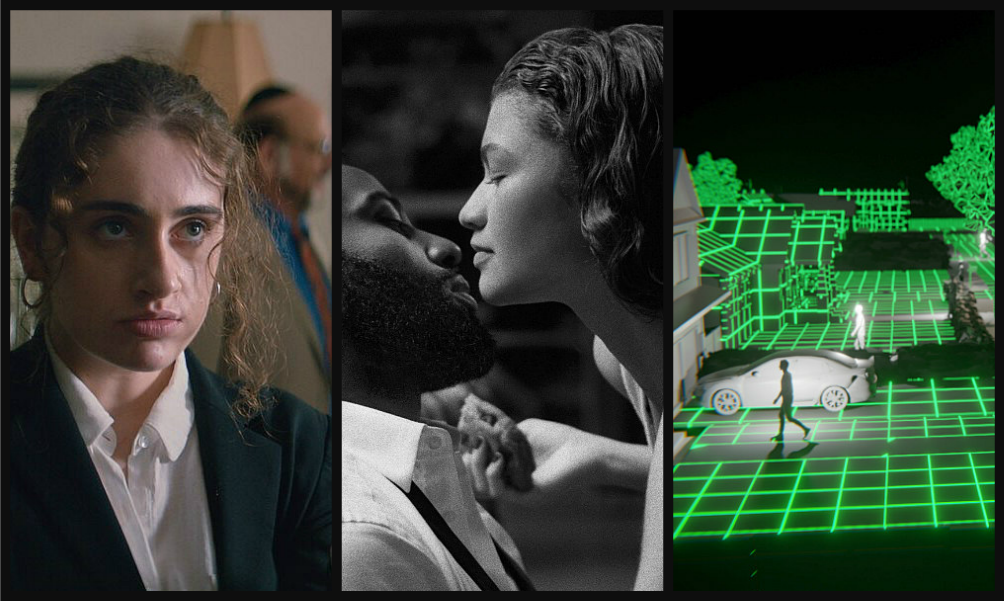 Also: An action blast from China, drama from France, low scenes from Tokyo, and a father’s other life.
Previous story
Next story

The Golden Globes? I’m OK with most of the nominations that came down this week, but can’t understand why Spike Lee was completely shut out. Da 5 Bloods is one of the best films of last year. Also, why Meryl Streep wasn’t nominated but James Corden was. And did Netflix really deserve 22 nods, and another 20 on the TV side?

Meanwhile, I notice two film festivals are now on and are available via streaming everywhere in B.C. At very good prices, too.

Both have a number of films that were at VIFF last fall, plus a few new to us.

Victoria’s has 50, including three Oscar hopefuls, a locally made highlight, All-in Madonna, and two films I review among others below.

A Glitch in the Matrix: 3

Film About a Father Who: 3½

SHIVA BABY: This is a very funny film about youth, secrets, awkward encounters and a slightly skewed view of the world. Don’t miss it. The director and writer, Emma Seligman, is from Toronto, though now living in the U.S., and you get the sense that there’s more than a bit of herself portrayed in it by Rachel Sennott. She plays Danielle, who’s obliged to go to a shiva (a Jewish wake), though she has to ask: Who is it who has died? While there, a room of familiar Jewish types talk to her, share gossip, ask if she has a boyfriend and tell her to eat. Seligman manages to show them as real people. Humorous, but not stereotypes.

Danielle is terrified that an old friend, Maya (played by Molly Gordon) will be there, and she is. They have a history together. Also, there is a man Danielle has had a secret relationship with. He has brought his wife and his ever-wailing baby. (“Who brings a baby to a shiva?” somebody asks). The wife runs three businesses, which creates a huge contrast for Danielle, who everyone calls “a babysitter” because that’s all she has done so far. Her academic career is also not stellar and the subject of many questions from the chatty mourners. The film is a hilarious pastiche of these encounters and embarrassments. You might also cringe just a bit at the recognition. (VFF streaming.) 4 out of 5

MALCOLM & MARIE: This one was predicted to get nominations from the Golden Globes this week. Didn’t happen, and I don’t know why. The acting is exceptional, so good that you don’t mind that the whole film has only two characters and all they do is talk. They converse like normal couples, some of the time, but also rise up into grinding arguments and occasionally yelling fits that remind you of other occasions like this (Who’s Afraid of Virginia Woolf, for instance).

John David Washington and Zendaya play a Hollywood couple that just returned home from a movie premiere. He’s the director; she’s not in it, but feels she’s the inspiration and grumbles that at the event, he thanked everybody but her. Their conversation goes in waves, starting with common movie industry talk. He has been compared to Spike Lee and Barry Jenkins. A white critic sees only race issues in his work, although his film is merely about a woman recovering from drug addiction. Zendaya’s character thinks it’s based on her life. She feels disregarded and calls him “mediocre” and “the neediest man I ever dated.” He dares to call her “genuinely unstable.” There’s much more, particularly a potent diatribe by him about movie critics and a parallel one by her about what makes a good movie. It’s not just industry stuff, though. Written and directed by Sam Levinson, it’ll resonate with couples who argue. (Netflix) 3 out of 5

TWO OF US: Here’s a highly emotional, at times ironic and even suspenseful, film about two old women who’ve been for years hiding the fact that they’re lovers. It’s France’s submission to the Academy awards and stars the renowned German actor Barbara Sukowa, and Martine Chevallier, whose work has been mostly in French theatre. They’re endearing here. In love for sure, but also bickering. They plan to leave Paris and their adjoining apartments and move to Rome, where they first met.

Martine’s character, nicknamed Mado, is stalling. Barbara as Nina gets pushy. Mado has a stroke and communicates without words for the rest of the film. Very poignantly, by the way. Nina blames herself for what’s happened. Problems mount because since they’ve never admitted they’re lovers, Nina has no claim to spend time with her. She’s not allowed to see her in hospital, and at home, a female caretaker keeps her away. The separation is painful for her. She does sneak in a few times, until the lock is changed, and she does sabotage the caretaker’s employment. But how will she finally reveal the truth? A couple of events bring a bittersweet and satisfying ending to this very likable and very well-acted film. (Available on Apple TV and other VOD platforms.) 4 out of 5

A GLITCH IN THE MATRIX: Yes, the movie (and sequels) about living in a simulated world. It seems to have shaped the thinking of a crowd of believers. Even followers of QAnon, although that is not referenced here. We do get several excerpts from a speech science fiction writer Philip K. Dick gave almost 50 years ago. They explain the concept, which happens to be prominent in his stories.

Our whole world is a computer simulation. Somebody has built it and controls it. Nutty? Serious articles have discussed it and some of those authors talk about it here. More weirdly, though, some of the believers talk about it on camera disguised as avatars. They look like space-movie characters, although their talk sounds sensible enough. Simulation theory is easier to understand than real life, says one. Another describes being in a sensory deprivation tank feeling “nothing on me was real,” just code. Some have been driven to violence, including one guy who is in jail until 2043. These people see life like a giant video game, highly realistic but definitely “counterfeit worlds.” The film by Rodney Ascher illustrates the idea with scenes from games and a lot of movies: Total Recall to The Wizard of Oz and, of course, The Matrix). Up to you what to make of it. (On demand.) 3 out of 5

SKYFIRE: Director Simon West knows how to get the adrenaline running. My favourite by him is Con Air, but that was long ago, and he’s been in a slump recently. He’s revved up again in this disaster epic for China’s biggest film company. It’s fun if you don’t think too much about plot and characters and go for the action. Simon did, and he delivers. Once it starts, it’s almost non-stop.

The story is Jurassic Park-like. An Australian developer (Jason Isaacs) builds a resort hotel near a volcano on an island in the South China Sea and enables tourists to get right inside via cable cars and a viewing dome. (The access to Niagara Falls is puny compared to this.) He doesn’t listen to his science adviser (Hannah Quinlivan), who warns there are rumblings. She lost her mother when the mountain erupted 20 years earlier. Her seismologist father (Wang Xueqi) fears it’s happening again, and within minutes, it does. We get 90 thrill-packed minutes of crowds running, fireballs flying, a Land Rover trying to outrun the lava streaming down, and (in a particularly tense sequence) people jumping in mid-air from one cable car to another because the cable just ahead has been burned through. A village is in danger because the lava is heading right for it. Familiar stuff, but exciting. (Victoria FF.) 2½ out of 5

FILM ABOUT A FATHER WHO: That’s not a typing error; it’s the full title of this film by Lynn Sachs about her wandering father. Ira Sachs is still alive, but much aged, the last I read. He was a rich hotel developer in Utah with a stable family and a secret life. He dated young women, got some pregnant and fathered nine children with them. Lynn says she didn’t even know about one sister for the first 20 years of her life. With the film, she tries to understand him. She doesn’t do as much of that as we’d like, but does bring him to us vividly.

Lynn filmed him for three decades in a variety of formats including, Super 8, VHS, Beta, and so we get to see him in all sorts of family situations. He was “the cool dad of Park City.” But he hid much of his life from them. He doesn’t lie, she says in the film. He just doesn’t tell you what’s going on. Lynn doesn’t judge, she loves him too much, but she does convey surprise at what she found out. One now-grown child talks about living poor and going to bed hungry. In another sequence, she tells of a trip to Bali and annoyance at his connecting with a young woman there. How much she knew, or should have known, is an open question. Yes, the film illustrates how hard it can be to know all within a family, but it’s also hard to believe a man’s other life like this (yes, they do happen), can be so well-hidden. Sad, but lots to think about here. Streaming for $12 per household here. 3½ out of 5

LOST GIRLS AND LOVE HOTELS: This is probably a fairly accurate depiction of a certain lifestyle taken on by visitors to Tokyo, but is neither lurid nor interesting enough for me. Canadian author Catherine Hanrahan lived it, she says, and wrote a novel and now this screenplay. Her character teaches young women who want to be flight attendants (not language training, she says, but pronunciation), and in the evenings, has hook-ups with men she meets in bars and beds in the city’s seedy hotels.

TV actor Alexandra Daddario is convincing as the unconnected woman. She’s badly dressed and often late for work after a hard night of drinking and sex. But we don’t find out why she’s like that. She just is. The story gets more interesting when she connects with a Japanese man (Takehiro Hira), who is clearly, judging by his elaborate tattoos, something in the gangster world of the Yakuzas. We don’t learn much about him either, except that he takes her on a train ride to a Buddhist shrine where she can be “reborn and let go of your past.” Since we don’t know what that was, the change is only mildly interesting. Something like the film. Lots of atmosphere wrangled by Swedish director William Olsson, but not much impact. (VOD, EST and DVD starting Feb. 9.) 2½ out of 5