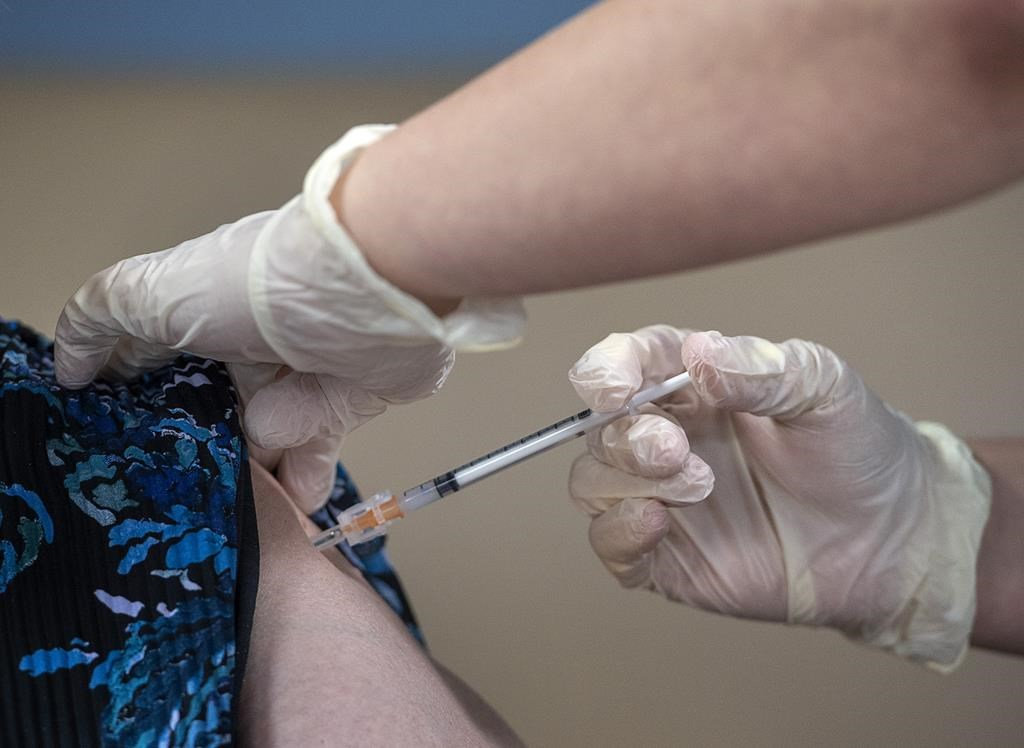 Amanda Parsons, a registered nurse on staff at the Northwood Care facility, administers a dose of the Moderna vaccine to Ann Hicks in Halifax on January 11, 2021. File photo by The Canadian Press/Andrew Vaughan
Previous story
Next story

The Public Health Agency of Canada says Ottawa plans to distribute more than 70,000 Pfizer-BiotNTech vaccine doses this week ahead of a major ramp-up, but no Moderna doses are on the schedule.

The agency says 70,200 Pfizer doses are forecasted for delivery to the provinces and territories for the week starting Feb. 8, followed by about 336,000 and 396,000 doses in the final two weeks of the month.

However, its distribution schedule lists no new Moderna shipments beyond Feb. 7, as confusion over deliveries deflates Canadians' confidence in the Liberal government's vaccine rollout.

Maj.-Gen. Dany Fortin, the military commander managing logistics of vaccine delivery for the agency, said Thursday that Canada does not know how many Moderna doses will arrive in the weeks ahead, and the company hasn't said why it has reduced shipments to Canada.

Pfizer and Moderna are the only two companies to have vaccines approved by Health Canada, though the department is reviewing vaccines from three others: AstraZeneca, Novavax, and Johnson and Johnson.

Weekly projections on vaccine distribution from the public health agency are fluid and subject to change.

Prime Minister Justin Trudeau has maintained that delivery delays are temporary, and that Pfizer and Moderna tell him Canada is still on track to receive six million doses by the end of March.

Moderna was initially slated to deliver almost 250,000 doses to Canada in the third week of February. The zero deliveries projected for the rest of the month — at least for now — come after a 20 per cent cut in last week's Moderna shipments.

The blank Moderna schedule also follows Pfizer-BioNTech's decision to slash deliveries by more than two-thirds over four weeks due to supply constraints.

This week's 70,200 Pfizer doses fall far short of the 366,000 doses per week originally planned for February, though the expected ramp-up later this month will make up for some of the shortfall.

The Public Health Agency of Canada says Ottawa plans to distribute more than 70,000 Pfizer-BiotNTech vaccine doses this week ahead of a major ramp-up, but no Moderna doses are on the schedule. #CDNPoli #COVID19 #Covid19vaccine

There were no new vaccines delivered to the provinces and territories on Sunday, leaving a total of 1.2 million doses delivered so far.

The provinces reported 11,885 new vaccinations administered for a total of about 1.07 million doses given as of Sunday night.