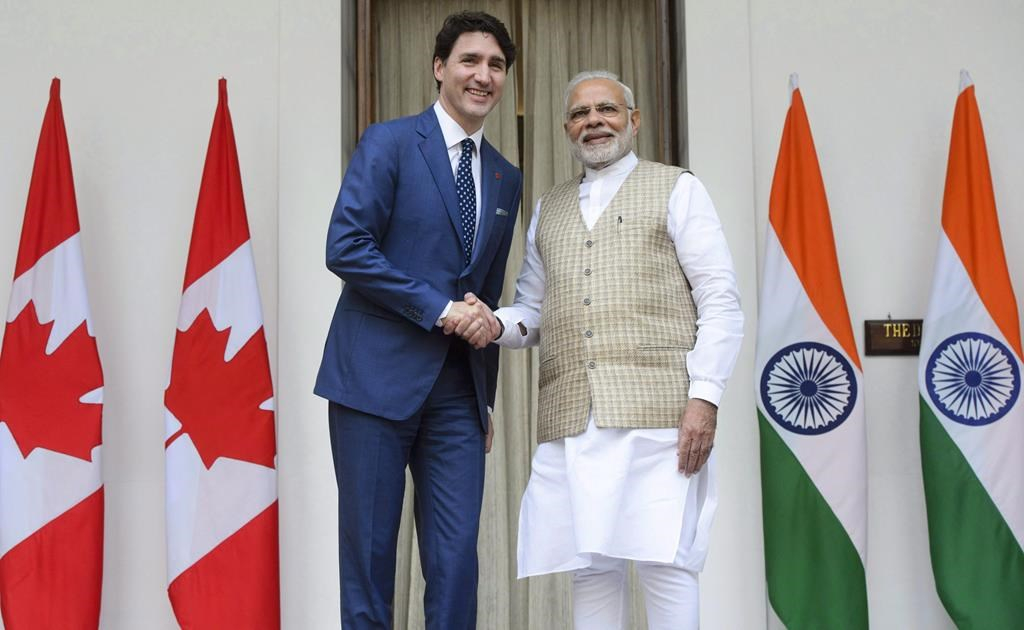 India will do what it can to get COVID-19 vaccines to Canada, Prime Minister Narendra Modi said after receiving a phone call from Prime Minister Justin Trudeau Wednesday.

But the pledge comes amid some renewed tensions between the two countries and with Canada wholly dependent on foreign help to get COVID-19 vaccines into Canada.

"Was happy to receive a call from my friend Justin Trudeau," Modi tweeted.

"(I) assured him that India would do its best to facilitate supplies of COVID vaccines sought by Canada."

Was happy to receive a call from my friend @JustinTrudeau. Assured him that India would do its best to facilitate supplies of COVID vaccines sought by Canada. We also agreed to continue collaborating on other important issues like Climate Change and the global economic recovery.

The Canadian summary of the phone call, provided by the Prime Minister's Office, describes it as a conversation "about India's significant efforts in promoting vaccine production and supply."

"(Modi) assured (Trudeau) that India would do its best to support Canada's vaccination efforts, just as it had done for many other countries already," said the statement.

India barred exports of the vaccine in January, but recently released a list of 25 countries where it has authorized exports to this month. Canada is not on that list, but Canada also was not scheduled to get any doses of AstraZeneca's vaccine until April. Health Canada has not yet approved that vaccine for use.

Anshuman Gaur, India's deputy high commissioner in Canada, said in an interview with The Canadian Press Wednesday that Modi "reacted positively" to Trudeau's request but did not go so far as to say it would be fulfilled.

#India will 'do its best' to get #COVID19 vaccines to #Canada, says PM Narendra Modi. #Covid19vaccine

“Our prime minister has assured that we will do our best to meet those requirements that Canada has," Gaur said. "This is a very positive development.”

That same day, Conservative health critic Michelle Rempel Garner asked Procurement Minister Anita Anand at a House of Commons committee hearing if she or Trudeau had called Modi about getting vaccines from there.

Anand said she had not but didn't know if Trudeau had.

"I was actually really surprised they hadn't done that yet," Rempel said in an interview Wednesday.

Rempel Garner said she was "encouraged to see the tweet" from Modi, but remains concerned about Canada's total reliance on foreign production to get COVID-19 vaccines.

Anand said last week she had approached all seven companies with which Canada signed a vaccine deal to see if they would be interested in making some doses in Canada. They all decided Canada didn't have the facilities needed to make it happen fast enough.

AstraZeneca signed an agreement with the Serum Institute of India last June to make up to one billion doses of its COVID-19 vaccine for low- and middle-income countries. More recently, the Serum Institute was approached by the company to help fill orders in other countries, such as Canada.

It is also one of the production sites for Novavax, another vaccine Canada has ordered.

Health Canada is in the final stages of reviewing the AstraZeneca vaccine. Dr. Supriya Sharma, the department's chief medical adviser, said this week the review has been complicated by a dosing mix-up during clinical trials, limited evidence of its effectiveness among people over 65 years old, and recent evidence it is not effective against a variant of the virus that first emerged in South Africa.

"All of that's taken into consideration as we do the review and we would only authorize the vaccine if we have sufficient information to show that it, the benefits outweigh the risks," said Sharma.

In addition to reviewing the vaccine in general, Health Canada received an application Jan. 23 to review the production process at the Serum Institute, ahead of the possibility Canada will get its doses from there.

Trudeau and Modi's relationship has often been tense, with Canada being accused of harbouring supporters of an independent Sikh state, called Khalistan, that would be carved out of Indian territory.

That dispute was what lay beneath much of Trudeau's troubled trip to India three years ago. Regional governments welcomed Trudeau warmly but Modi snubbed him for several days before the two had a productive and, by all appearances, cordial day of meetings.

More recently, India summoned Nadir Patel, Canada's high commissioner in New Delhi, for a dressing down after Trudeau publicly expressed concern about farmers clashing with police during what he deemed to be "peaceful protests" against new government laws on farming.

Before his call with Modi Wednesday, Trudeau didn't suggest there was any link between that situation and whether Canada could get vaccines from India.

"India has been a great partner in fighting COVID whether it's helping us with delivery of other pharmaceuticals or whether it's working together on potential vaccines," he said.

Canada is also taking steps to help protect Indian diplomats in Canada, after some threats against them and Modi were made in Canada. Gaur said India is "reassured by the Canadian authorities that they are taking appropriate action on all our concerns.”

RCMP spokeswoman Stéphanie Dumoulin said the agency takes "all threats seriously," but declined to comment on its response for security reasons.

Mounties are responsible for protecting embassies and high commissions in the capital, while local police protect consulates across Canada, she said.

—With files from Christopher Reynolds.