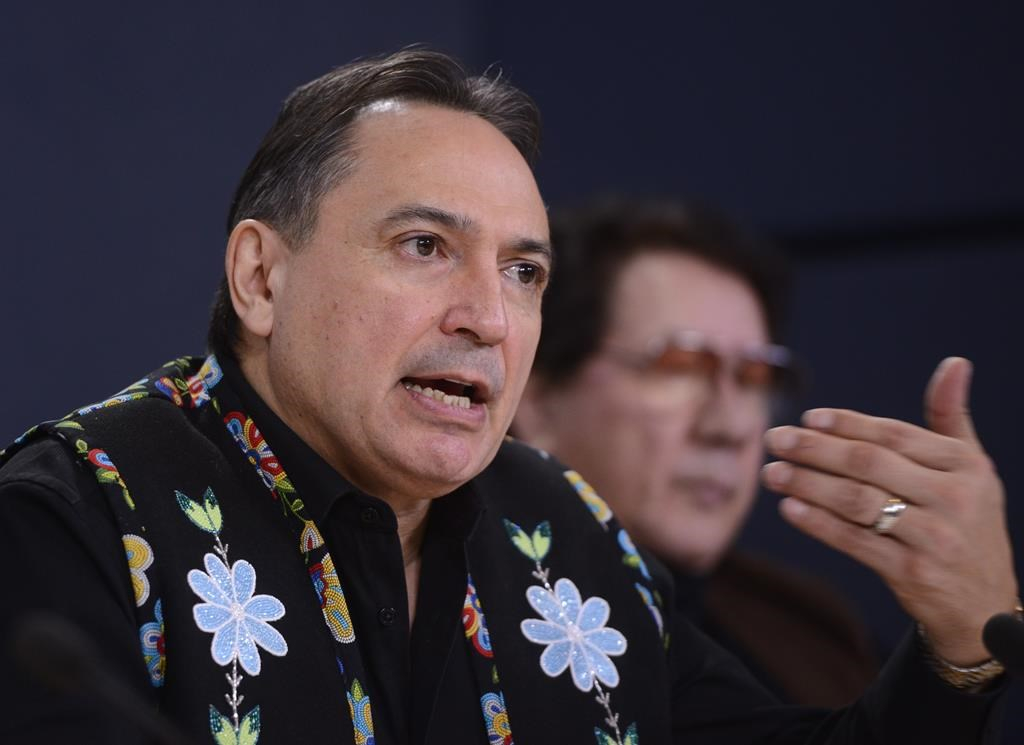 Assembly of First Nations (AFN) National Chief Perry Bellegarde at a press conference at the National Press Theatre in Ottawa on Tuesday, Feb. 18, 2020. File photo by The Canadian Press
Previous story
Next story

Passing a new law to implement the United Nations Declaration on the Rights of Indigenous Peoples will get First Nations closer to self-determination, National Chief Perry Bellegarde of the Assembly of First Nations said Wednesday.

"The declaration is a tool for building a better relationship with Canada, in which our inherent treaty rights will be affirmed, respected and upheld," Bellegarde said at a virtual forum organized by his advocacy organization to discuss the issue.

The Liberal government introduced the long-awaited legislation, Bill C-15, in December after a previous version of the bill died in the Senate ahead of the 2019 election.

Bellegarde said C-15 has real potential to change the way Ottawa treats Indigenous rights, noting that First Nations should determine how they want to engage with the work of implementing the declaration, or UNDRIP, into the Canadian legal system.

The proposed law would require the federal government to work with First Nations, Métis and Inuit to do everything needed to ensure Canadian law is in harmony with the rights and principles contained in the UN declaration.

Indigenous Services Minister Marc Miller said reforming Canadian laws to protect Indigenous Peoples' rights as stated in UNDRIP is the responsibility of both the federal government and the provinces.

He said although it's highly symbolic, the new law sets forth a set of principles as a guiding light to guide the government's interactions with Indigenous Peoples.

It also spells out the need for free, prior and informed consent from Indigenous Peoples on anything that infringes on their lands or rights, but C-15 does not include a definition of such consent.

Bellegarde said UNDRIP is a product of decades of hard work by Indigenous Peoples from around the world, and it now enjoys consensus as a global minimum standard.

Miller said the Canadian government in some circumstances has been complicit in destroying governance structures of Indigenous Peoples that have existed for hundreds of years and notes they were highly sophisticated ones.

"You have treaties that are sacred, that have not been respected," Miller said.

Canada then built a system that will take time to be reformed, Miller said.

"These are all very very complex conversations that most likely will not be public over the next few years," he said.

Bellegarde said he will advocate for amendments to improve the proposed law, noting that it now requires the federal government to create an action plan in three years. He said he wants a shorter deadline, or at least meaningful interim requirements.

Still, he said C-15 highlights the urgent need to respect and promote Indigenous Peoples' inherent rights, including their legal systems.

"Our sovereignty is explicitly acknowledged," he said.

He said the proposed law also has references to sustainable development and climate change, as well as ending systemic discrimination.

"This is language we can make good use of in our dealings with the Crown," he said.

"However, the bill would be stronger and more effective if it includes a specific explicit reference to racism."