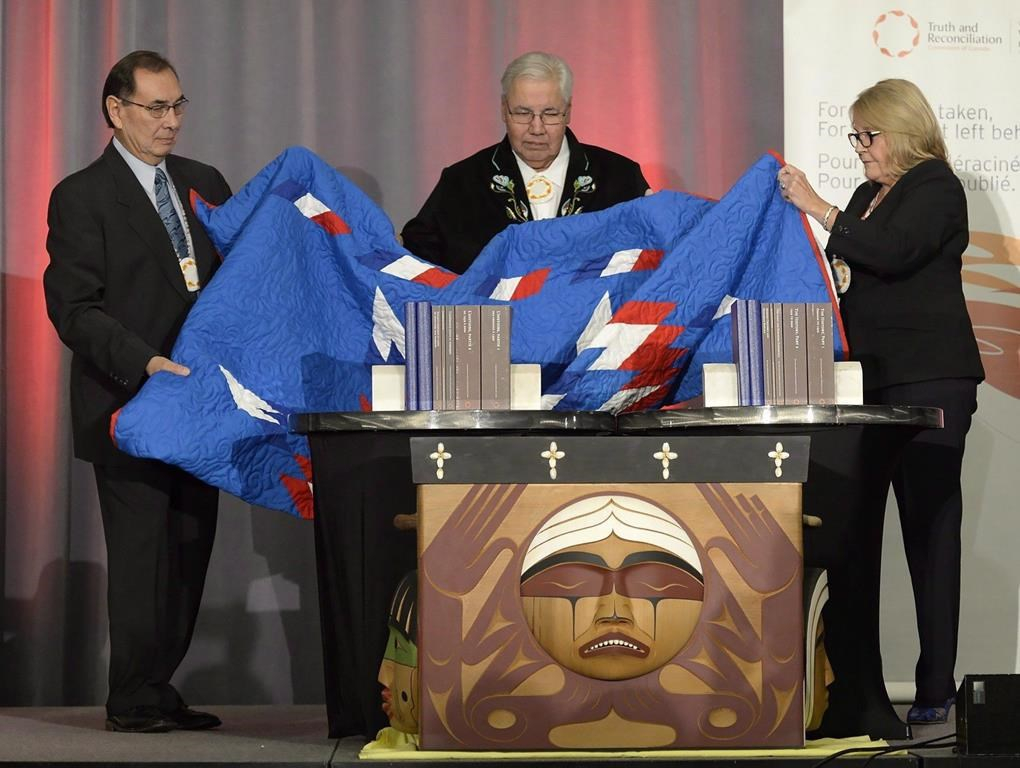 Murray Sinclair, Wilton Littlechild, and Marie Wilson pull back a blanket to unveil the Final Report of the Truth and Reconciliation Commission of Canada, in Ottawa on Dec. 15, 2015. File photo by The Canadian Press/Adrian Wyld
Previous story
Next story

Five years after the Truth and Reconciliation Commission issued its final report, commissioners Murray Sinclair, Wilton Littlechild and Marie Wilson are coming together to voice their concerns about the slow pace of reconciliation in Canada.

The commission's final report provided a detailed account of what happened to Indigenous children who were physically and sexually abused in government boarding schools, where at least 3,200 children died amid abuse and neglect.

The commission also published 94 calls to action urging all levels of government to change policies and programs to repair the harm caused by residential schools and move forward with reconciliation.

The three commissioners will be holding a press conference virtually on Tuesday morning to mark the fifth anniversary of the release of their final report.

Littlechild, a Cree chief and former MP who is a residential school survivor, said he's encouraged by progress on reconciliation but he is concerned about the pace.

"The pace is what consensus is. We thought, as the commissioners, we would be farther ahead by now after five years," he said in an interview with The Canadian Press Monday.

"It's kind of an urgent matter now to really refocus on the calls to action."

He said the three TRC commissioners haven't been together since the commission finished its work five years ago.

Littlechild said he is also worried about growing racism in Canada.

"One of the (areas) where it's going backwards, it's the very open systemic racism and discrimination that's not only continuing, but escalating."

Sen. Murray Sinclair, who chaired the Truth and Reconciliation Commission, said groups advocating for racism in the United States felt empowered in the last few years and that spilled over to Canada.

He says these groups are targeting specific issues that are important for reconciliation, including the implementation of the United Nations Declaration on the Rights of Indigenous Peoples (UNDRIP).

"We need to recognize that there is still some resistance on the part of some elements of Canadian society," Sinclair said in an interview.

He said racist and white-supremacist groups are attempting to deny the validity of the Indigenous story.

"They are feeling empowered and feeling that they have the right to voice their opinions," he said. "There is a very significant element of resistance that is trying to stir up fears and misunderstandings and misinformation."

Littlechild said he's troubled that six provinces oppose the implementation of the United Nations Declaration on the Rights of Indigenous Peoples.

Indigenous-relations ministers from Alberta, Manitoba, Saskatchewan, Quebec, Ontario and New Brunswick called for the delay of the UNDRIP bill in a letter obtained by The Globe and Mail earlier in December.

"It's not any more seeking consensus in terms of a non-partisan issue. It's no longer about the process. It's now politics," Littlechild said. "That's very, very sad and unfortunate."

"Indigenous survival, dignity and well-being should be a non-partisan issue," he says.

The commissioners are also concerned that a National Council for Reconciliation has not been established five years after they called for one.

Sinclair said the lack of this council is leaving the entire conversation about priorities in the hands of the government.

"The government, in some respects, is in a bit of a conflict of interest when it comes to the process of reconciliation and Indigenous rights," he said. "They control the legislative process that governs the lives of Indigenous people without attempting to give up that control or to acknowledge it. They should no longer be in charge."

Sinclair said the UN declaration calls upon colonizing states, including Canada, to recognize that they spent a lot of money to take land rights away from Indigenous people, so they have to be willing to spend a lot of money to undo that harm.

"They have to recognize that much of the income that governments have earned over the last number of generations, it's come from the resources that Indigenous people have a right to claim, still belong to them or still to be shared with them."

This report by The Canadian Press was first published Dec. 15, 2020