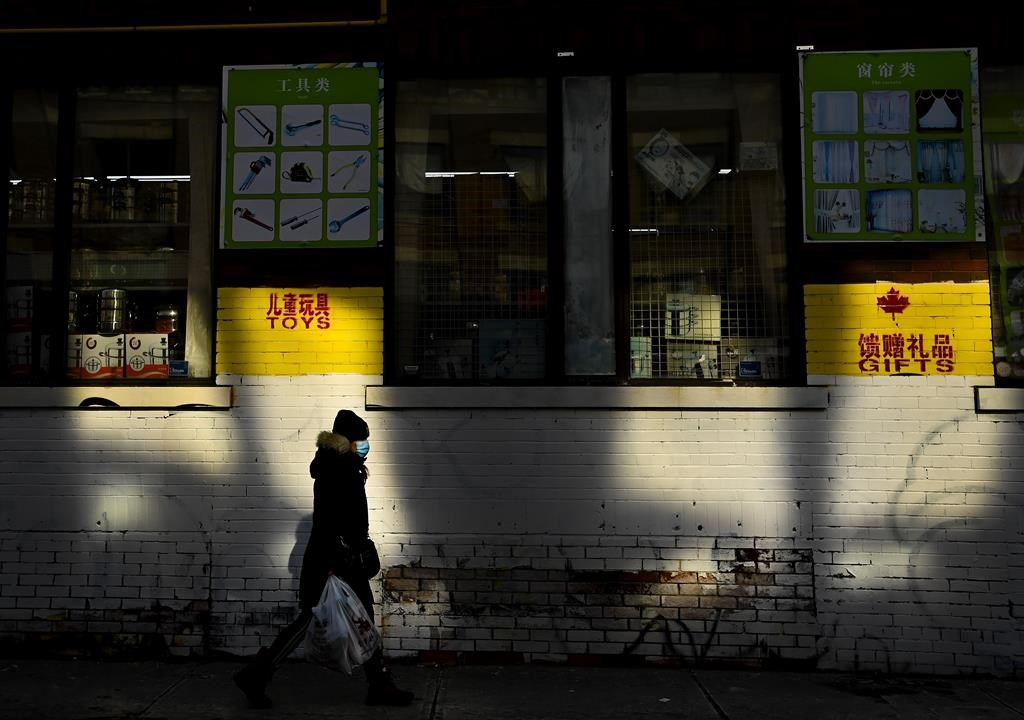 A person wears a protective mask after grocery shopping during the COVID-19 pandemic in Toronto on Wednesday, Feb. 10, 2021. File photo by The Canadian Press/Nathan Denette
Previous story
Next story

Concern over the spread of COVID-19 has delayed some voting in the Newfoundland and Labrador provincial election, postponed school holidays in Ontario and prompted Manitoba to seek vaccine from a Canadian supplier.

There won't be any polling stations Saturday on the Avalon Peninsula, which includes the capital of St. John's, but voting is to go ahead in other parts of the province. The results will not be released until all ballots have been cast.

"Many election workers have resigned out of fear of interacting with the public on election day," Elections NL said in a news release Thursday. "We cannot hold traditional polls without the support of these people."

Chief electoral officer Bruce Chaulk called for the move after provincial health authorities reported a record 53 new infections and 32 presumptive cases Wednesday. Polling station workers were backing out in droves over fears of contracting the virus.

Since a funeral-related outbreak in the spring, the province had not seen daily case numbers exceed 10 until this week. Another 100 infections were reported Thursday.

In Ontario, Education Minister Stephen Lecce also cited fear of the virus spreading when he announced that March break for students is being postponed until the week of April 12.

Lecce said the decision was made on the advice of public health officials after an increased number of infections following the December holiday break.

Ontario's largest teachers union had called on the provincial government not to postpone March break, saying students, families and teachers need the time off.

The pandemic science advisory group warned that the more contagious COVID-19 variants now account for five to 10 per cent of all infections. The group said strong public health measures and vaccinations will be vital to avoid a third wave of the pandemic.

Nationally, there has been a downward trend in daily case counts.

Concern over the spread of #COVID19 has delayed voting in Newfoundland and Labrador, postponed school break in #Ontario and prompted #Manitoba to seek vaccine from a Canadian supplier. #CDNPoli #NLpoli #Covid19vaccine

But Dr. Theresa Tam, Canada's chief public health officer, said in a statement that "the risk remains that trends could reverse quickly, particularly in areas of the country where new variants of concern have emerged."

Eight provinces have reported the variants.

On the vaccine front, after weeks of uncertainty in the supply chain, Maj.-Gen. Dany Fortin, head of Canada's distribution efforts, advised that manufacturers have said they will deliver the quantities promised for the end of the first quarter.

Fortin said the slowdown of Pfizer-BioNTech vaccine deliveries will end next week as the company has confirmed it will send almost 1.8 million doses over the next month.

Moderna's next shipment, however, will be two-thirds of what was previously expected for the week of Feb. 22. The remaining doses needed to reach two million in the quarter are expected in March.

In Manitoba, Premier Brian Pallister said his Progressive Conservative government has made a deal to buy a Canadian-made COVID-19 vaccine without going through Ottawa.

The deal would see Manitoba buy two million doses of vaccine from Providence Therapeutics. Providence, which operates in Toronto and Calgary, started clinical trials last month and hopes to receive federal approval in the fall.

"We have learned the hard way that we cannot rely on only one source of supply and that supply is somewhere outside of Canada," Pallister said.

He said he wrote to the prime minister and other premiers Thursday to invite them to join the initiative. He doesn't expect pushback from Ottawa.

Alberta Premier Jason Kenney said Thursday he had also spoken with the company and would like to see domestic vaccine production.

Kenney said Providence told him production in Canada would only be feasible with 50 million doses ordered.

"An order of that scale would obviously require co-operation across the country," Kenney said in Edmonton.

Anita Anand, federal minister for public services and procurement, said Ottawa has already secured vaccines for all Canadians to receive a dose by the end of September 2021.

There were 351 new cases of COVID-19 in Alberta Thursday.

Alberta has begun a four-part program to lift restrictions. Dine-in service at restaurants and one-on-one fitness training were among the health limitations eased this week.

Over the past seven days, there have been 24,331 new infections across the country. The seven-day rolling average of new cases is 3,476.

This report by The Canadian Press was first published Feb. 11, 2021

— With files from Steve Lambert in Winnipeg