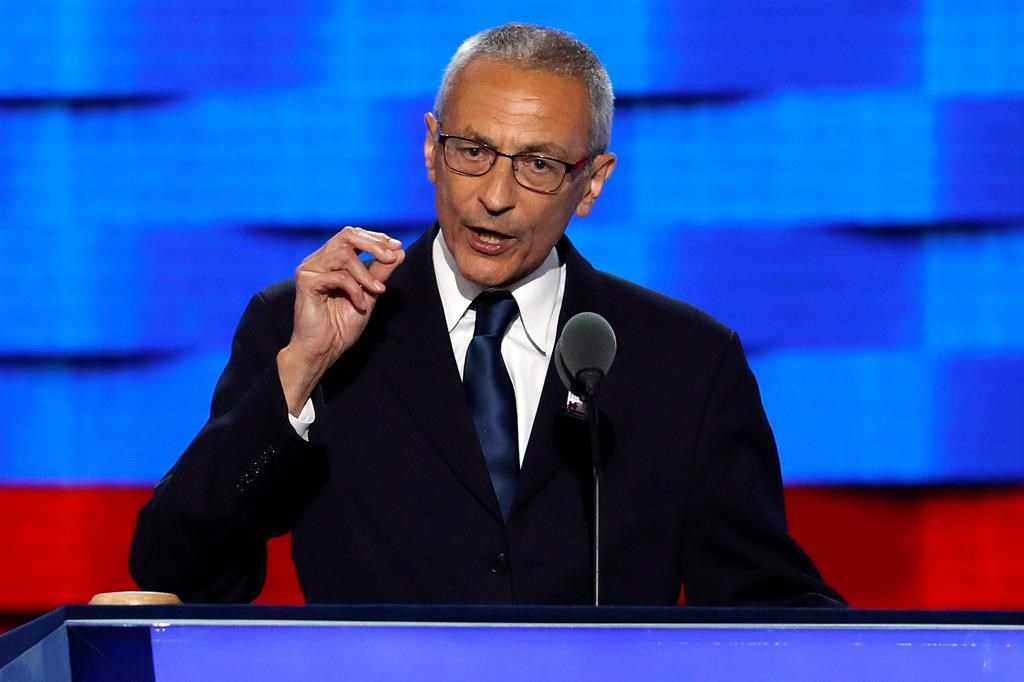 In this July 25, 2016, file photo, John Podesta speaks during the first day of the Democratic National Convention in Philadelphia. File photo by The Associated Press/J. Scott Applewhite
Previous story
Next story

A senior adviser to two former U.S. presidents delivered a stark message Friday to Canadians hoping for the resurrection of the Keystone XL pipeline: get over it.

The project is gone and not coming back, said John Podesta, who was White House chief of staff in the final years of Bill Clinton's second term and a senior counsellor to Barack Obama.

"He's withdrawn the permit, he's not going back. He made that commitment," Podesta said of the president.

"We've just got to get over it and move on and find these places on clean energy where we can co-operate... I think there's no turning back at this point."

Butts was less declarative about Keystone XL and acknowledged the impact the decision will have on a Canadian economy that's heavily dependent on the health of the Alberta oilpatch.

But he agreed the time has come to move on.

A senior adviser to two former U.S. presidents delivered a stark message on Friday, February 12, 2021, to Canadians hoping for the resurrection of the #KeystoneXL pipeline: get over it. #USPoli #KXL

"We should spend as much time as possible on the things where we agree and minimize our disagreements, as most productive relationships do."

The expansion, first proposed in 2008, would have ferried more than 800,000 additional barrels a day of diluted bitumen from Alberta to refineries and ports along the U.S. Gulf Coast.

Its demise, Butts said, has more to do with an "astronomical increase" in domestic oil and gas production in the U.S. in the intervening years than anything Canada could ever say or do.

"Presidents Trump, Obama and Biden had something that no president really since Eisenhower, maybe even Truman, has had at their disposal when it comes to oil and gas, and that is choices," he said.

"They've exercised those choices to the detriment of the Keystone pipeline and to the broader Canadian economy."

Biden's critics, meanwhile, show no signs of planning to give up the fight.

Alberta Premier Jason Kenney, whose provincial government is invested in Keystone XL to the tune of about $1 billion, has all but declared war, promising legal action and calling on the federal government to consider "proportionate economic consequences."

Republicans on Capitol Hill, particularly those representing Midwest states with thousands of jobs dependent on the project, have also continued to question the president's priorities.

The Keystone XL decision quickly focused attention on the potential fates of two other prominent cross-border pipelines, both owned by Calgary-based Enbridge Inc.

One is Line 3, which crosses the Canada-U.S. border in Minnesota and links the Alberta oilsands with the westernmost tip of Lake Superior. It's set for a $9.3-billion replacement.

The other, Line 5, picks up where Line 3 ends and runs through the Great Lakes to Sarnia, Ont. Michigan Gov. Gretchen Whitmer wants Line 5 shut down, an order Enbridge is fighting in court. It would rather replace a portion of the pipe.

The White House has not signalled a direction on those projects except to say they are "part of what our climate team is looking at and assessing," in the words of press secretary Jen Psaki.

That may reflect the competing interests that are likely at work within the Biden administration itself, said James Lindsay, senior vice-president at the Council on Foreign Relations.

"This is a case in which you have elements of the Biden coalition or constituency, in essence, at odds," Lindsay told a briefing last week with the Washington Foreign Press Center.

Proponents also argue that since both Enbridge projects involve replacing existing lines, the case for allowing them to proceed should be easier to make, he added.

"The challenge for a Biden administration is the reality that even when you want to work with close partners, there are going to be issues over which you disagree," Lindsay said.

"You want to work with others; that means to some extent you have to acknowledge their interests. But at times your own interests may take you in a different direction."