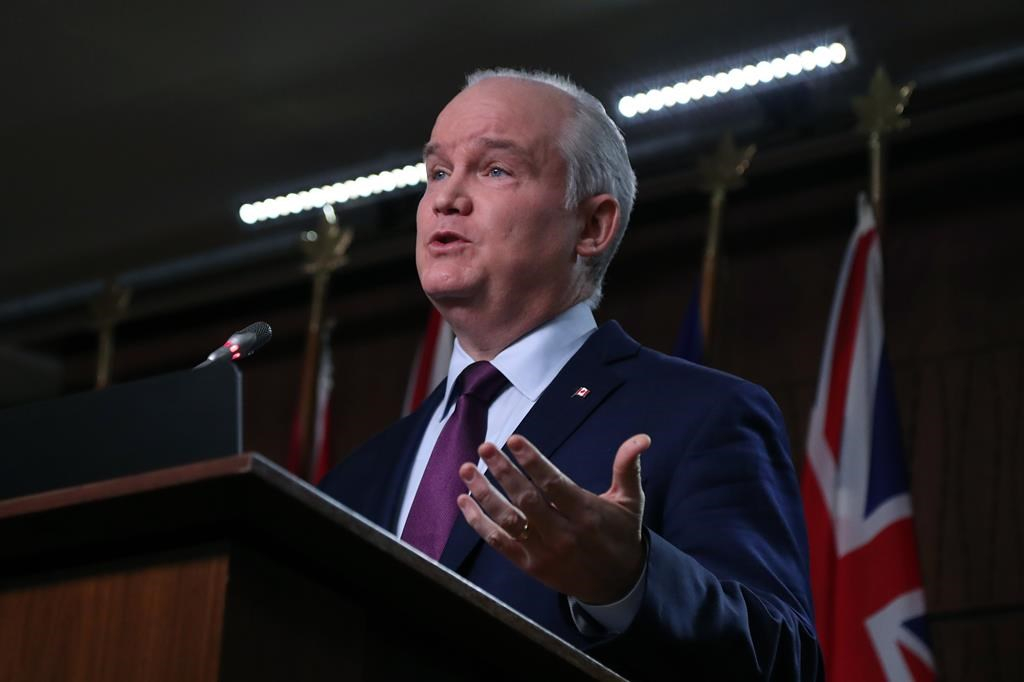 Conservative Leader Erin O'Toole is calling on the government to push for a new host for the Beijing Olympics next year amid China's "genocide" against minority Uighurs.

“I think Canadians would agree that it would violate fundamental ethical principles to participate in an Olympic Games hosted by a country that is committing a genocide against part of its population," he said Tuesday.

O'Toole said Prime Minister Justin Trudeau should reach out to the International Olympic Committee to move the 2022 Winter Games.

Canada "should not be sending athletes to China in the middle of a genocide," he said, but stopped short of stating Canada should boycott the Olympics — or step up to host them.

Beijing has denied any wrongdoing in Xinjiang province, saying it is running a voluntary employment and language-training program.

Trudeau said genocide is an "extremely loaded" term that should be applied cautiously and in strict accordance with internationally recognized criteria, and with a wariness of diluting its gravity.

"There is no question there have been tremendous human rights abuses coming out of Xinjiang," he said Tuesday.

Use of the word must be "properly justified and demonstrated so as not to weaken the application of ‘genocide’ in situations in the past."

Whether the term applies to China is "something we should be looking at in the case of the Uighurs," he said.

Conservative Leader #ErinOToole is calling for the relocation of the #Beijing Olympics next year amid #China's "genocide" against minority #Uighurs. #WinterOlympics2022 #CDNPoli #genocide

O'Toole's demand follows a letter from more than a dozen federal lawmakers from all parties earlier this month who called for relocation due to what they deemed a "genocidal campaign" against Uighurs and other Muslim minorities.

The letter, whose signatories include 13 MPs as well as gold medallist Jean-Luc Brassard, came after a call from some 180 human rights groups to boycott the Beijing games, slated to kick off Feb. 4, 2022.

Ottawa's delicate handling of the issue comes amid heightened tensions with the global superpower over the past two years following Beijing's demand that Canada release a top executive of communications giant Huawei who is wanted on fraud charges in the United States.

Meng Wanzhou, who is also the daughter of the company's founder, denies the charges, which China says are politically motivated as part of a U.S. effort to stifle the nation's economic expansion.

Former Canadian diplomat Michael Kovrig and Canadian entrepreneur Michael Spavor were rounded up by Chinese authorities nine days after the RCMP arrested the Chinese high-tech scion at the Vancouver airport in December 2018 on a U.S. extradition warrant.

NDP Leader Jagmeet Singh said he backs calls to find a new host for the 2022 Games.

"If Canada is an option, of course I'd be proud of Canada to be able to host an Olympics," he told reporters.

Bob Rae, Canada's ambassador to the United Nations, called on the UN in November to investigate whether China's persecution of ethnic Muslim Uighurs in Xinjiang constitutes genocide.

A Canadian parliamentary subcommittee concluded in an October report that China's treatment of Uighurs does amount to genocide, a characterization China rejected as baseless.