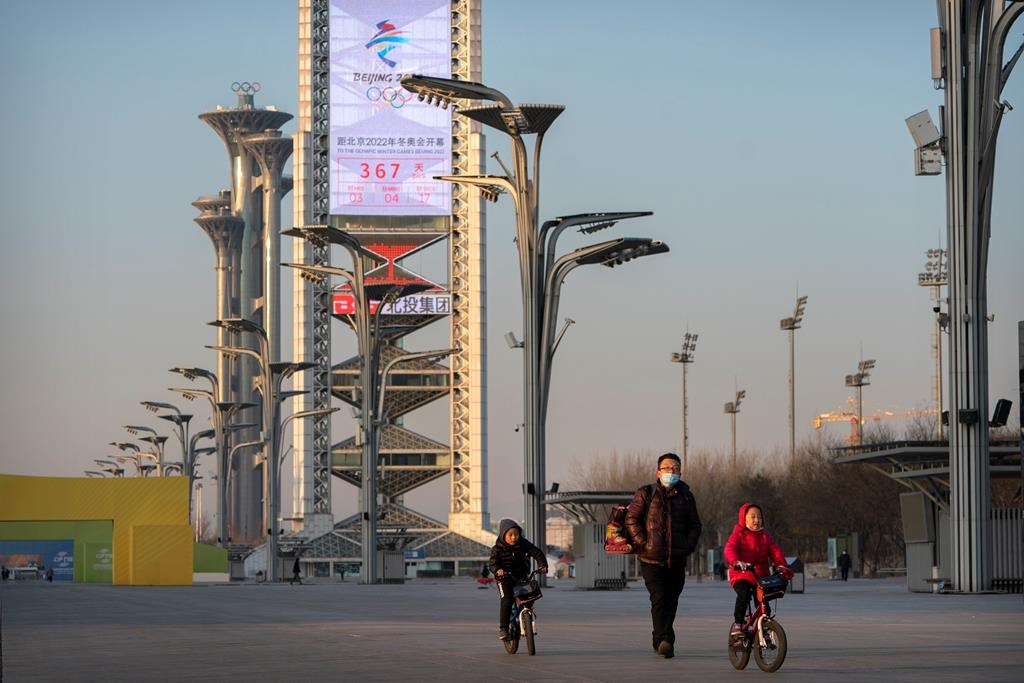 People walk on the Olympic Green near a countdown clock showing slightly more than 1 year to go for the 2022 Beijing Olympics in Beijing, on February 2, 2021. File photo by The Associated Press/Mark Schiefelbein
Previous story
Next story

More than a dozen federal lawmakers from all parties are calling for the 2022 Winter Olympics to be moved outside China, citing a "genocidal campaign" by the state against Uighurs and other Muslim minorities.

An open letter signed by 13 MPs, a half-dozen Quebec politicians and others warns that participating in the Beijing Olympics would "amount to taking part in a sinister, self-aggrandizing spectacle staged for the benefit of a regime that is perpetrating the worst possible crimes against humanity against its own people."

The letter demands that the International Olympic Committee relocate the global competition to avoid having athletes "tainted" by an event legislators say would be comparable to the 1936 Berlin games under the Nazi regime, rendering it "The Games of Shame."

A Canadian parliamentary subcommittee concluded in an October report that China's treatment of Uighurs does amount to genocide, a characterization the country rejected as baseless.

Beijing has denied any wrongdoing, saying it is running a voluntary employment and language-training program.

The letter, whose signatories include gold medalist Jean-Luc Brassard and former Liberal cabinet minister Irwin Cotler, follows a call from some 180 human rights groups to boycott the Beijing games, slated to kick off on Feb. 4, 2022.

The statement clarifies it is calling for relocation rather than a boycott.

More than a dozen federal lawmakers from all parties are calling for the 2022 Winter Olympics to be moved outside #China, citing a "genocidal campaign" by the state against #Uighurs and other #Muslim minorities. #WinterOlympics2022 #CDNPoli

"We are not asking our athletes to give up their Olympic dream, because we know full well how much effort will have gone into pursuing it," it says.

The letter also details the accusations that underpin its demand.

"Mass rapes and numerous acts of torture are being committed in these camps. Women are being forcibly sterilized, adults and children are being kidnapped, and surveillance camera systems are being combined with artificial intelligence software to track Uighurs around the globe," the statement reads.

"A full-fledged campaign of cultural erasure is also being waged, including the indoctrination of prisoners and the suppression of all Uyghur cultural expression.

"Some may argue that sports and politics should not mix. We would respond that when genocide is happening, it is no longer a matter of politics, but of human rights and crimes against humanity," the letter states.

It comes at a time of heightened diplomatic tensions between China and Canada over the past two years following Beijing's demand that Canada release a top executive of communications giant Huawei who is wanted on fraud charges in the United States.

Meng Wanzhou, who is also the daughter of the company's founder, denies the charges. China says her case is politically motivated as part of a U.S. effort to stifle the nation's global economic expansion. Her lawyers argue she has been subjected to abuse of process and should be freed.

Canada, while condemning China's treatment of Uighurs, has so far avoided labelling their persecution as genocide.

Former foreign affairs minister François-Philippe Champagne did not dispute Rae's assertion of genocide, but he did not repeat it either.

"We have expressed on many occasions that we are gravely concerned about the situation in Xinjiang,'' he told reporters in November.

Other signatories to the letter include Bloc Québécois MP Alexis Brunelle-Duceppe — who spearheaded the statement — Liberal MP Nathaniel Erskine-Smith, Conservative MP Kelly Block, NDP MP Jenny Kwan, Green MP Elizabeth May and groups such as the Centre for Israel and Jewish Affairs and the Assembly of First Nations Quebec-Labrador.

This report by The Canadian Press was first published Feb. 7, 2021.