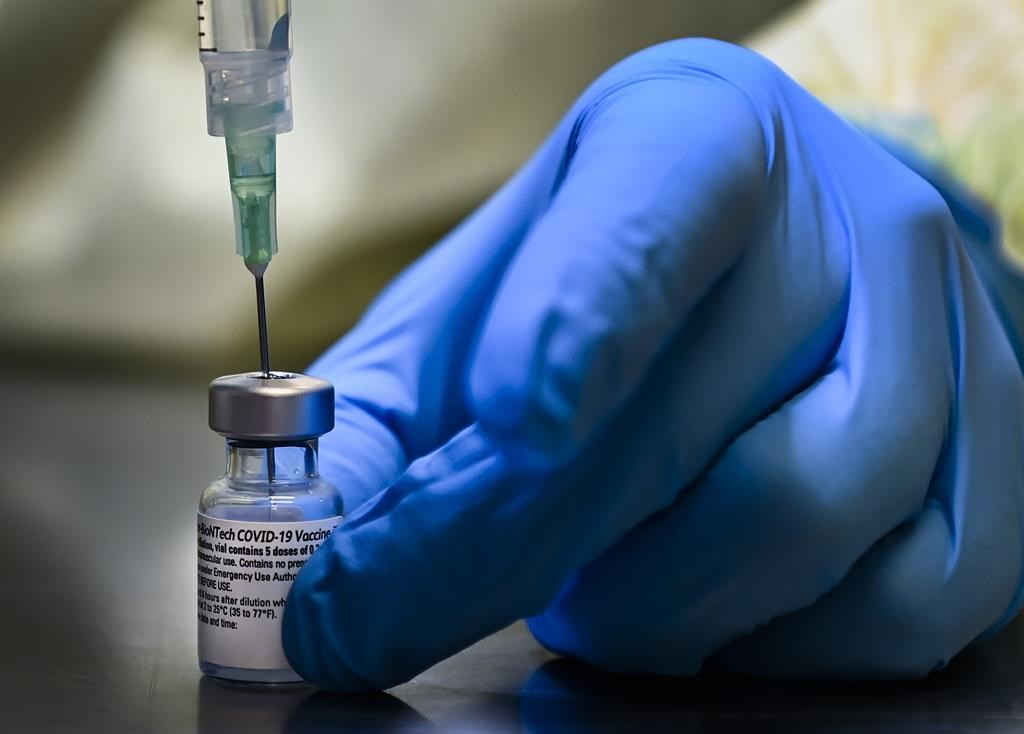 A health-care worker prepares a dose of the Pfizer-BioNTech COVID-19 vaccine at a COVID-19 vaccine clinic in Toronto on Thursday, Jan. 7, 2021. File photo by The Canadian Press/Nathan Denette
Previous story
Next story

Canada is home to significant scientific expertise and research tackling COVID-19, though one expert says long-standing hurdles make it difficult for the country to punch above its weight in the global fight against the virus.

Among the standout contributions is a Vancouver biotech company that's producing a key component of several vaccines, but a University of British Columbia professor says Canada could do more to support its experts.

He said clinicians in the United States are better equipped to conduct "good quality research at the bed side," while in Canada, separate budgets, personnel and infrastructure make it difficult to get clinical research up and running quickly, especially in response to a crisis like the pandemic.

"When the rubber hits the road, it's patients and providers and hospitals that are doing the work," and that's where Canada lacks on-the-ground operational resources for research in clinical settings, he said.

"If you look at clinical trials or vaccines or diagnostics (and) the testing of each of those things, if we start something and build something and then get swept away by (research) that's gone faster in another part of the world," he said, it becomes harder to implement those home-grown ideas.

Murthy would like to see research centres established at local hospitals across Canada, an approach he said constitutes a "culture shift" that hasn't happened yet and requires money and research staff at each hospital.

While he said there's yet to be a defining contribution of COVID-19 global research that Canada may call only its own, Murthy acknowledges the contributions of experts across the country.

"We shouldn't look down on the fact that we are good at this," he said.

In Vancouver, for example, biotech company Acuitas Therapeutics is contributing a key component to several COVID-19 vaccines: lipid nanoparticles that help deliver the drug in the form of messenger ribonucleic acid or mRNA.

Acuitas CEO Thomas Madden said in recent years they've developed carrier systems that are uniquely effective at protecting fragile mRNA when it enters the body and delivering it inside cells, where it provides instructions.

In the case of COVID-19 vaccines, the mRNA is "delivering a message to our cells that allows them to express the spike protein that's on the outside of the virus," he explained. "When our cells make this protein, it's recognized by our immune system as being foreign, and so we develop a protective immune response against that protein."

Acuitas' lipid nanoparticles help deliver a larger portion inside the cells than other carrier systems, said Madden. That means vaccine developers can administer a lower dose of mRNA while reaching effective protection.

When Acuitas began working with Pfizer and BioNTech, CureVac and Imperial College London on mRNA vaccines to fight COVID-19, the company realized their contribution was an important Canadian story, said Madden.

"Canadians should be aware that a Canadian company and Canadian technology (are) playing a critical role" in vaccine development, he said.

Meanwhile, a team led by researchers at the University of Alberta in Edmonton caught Pfizer's attention as they develop an algorithm to predict COVID-19 cases and deaths up to 10 weeks into the future by using massive amounts of public data from Canada and the United States.

The pharmaceutical company has a partnership with the provincial Crown corporation Alberta Innovates and Pfizer signalled its interest in supporting work on the algorithm, said Mark Lewis, Canada research chair in mathematical biology and co-applicant for the $220,000 grant.

The company is "not dictating any of the research," he noted.

A key feature of the algorithm is it learns from the data, said Lewis, in contrast to mathematical modelling that relies on certain hypotheses about how the illness spreads and other factors, such as the impact of vaccines.

"We're not really hypothesizing how things are working," he said. "We're just saying, here's all the data we can find, learn from it and make a prediction. So, it's philosophically quite different."

Their results so far have been submitted to a peer-reviewed journal, said Lewis, who hesitated to share too much until that evaluation is complete.

But he said the algorithm appears to do a "good job" predicting cases and deaths up to 10 weeks in advance, offering insight for policymakers.

"It's a way to help reduce uncertainty."

Making predictions about the pandemic is a tough job, said Lewis, because factors affecting the pandemic are always in flux, from public health rules to the availability of vaccine to everyday human behaviour.

Pouria Ramazi, an assistant professor at Brock University in St. Catharines, Ont., said their algorithm uses data from at least 25 variables from several thousand counties across the U.S., such as ICU capacity, the ratio of smokers to non-smokers, age and income levels, the temperature outside and the public health policies in place at the time data was collected.

Data is "less transparent" in Canada, he said, but they've still gathered a range of information from across the country to feed into the algorithm, which they hope to make publicly accessible.