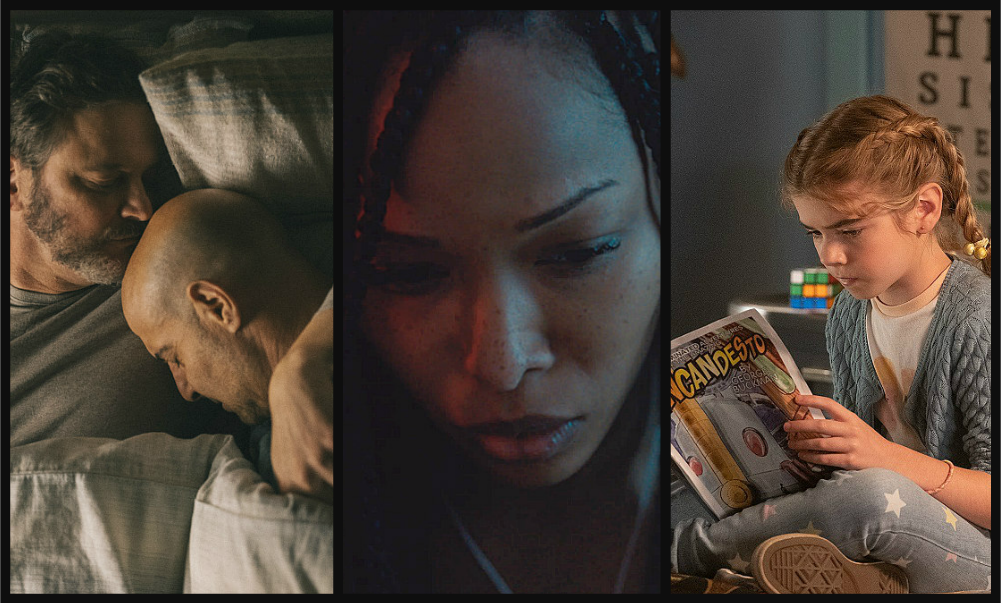 I had expected Nomadland to be available today. It is in the U.S., but on a service we don’t have here. So, our dates just announced are in a month (in Toronto) and early April elsewhere. Similarly, with The Mauritanian. You’ll have to wait a week or two for it.

Today’s new ones are lesser-known, but worthy, and start with a very fine gem. Read on.

Some Kind of Heaven: 3

SUPERNOVA: Two top-notch performances and a spare but highly emotional script meld beautifully in this movie. There are tears to come, but even more so a feeling of satisfaction because, as you’ll realize along the way, you’re watching a special film. It’s witty, mature, moving and all about friendship. Colin Firth and Stanley Tucci play long-time lovers who go on a road trip to the Lakes District in the north of England to relive some old times. They’re both artistic. Firth is a pianist. Tucci is a novelist, but terrified of the early onset dementia developing in him. “I want to be remembered for who I was, not for who I’m about to become,” he says in one of the stronger pieces of dialogue.

That heartfelt tone carries throughout this film. They’re visiting the home where Firth’s character grew up, and they’re welcomed warmly by his sister (Pippa Haywood) and others. But the film expands on issues the movies don’t often get to: inevitable decline, leaving your partner, being alone. The script and direction by Harry Macqueen bring them out sensitively and at the same time show that they’re universal. We all do, or will, face the same feelings. Even then, don’t imagine this is a dirge. It’s witty, warm, funny at times and absolutely human. (Now available on demand. Also streaming from VIFF Connect — B.C. only — and Inside Out and Bell Lightbox, nationally.) 4 out of 5

SOME KIND OF HEAVEN: The inevitable end is also on the mind in this film, but not nearly as much. Staying active and living full is the theme of this documentary created by Lance Oppenheim, with Darren Aronofsky as producer. He may be the source of the tinge of irony evident here. It’s at The Villages, the world’s largest retirement community in the middle of Florida. Some 130,000 people live there. We see golf carts in formation, synchronized swimming, bowling and rowing, cheerleaders practising (very briefly) and dancing (lots of it, often to the oldies). The architecture simulates small-town tradition and residents claim it’s like a “fountain of youth.” One, though, says it’s not like the real world. “We live in a bubble.”

The film spends time with four people: a married couple (the husband drifts out of “reality” now and then), a widow looking for a man, and a man looking for a woman. He lives in a van and has a drunk-driving incident in California in his bio. How he can hang around as he does isn’t well explained. Nor are other details. Do people buy the houses they live in? We see a realtor at one point, but don’t get more information. Nor that the town is for adults only and under-19s need a special exemption to live there. There are multiple golf courses, supermarkets and church services and death-planning talks for those who want them. And the question: Do people “accept” or “resign” to live in this “dream world.” (Streaming from VIFF Connect.) 3 out of 5

TEST PATTERN: Also, if only partially, for Black History Month. More directly relevant to the #MeToo movement, this film is about sexual assault and what happens afterwards. The victim (Brittany S. Hall) is moved on by a guy in a bar, drugged and surprised to wake up in a strange place and pretty sure what had happened to her. The film is restrained, but realistic. Her white boyfriend (Will Brill) is supportive and takes her to find what’s called a rape kit. At that point, their quest turns into an epic frustration.

They suffer long wait times, unhelpful and bureaucratic clerks, rules and dismissals. One place sends them to another that can’t help and then to another. There are more problems and the police don’t manage to help. There's a long intro so that we get to know the couple. She’s successful at some kind of job; he’s not much of a catch, a slovenly tattoo artist but friendly. He makes breakfast most mornings. They have chemistry, the better for us to grasp the annoyance they encounter, the way they’re dismissed, how the system blithely avoids helping them. The premise is well-articulated by first-time filmmaker Shatara Michelle Ford (director, writer and producer), who is from Arkansas and Missouri. It’s a strong debut. (Now streaming from The Cinematheque Virtual Cinema.) 4 out of 5

MISS JUNETEENTH: Don’t be put off by what sounds like a trite plot. This film is right on for Black History Month and even without it, has been winning accolades. Many are for the star, Nicole Beharie, who was named best actress by one group and given the “game-changer award” by another. She could get an Oscar nomination, too, next month. Also, Channing Godfrey Peoples has won a couple of best director awards for her work here. Pretty impressive for a simple film about a single mother trying to get her daughter into a beauty pageant.

It’s a real contest held in Fort Worth, Texas, to commemorate the time, two years after Lincoln freed the slaves, that the state accepted emancipation. The director knew about it because she’s from there and wrote the script about a single mother trying to spark her rebellious daughter into doing something with her life. The contest offers a university scholarship as a prize. “I wanna make sure she’s somebody we ain’t,” mom says. She works two jobs, in a bar and a funeral parlour, and the film’s ambience is carefully created to show everyday life today, including lively scenes in a Black church. There are a few political statements, like a burly guy’s words, “Ain’t no American dream for Black people,” but mostly the film stays with a story about ordinary people trying to make the best of it. (It’s on Crave.) 3½ out of 5

FLORA & ULYSSES: Here’s another film that’s great fun for your younger kids. Adults might enjoy it too for its wacky sense of humour, which is strong and entertaining early on, but fades into slapstick in the later scenes. Flora is a 10-year-old “cynic” (self-described) who ponders the role of superheroes. She reveres her dad who draws one, but can’t get him published and has moved out. Flora takes a squirrel as a pet and watches it display superhero powers like flying. Imaginary maybe, but nicely visualized here. It’s from a prize-winning book by Kate DiCamillo, directed by Lena Khan and, incidentally, filmed here in Vancouver, hence the classic Craftsman style houses.

The squirrel types cryptic poetry on Flora’s mother’s old Remington. On a visit to a diner, he causes havoc and the collapse of a giant rooftop doughnut. At home, he crashes through a window and collapses a chandelier and dining room table. A nasty animal control officer comes after him and gets his comeuppance. It’s that kind of movie. Kids will laugh. Flora is played with wide-eyed charm by Matilda Lawler (currently in a Broadway show). Alyson Hannigan and Ben Schwartz (both TV regulars) play mom and dad, and you’ll spot several B.C. performers. Nancy Robertson, familiar from Corner Gas, is prominent. (Disney+) 3 out of 5

THE SINNERS: Teen classics like Scream and I Know What You Did Last Summer inspire this debut writing and directing effort by Courtney Paige, an actor in her other life. She filmed it in her hometown of Kelowna and that might add a bit of curiosity factor. Unfortunately, it needs a lot more. It’s engrossing, but awfully thin. Seven girls rebel against the dour strict ambience of their religious small town by taking the critics at their word. They’re called The Sins, so they run with it and each adopts the characteristics of one of the seven deadly sins. Kaitlyn Bernard is lust, Brenna Llewellyn is pride (and also the narrator), and so on.

Too bad they don’t have much to say, except maybe that they’re individuals and not to be treated and led like sheep. That’s my take on it. There’s not much of that actually said. It’s more an assertion of defiance of a sort, like, “If people wanna talk, let’s give them something to talk about.” When they start being killed off one by one, the teen classics echo from those years ago. A couple of big-town cops, a girl’s journal, bonding like sisters and a guy in a mask figure in the story, but not all that well. (Apple TV, Cineplex, Rogers, Shaw, Telus and other platforms.) 2 out of 5

SYNCHRONIC: Not that time travel films are ever logical, but this one goes too far off the track. A pill that sends you back in time? That’s new to me, probably because it’s not an idea that has been used very often. If ever. Anthony Mackie and Jamie Dornan encounter it as paramedics in New Orleans. They deal with overdoses brought on by a designer drug that’s new to them. People die, one guy with huge sword slashes.

We’re alerted in an opening sequence where a character rides an elevator, sees a caveman and a snake and falls down on a desert sand dune. Alerted, but what is it about? Later we learn. Mackie learns too when he takes the drug himself. He’s back in old New Orleans, on a plantation, in the ice age and more. If this was an allegory about thinking back to where his people once were you’d have something. It doesn’t seem to be that. He really does face a Confederate soldier and a primitive man. It’s visually interesting, but not pleasing to my thinking faculties. There’s also much about the real-life problems the two men have to deal with, but they don’t help. (Rent or buy at Google Play, Amazon and others.) 2½ out of 5

Reviewing a gem from the Victoria Film Festival, a couple’s loud, long night, and a screwy worldview