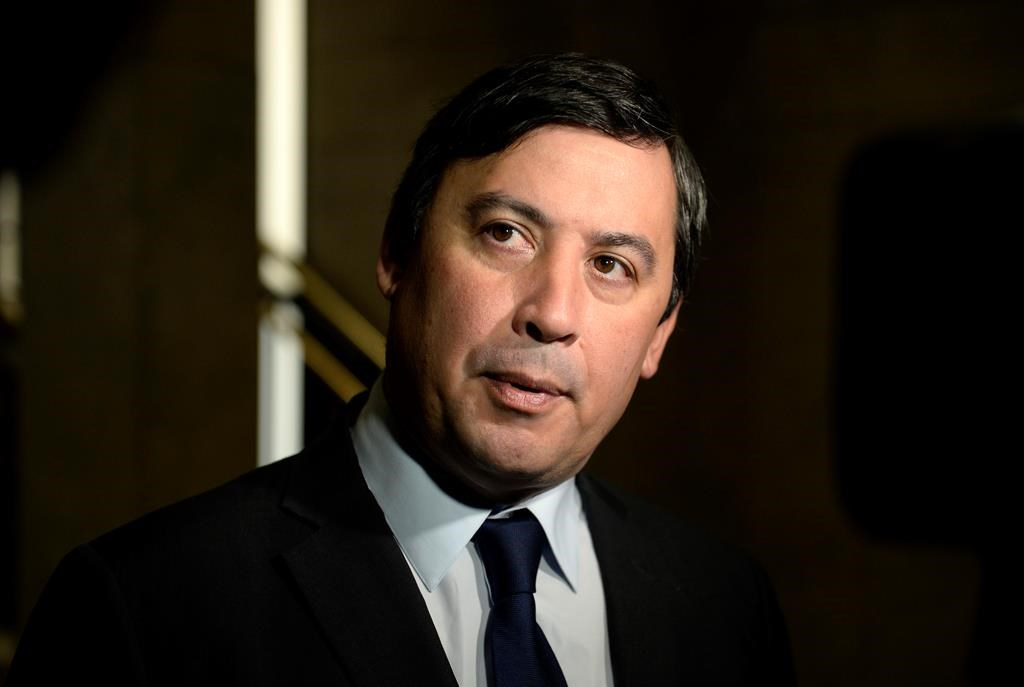 Conservative MP Michael Chong speaks to reporters as he arrives for a Conservative caucus retreat on Parliament Hill in Ottawa, on Friday, Jan. 24, 2020. THE CANADIAN PRESS/Justin Tang
Previous story
Next story

Liberal backbenchers answered the Conservative call to back what was a largely symbolic declaration. Prime Minister Justin Trudeau and all but one of his cabinet ministers did not take part in the politically charged vote, which took place mainly over video, and against the backdrop of all-but-frozen relations between Beijing and Ottawa.

China has imprisoned two Canadian men, Michael Kovrig and Michael Spavor, on what the government and dozens of its allies say are bogus charges in retaliation for the RCMP's December 2018 arrest of Huawei executive Meng Wanzhou on a U.S. extradition warrant.

Foreign Affairs Minister Marc Garneau said he was registering a formal abstention on behalf of the government, drawing audible jeers over the video feed.

Garneau said before and after the vote that Canada takes the genocide allegations against China seriously and wants them thoroughly investigated by a credible and independent international body.

“We remain deeply disturbed by horrific reports of human rights violations in Xinjiang, including the use of arbitrary detention, political re-education, forced labour, torture and forced sterilization," Garneau said in a statement afterwards.

"The free vote in Parliament ensures each member can make a determination based on available evidence … We welcome parliamentarians working together and debating this critical issue."

Trudeau has stopped short of agreeing with American officials, human rights advocates and legal scholars who argue the violations amount to a genocide, saying it is a loaded word that has to be used carefully. But he has said serious human rights abuses are taking place in the northwestern Chinese province.

Trudeau and U.S. President Joe Biden will be discussing China in their virtual meeting on Tuesday.

Dozens of Liberal MPs supported the Conservative motion, which passed by a 266-0 margin in the 338-seat Commons.

"We can no longer ignore this," said Conservative MP Michael Chong, the party's foreign affairs critic. "We must call it for what it is: a genocide." #cdnpoli #Uighur

Conservative Leader Erin O'Toole seized on the no-show to label the "co-ordinated absence" of Trudeau and his ministers as "shameful."

O'Toole said he wasn't worried about any economic blowback from a Chinese economic superpower that is clearly angered by the detention of Meng and the criticism of parliamentarians.

"Our values are not for sale. And Mr. Trudeau needed to send that message today," said O'Toole.

The Liberal support came after the Conservatives called on the party to support the party's motion earlier in the day.

Conservative MPs Michael Chong and Garnett Genuis were joined by Uighur community members at a teleconference Monday in calling for the government's support, suggesting that unanimity would send a strong signal to China.

Genuis, the critic for international development and human rights, said the Conservatives expected to have the support of opposition parties to pass the motion.

"New Democrats recognize that China's measures of mass detention, forced labour, surveillance and population control, such as forced sterilization, against Uighurs and Turkic Muslims in Xinjiang meet the definition of genocide," said NDP Leader Jagmeet Singh in a statement before the vote.

Bloc Québécois Leader Yves-François Blanchet and a Green Party spokesman said they were on board, too. MPs also voted for a Bloc amendment to expand the motion so that it would also call upon the International Olympic Committee to move the 2022 Olympic Games out of China if the genocide continues.

Earlier Monday, Chong dismissed the Chinese government's claims there is no genocide taking place in Xinjiang.

China's ambassador to Canada, Cong Peiwu, recently told The Canadian Press that reports of millions of people in detention camps being subjected to forced labour, sterilization and other abuse is simply unsubstantiated China-bashing.

Chong rejected that denial, saying there are reams of satellite images, smuggled video and documents, accounts from escaped Uighurs and undercover reporting by major American newspapers to document the atrocities.

The Tories were joined by Kalbinur Tursun, a Uighur who fled China and has spoken publicly against the Communist party's treatment of her people in Xinjiang.

Speaking through a translator provided by the party, she said the world didn't believe the horrors of the Holocaust until the concentration camps were exposed for all to see after the Second World War.

Two weeks ago, Tursun said Chinese police contacted her with "threatening texts and phone calls reminding me to cease talking." She said she was speaking publicly in an appeal to save the lives of her relatives back home.

"What we see before our eyes is not complicated. We see the existence of modern concentration camps," said Genuis.

"When you think of slaves being forced to pick cotton, you might initially think of images of the Antebellum South. But that description equally describes what is happening in Xinjiang."

Tories to urge Commons to declare crimes against Uighurs genocide