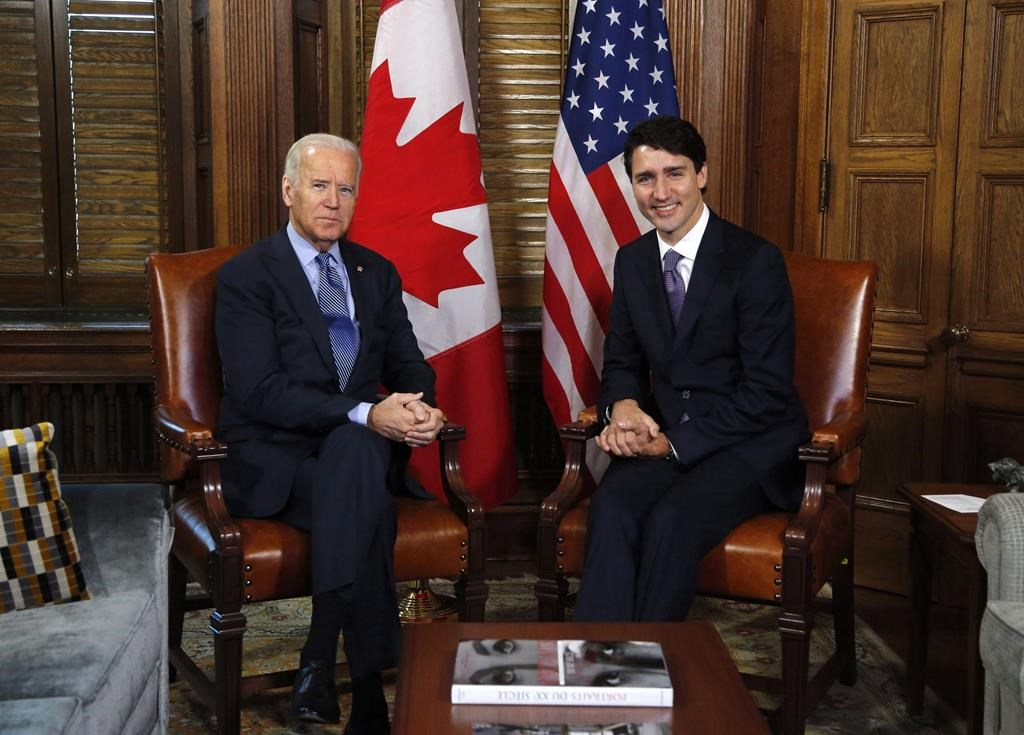 WASHINGTON — The White House did not acknowledge Canada's own wish list for President Joe Biden's meeting with Prime Minister Justin Trudeau, focusing instead Tuesday on areas of "shared vision" and "mutual concern."

The U.S. administration's "road map" for enhanced co-operation between the two countries lays out priorities for Biden's first bilateral meeting as president — a route that steers well clear of potential potholes.

"The road map is a blueprint for our whole-of-government relationship, based on our shared values and commitment to work in partnership on areas of mutual concern," the White House said.

It lays out six priority areas, including battling the pandemic, rebuilding the economy "on both sides of the border" and a "high-level climate ministerial" meeting to align efforts to reach net-zero emissions by 2050.

It also mentions social diversity and inclusion, expanded co-operation on continental defence and a modernized Norad, and restoring a collective commitment to global institutions like NATO and the World Trade Organization.

The section on "Building Back Better" — a turn of phrase from Biden's presidential campaign that's also popular with the Trudeau government — pays tribute to Liberal election rhetoric as well, promising a vision "that strengthens the middle class and creates more opportunities for hard-working people to join it."

A number of Canada's explicit priorities, including access to COVID-19 vaccines, freeing Michael Spavor and Michael Kovrig from China or securing an exemption to Buy American, are conspicuously absent.

So, too, is any mention of Keystone XL, the on-again, off-again cross-border pipeline expansion Biden cancelled with the stroke of his presidential pen on his first day in office.

The president has long believed the project was not in the best interests of the U.S. and had promised during the election campaign to cancel it, White House press secretary Jen Psaki said Tuesday.

"We want to try to address our climate crisis while also creating good-paying union jobs," Psaki said. "He believes you can do both."

The White House did not acknowledge Canada's own wish list for President Joe Biden's meeting with Prime Minister Justin Trudeau, focusing instead Tuesday on areas of "shared vision" and "mutual concern." #cdnpoli #uspoli

Don't look for any promises from the president on that front, Psaki warned: "I don't expect him to make any commitments in the meeting today."

Trudeau is also likely to seek Biden's help with vaccines, since Canada has been squeezed by production problems in Europe — and is only a two-hour drive away from a prominent Pfizer manufacturing facility in Michigan.

Again, no promises, said Psaki, noting that Job 1 for the president is making sure every American gets vaccinated as soon as possible.

"Our focus right now is getting shots in arms at home," she said. "All options are on the table down the road, but … we remain committed to getting Americans vaccinated."

Trudeau will also ask for help with Spavor and Kovrig, who were detained in an apparent act of retaliation after Canada arrested Huawei executive Meng Wanzhou in December 2018 on U.S. charges of violating sanctions on Iran.

The White House also says the two leaders plan to resurrect the North American Leaders' Summit — a trilateral meeting of Canada, the U.S. and Mexico, more commonly known as the "Three Amigos" summit, which hasn't been convened since 2016.

Eric Miller, a Canada-U.S. expert and president of the D.C.-based Rideau Potomac Strategy Group, said the synchronicity between the two leaders is why Trudeau needs to seize the moment.

"To me, this is exactly the moment for Canada to go on offence," Miller said.

The Biden administration and the Trudeau government have aligned interests on climate change, a multilateral foreign policy and on a new approach to China, he said.

And Biden, an outspoken champion of unions, needs to be careful not to run afoul of organized labour groups with large memberships on opposite sides of the border.

"If I were Canada, I'd be pitching very strongly for a Buy American agreement — I mean, the worst they can say is no," Miller said.

Blue-collar workers in Canada "are pretty much exactly the same as their U.S. counterparts. Why are you going to hit them with restrictions when it's like hitting your cousin?"

"If the president can be convinced to include Canada as a partner in his plans on these priorities, it would mean more jobs and opportunity in both countries," Neumann said in a statement.

"If the prime minister lets Canada get left out of the new president's plans to grow the American economy, Canadian workers will be left on the outside looking in."

"A lot of the things that President Biden (is) committing to do are things that we want Justin Trudeau to do," he said.

Annamie Paul, the federal leader of the Green Party, urged Trudeau to push Biden on one area where the two governments see eye to eye: climate change.

She called for higher greenhouse-gas emissions targets, a "carbon border" to prevent foreign imports from countries with weaker climate commitments, a modernized green-energy infrastructure and treating climate change as a threat to national security in both countries.

"The prime minister should be seeking to match President Biden's decisive leadership on the climate crisis, and his progressive policy ideas," Paul said.

"We have a chance to set a new direction, and that can start with this meeting."

If Canada can survive Trump, it can handle new Buy American regime: Trudeau