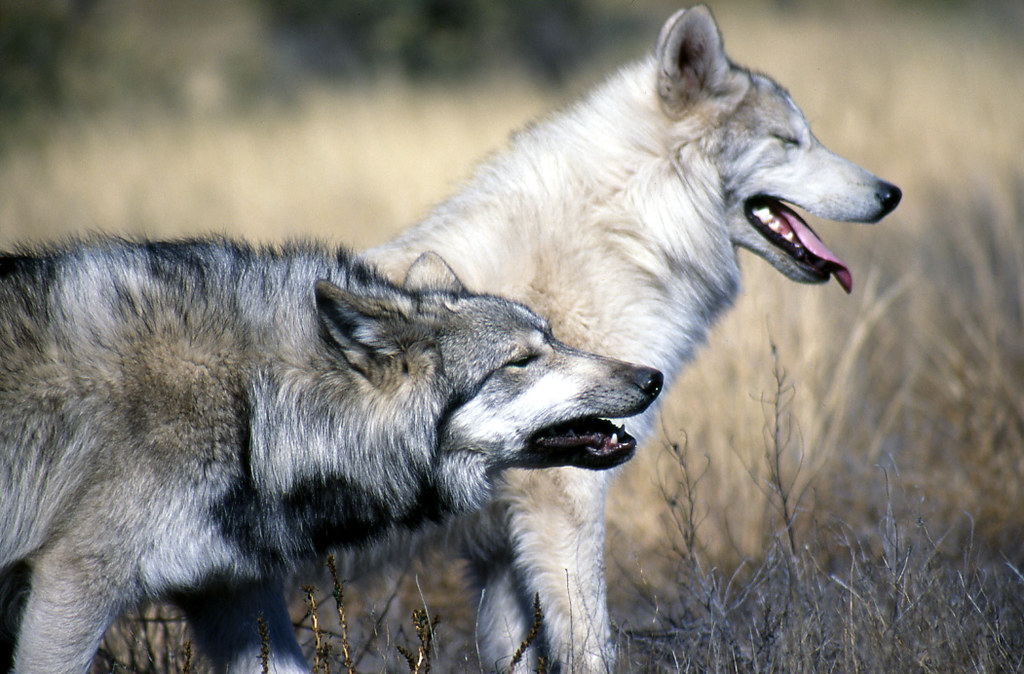 Two grey wolves similar to those open to hunters in Wisconsin. Photo by Caninest/Flickr (CC BY 2.0)
Previous story
Next story

Nearly 20 per cent of all the wolves in Wisconsin are marked for death this week after a hunting group based in Kansas won a court appeal to rush the hunting season.

“We expect this to be detrimental to our wolf population,” Friends of the Wisconsin Wolf and Wildlife executive director Melissa Smith told the Wisconsin Public News Service. “You remove one (wolf), you’re essentially destabilizing and killing the entire pack.”

Because of the timing of the hunt, during breeding season, pregnant wolves will likely be killed.

“We’re disturbed to see the wolf hunt launch with practically no process or public engagement,” Elizabeth Ward, director of the Wisconsin Sierra Club Chapter, said in a statement. “This hunt represents an unprecedented and extreme departure from sound, science-based wildlife practices.”

Wolves lost protections in the waning days of the Trump administration against the objections of wildlife associations and environmental organizations. The U.S. Fish and Wildlife Service delisted grey wolves as endangered on Jan. 4, eliminating protections under the federal Endangered Species Act.

Earlier this month, the Wisconsin Institute of Law and Liberty filed suit against the state’s Department of Natural Resources (DNR) on behalf of Hunter Nation, a Kansas-based hunting group, demanding to hold the week-long hunt starting Monday. Republican state lawmakers also wanted to hurry the hunt because they feared President Joe Biden would reinstitute protections, The Associated Press reported.

The DNR had planned a wolf-hunting season in the state, just not until November, long after spring birthing. Such a delay would give pups time to grow and allow for a thorough assessment of the wolf population, public input and planning.

However, a Jefferson County Circuit Court judge ruled this month that the DNR had overlooked its duty to hold a wolf hunting season this winter. The Court of Appeals on Friday then dismissed the DNR’s bid to overturn that decision, ruling that “this court lacks jurisdiction over a direct appeal at this time.”

U.S. courts side with hunters and now Wisconsin could lose up to 20 per cent of its wolf population. #hunters #wisconsin #wolves

More than 20,000 hunters have applied for permits, DNR officials told The Milwaukee Journal Sentinel, and some 4,000 permits costing US$49 each will be granted.

Although the hunt is scheduled through Feb. 28, it will continue until 200 wolves are slain. Adjustments may be made to that number, pending requests from Native American tribes in the state, which have hunting or wolf protection claims. The DNR estimated there were more than 1,000 wolves in 256 packs in the state.

Experts warn that the wolf population has not yet recovered and a hunt like this could put the animals back on the road to extinction. Native American tribes, some of whom revere the wolf as a sacred animal, are also opposed to the hunt.

Wolves native to the state were wiped out by the mid-1900s by unregulated hunting, poisoning and bounties. The species began recovering in the 1970s under increased protections.