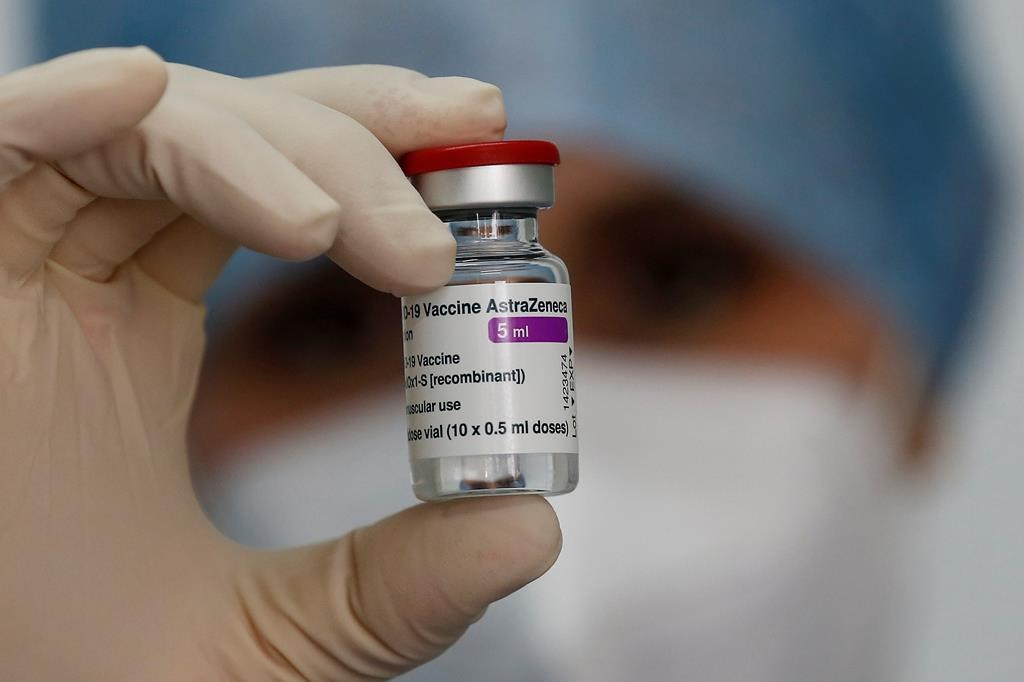 Health Canada has approved the COVID-19 vaccine from AstraZeneca, the third to be given the green light for national use. File photo by The Associated Press/Cecilia Fabiano/LaPresse via AP
Previous story
Next story

OTTAWA — Health Canada decided Friday to authorize the AstraZeneca vaccine and the first half million doses of it will be shipped to Canada next week.

The regulatory team reviewing COVID-19 vaccines said the one by AstraZeneca is both safe and effective and can be used immediately on people over the age of 18.

AstraZeneca joins the Pfizer-BioNTech and Moderna vaccines on the list of those authorized in Canada. Clinical trials showed it to be less effective at preventing infection than the first two, but it is still keeping people from getting very sick or dying, said Dr. Supriya Sharma, the chief medical adviser at Health Canada.

But Sharma said the "key numbers" to examine when looking at all the vaccines Canada has approved or is reviewing is whether they prevented serious illness and death.

It's not entirely clear yet how provinces and territories will incorporate the AstraZeneca vaccine into their vaccination programs, but because it is can be shipped and stored in refrigerators instead of freezers, it is a more flexible option.

Sharma said AstraZeneca's review process included not only the clinical trial data submitted by the company but also evidence of how the vaccine has been working in the real world. Millions of people in more than 50 countries have now received the vaccine since it was first approved at the end of December.

Health Canada has approved the #COVID19 vaccine from #AstraZeneca, the third to be given the green light for national use. #Covid19vaccine #CDNPoli

The addition of AstraZeneca should quicken that pace.

Canada is getting 24 million doses by September, and as many as one million by the end of March. That includes 20 million directly from AstraZeneca, and made in the United States, between April and September. Another 1.9 million doses made in South Korea and delivered via the vaccine sharing initiative known as COVAX are to come by the end of June, and the first 500,000 of those could be delivered in the next month.

Procurement Minister Anita Anand also said a deal to get another two million doses from the Serum Institute of India was finalized Thursday. Verity Pharmaceuticals, which is facilitating the Serum Institute's application in Canada, said Friday the first 500,000 will come next week, followed by one million in mid-April, and the rest in early May.

AstraZeneca vaccines are to be given in two doses between four and 12 weeks apart. Sharma said there is some indication that waiting longer provokes a better response, but that data is not yet complete.

There have been some concerns raised about the AstraZeneca vaccine in recent weeks, including how well it works against variants and whether there is enough data to show it works on older individuals.

Several European countries, including Germany and France, limited AstraZeneca to people under the age of 65. Sharma said there were a limited number of people over 65 involved in the clinical trials, but that data, coupled with the real-world experience in the United Kingdom, shows strong evidence seniors are protected.

The National Advisory Committee on Immunization will issue guidance for how best to use the vaccine in the next few days, said Sharma. Provinces can then determine how they will incorporate it into their planning.

Canada's vaccine program is shifting into a higher gear after a month-long slowdown in deliveries due to production issues for Pfizer and Moderna. More than 300,000 people were vaccinated in the last week, almost one-fifth of the total doses injected since the first vaccinations began Dec. 14.

As of Friday afternoon about 700,000 people have received one dose and more than 500,000 are now fully vaccinated with two doses.

The AstraZeneca vaccine works differently than the other two already in use in Canada.

Both Pfizer-BioNTech and Moderna use messenger RNA technology, using RNA encoded with the piece of the SARS-CoV-2 virus known as the spike protein. The mRNA trains the body to fight off a COVID-19 infection.

AstraZeneca is a viral vector vaccine, which takes a cold virus, modifies it so it can't reproduce itself, and adds the SARS-CoV-2 spike protein. When injected, it too provokes the body to develop infection-fighting antibodies and cells to fight the virus.

The U.S. Food and Drug Administration was meeting Friday to decide whether to authorize the vaccine from Johnson and Johnson, and Sharma said Health Canada was expecting some final data on manufacturing from that company Friday.

A fifth vaccine from Novavax expects to report clinical trial data in April, paving the way for Health Canada to make a decision about it this spring.

Those two vaccines would add another 62 million doses to Canada's supply.

Health Canada not yet ready to approve AstraZeneca vaccine