Some Quebec movie theatres reopen Friday, but not allowed to sell food 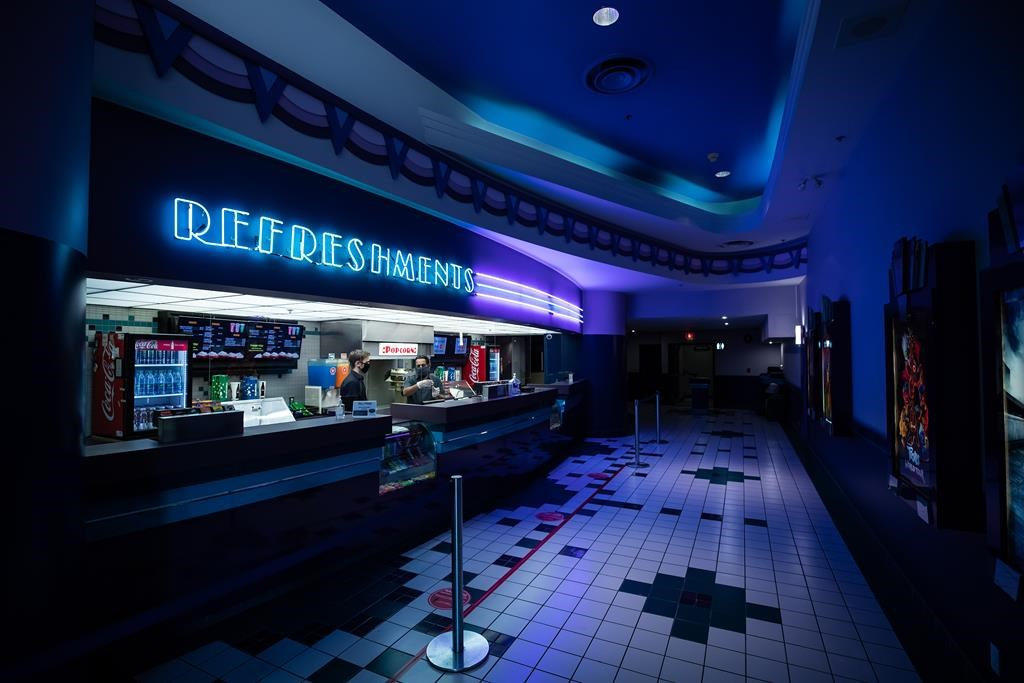 A concession stand at a cinema is shown in Surrey, B.C., on Sunday, June 28, 2020. File photo by The Canadian Press/Darryl Dyck
Previous story
Next story

Movie theatres in Quebec were allowed to reopen Friday, but owners are wondering how long they can operate without selling food and with customers who have to be home by 8 p.m.

Eric Bouchard, co-president of a movie theatre owner group, Association des proprietaires de cinemas du Quebec, said his members planned to reopen their doors Friday after their businesses had been shut down by the government since October. Revenue, he said, is expected to be much lower than usual.

"Not being able to show films in the evening because of the curfew and not selling food makes our business model very difficult in terms of profitability," Bouchard said in a recent interview.

At least one major theatre owner says the rules make it impossible for him to reopen, while those who welcomed patrons back on Friday say they aren't sure the government's plan is sustainable.

Quebec Premier Francois Legault said he opened movie theatres to give families something to do during March break week, which begins Monday.

But he ordered theatres in "red" pandemic-alert zones — such as Montreal and Quebec City — to keep their concession stands closed because he wants moviegoers to keep their masks on throughout the duration of the films. Residents in red zones are still under an 8 p.m. to 5 a.m. curfew, forcing movie theatres to limit their schedules.

Bouchard said he hopes families will come during the day next week because kids will be off school. "What we've decided is to reopen because we think that with the spring break, we can limit our losses. It will be very difficult afterwards."

Legault has offered compensation to theatre owners, but Bouchard said the subsidies aren't enough to make up for the lack of food sales or evening shows.

The government is permitting theatres to continue benefiting from a provincial program designed to keep companies afloat during government-mandated closures. Theatres can continue collecting those cheques for two months after they reopen, Jean-Pierre D’Auteuil, a spokesman for Quebec's Economy Department, wrote in an email.

That program provides loans to businesses to cover fixed costs. The government is willing to forgive up to $15,000 of those loans per month.

Vincenzo Guzzo, the CEO of Cinemas Guzzo, which operates 10 theatres in the Montreal area, said his theatres will stay closed for now. Reopening without evening shows or concession sales would be a money-losing proposition, he said.

Historically during spring break, he added, 50 per cent of his revenue came from daytime screenings, with the rest coming from evening shows. In a regular week, his theatres only offer daytime screenings on the weekends.

The government support program is insulting, Guzzo said. "You haven't even re-gifted a gift, you took the same gift you gave me last week, you took it back, you repackaged it, and now gave it to me for St. Valentine's Day."

He said if the government offered him more money he would reject it on principle. During a pandemic, he said, "there's no way I will be accused of taking public money to open my theatres."

During the three months last summer when cinemas were open in Quebec, he said there wasn't a single reported case of COVID-19 transmission at movie theatres. "Not in our theatres, not in any theatre in Quebec, not in any here in Canada," he said.

And while Guzzo is saying no to the money, other theatre operators in Quebec don't have access to it.

Daniel Seguin, senior vice-president at Cineplex, said his company isn't eligible for the government aid because it's headquartered in Toronto. The ban on concession sales, he added, "really does not help us financially."

That ban caught him by surprise, he said. "It was a surprise because this is not something we have anywhere else in Canada."

Still, Cineplex plans to reopen Friday, he said. "After five months, our goal here is to get the theatres open."

In 2019, around a quarter of the company's revenue came from food sales, according to its annual report.

Bouchard, who co-owns two theatres in Montreal suburbs, said he hopes the rules will be relaxed so he can have evening screenings and start selling the snacks that are part of the moviegoing experience.

"We don't want to live on subsidies, what we want is to operate our cinemas, welcome people, enjoy movies, make everyone happy; that's what we want to do," he said.