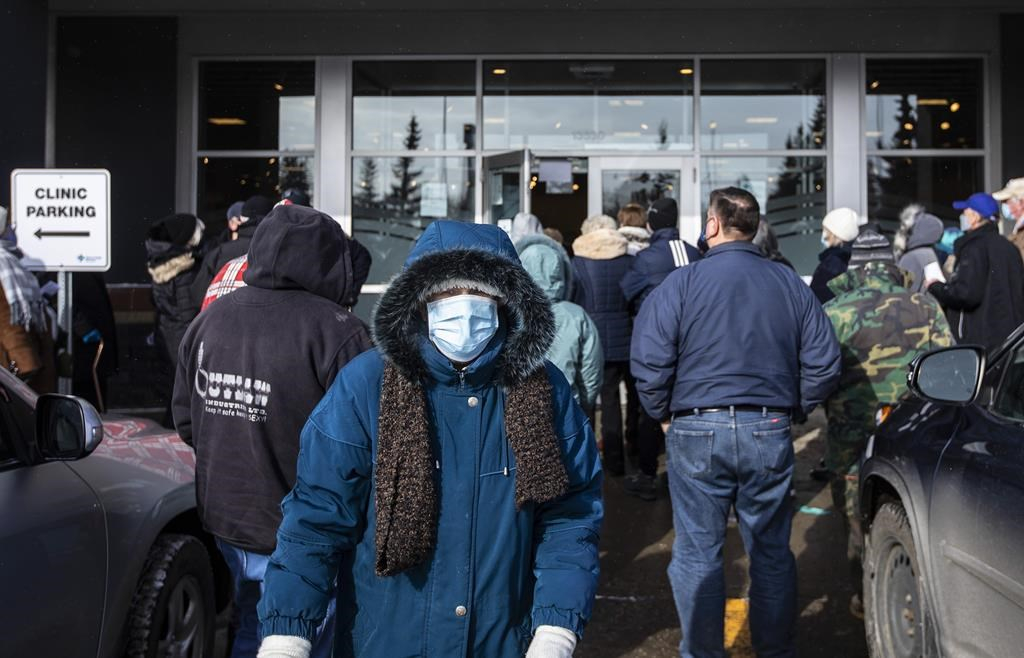 People line up outside a vaccine clinic as seniors wait to get the COVID-19 vaccine in Edmonton Alta, on Friday, February 26, 2021. File photo by The Canadian Press/Jason Franson
Previous story
Next story

Alberta is opening up libraries and allowing low-intensity indoor group fitness workouts, like Pilates and tai chi, while it continues to monitor rates of COVID-19.

The change is a fraction of what had been expected under the second phase of the province's economic relaunch plan.

That phase was also to include expanded crowds in retail stores and eased restrictions on hotels, conference centres and community halls.

But Premier Jason Kenney said with case numbers starting to plateau and the danger of COVID-19 variants spreading exponentially, those other changes are on hold.

“We’re not out of the woods, but we can continue taking small steps forward,” Kenney told a news conference Monday.

“We cannot and we must not allow exponential growth to start to take hold, driven by these new more contagious variants, as we’ve seen in many countries around the world.

“To do so would end up in weeks jeopardizing our health-care system.”

Health Minister Tyler Shandro said libraries can open at 15 per cent capacity, noting the facilities are critical, especially in rural areas where access to high-speed internet might be limited.

Three weeks ago, the government began to allow one-on-one fitness training and some group sports activities for youth.

#Alberta is opening up libraries and allowing low-intensity indoor group fitness workouts, like Pilates and tai chi, while it continues to monitor rates of #COVID19. #AbLeg #abpoli

However, high-intensity workouts, such as running on treadmills, are too risky and remain banned.

Dr. Deena Hinshaw, Alberta's chief medical officer of health, reported 291 new cases of the virus Monday. There were 257 people in hospital, 48 of them in intensive care, well down from the 900-plus people in hospital two months ago.

Alberta’s testing positivity rate, as low as 3.2 per cent three weeks ago, is now routinely above four per cent and was 4.9 per cent Monday.

There were 35 new variant cases, pushing that total in Alberta to 457. The virus reproduction rate, known as the R-value, remained slightly above one, suggesting transmission rates remain on the rise.

Alberta is well into its second round of economic lockdowns tied to the second wave of the novel coronavirus.

The latest round was launched in mid-December, as case rates soared, forcing hospitals to cancel non-urgent surgeries and reassign patients and staff. A field hospital was prepped at the University of Alberta.

Since then, the province has been easing the rules — too much for some critics, such as the Edmonton Zone Medical Staff Association, and too little for others, including outspoken backbench members of Kenney’s own United Conservative caucus.

Retail shops and worship services are open at 15 per cent capacity. A ban remains on indoor gatherings, as Kenney says about 30 per cent of known transmissions are coming from these settings.

Outdoor gatherings are limited to 10 people.

In the first of the province's four-step plan to reopen the economy, restaurants were able to reopen to dine-in service, and one-on-one training was allowed to resume for sports and dance. Some restrictions were lifted on youth sports both in and out of school.

Kenney said the long-term solution remains getting more Albertans vaccinated and urged the federal government to push for more doses.

About 235,000 Albertans have received a vaccine shot, including 88,000 who have the required two doses.

Alberta has already vaccinated its highest-risk patients — those in long-term care and designated supportive living facilities — and is well into next priority cases.

It is booking appointments for seniors older than 75 and for those in First Nations older than 65. Residents in other care homes, such as seniors lodges, are also being vaccinated.

The federal government approved last week a third vaccine, Oxford-AstraZeneca. However, the National Advisory Committee on Immunizations is not recommending the vaccine for those over 65, as data is limited on how well it works in older populations.

Shandro said Alberta will take that advice. “How that will change the administration of those who are in (the current vaccination phase) is still to be determined,” he said.

Alberta to ease some COVID-19 restrictions