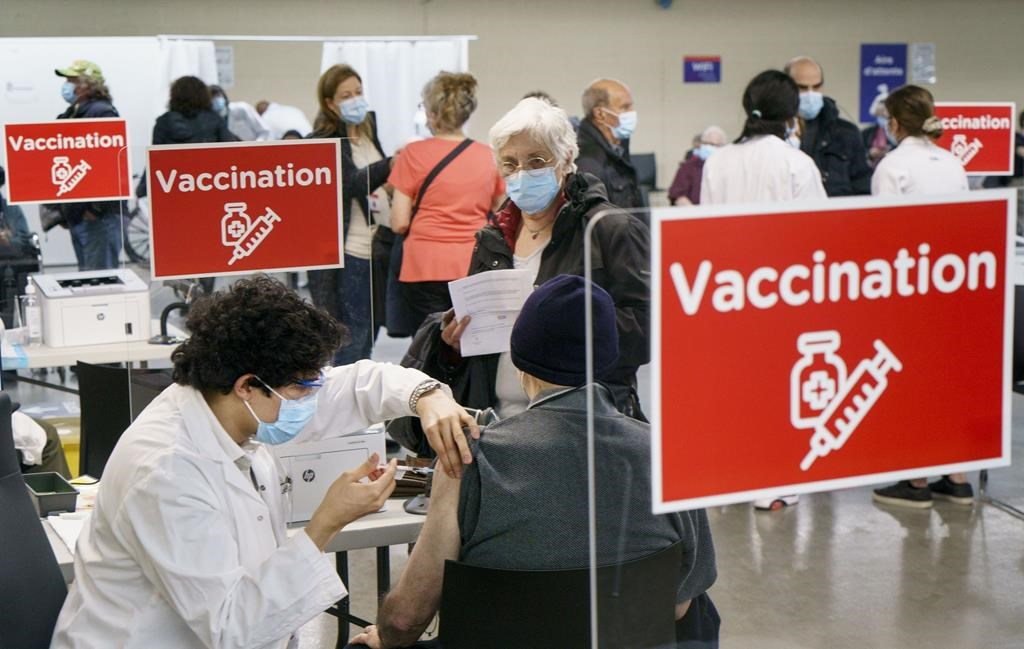 A man receives his COVID-19 vaccine at a clinic at Olympic Stadium marking the beginning of mass vaccination in the Province of Quebec based on age in Montreal, on Monday, March 1, 2021. Photo by The Canadian Press/Paul Chiasson
Previous story
Next story

A majority of Canadians believe Ottawa will follow through on its plan to provide enough COVID-19 vaccine doses for everyone who wants a shot by the fall, a new poll suggests.

Fifty-six per cent of respondents are confident the federal government can buy enough vaccine to ensure inoculation for those who seek it by September, according to an online survey by Léger and the Association for Canadian Studies.

Canadians on both coasts and in Quebec were optimistic about their provinces' rollout plans as well as that of the feds. Respondents in Ontario and the Prairies were more skeptical, with just one in three Albertans expressing faith in their government's delivery scheme.

The poll also found that most residents are in no rush to lift anti-pandemic lockdowns, with two-thirds saying restrictions should remain at least until half the population is immunized.

"There’s been a bit of a change over the past couple of weeks," Bourque said in an interview.

"The news we got about the doses coming in from Pfizer and the new doses acquired from (Moderna) plus the fact that we approved AstraZeneca … all of these elements together have actually had some positive influence on Canadians’ confidence that we will get vaccinated before the deadline that the federal government set for itself."

Prime Minister Justin Trudeau has repeatedly promised to secure enough doses to immunize all willing Canadians by the end of September.

The Public Health Agency of Canada is currently expecting delivery of about 445,000 doses of various vaccines this week, following last week’s record high of 640,000 doses in a seven-day period.

It's unclear when the first doses of the AstraZeneca vaccine — approved by the public-health agency on Friday — will arrive in the country, but a senior government official told The Canadian Press on background the first doses could land as early as mid-week, boosting the total.

A majority of Canadians believe Ottawa will follow through on its plan to provide enough #COVID19 vaccine doses by the fall, a new poll suggests. #Covid19vaccine

Now, attention turns to the provinces as shipments start to pour in and provincial administration is put to the test.

Despite the challenges of ongoing public health restrictions, the more prudent strain of Canada's national character is visible behind the responses to the Léger survey, Bourque suggested.

"The majority of Canadians are extremely careful about what should happen and when, depending on the pace at which we vaccinate," he said, referring to lockdown lifts.