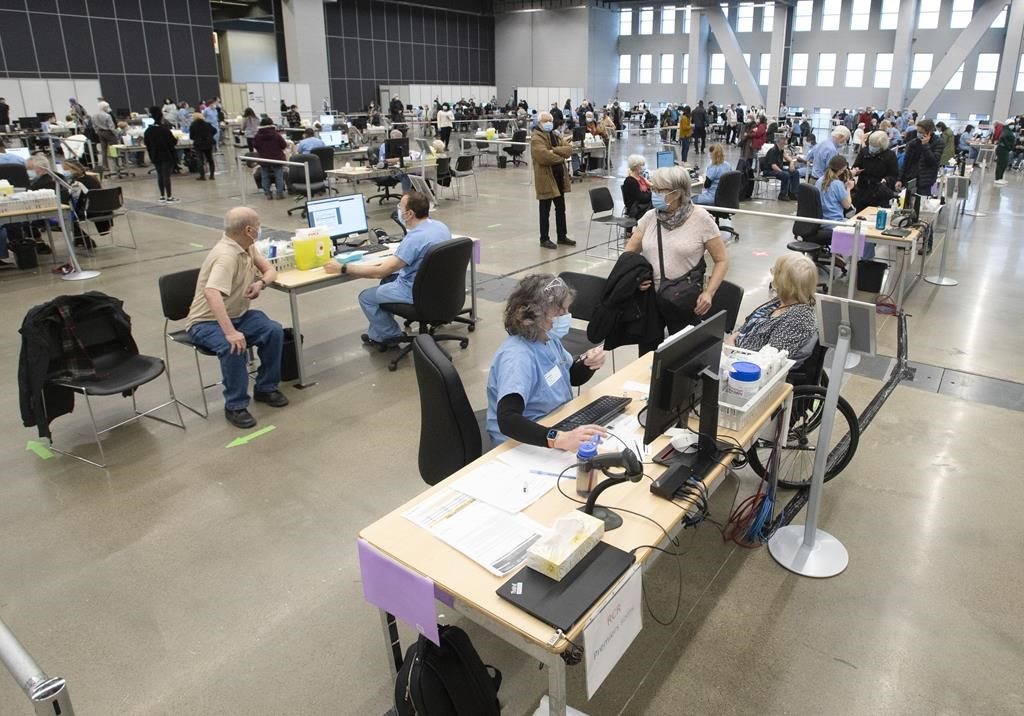 Seniors receive their COVID-19 vaccinations at the Palais de Congress site as Quebec begins mass vaccinations based on age across the province, on Monday, March 1, 2021 in Montreal. Photo by The Canadian Press/Ryan Remiorz
Previous story
Next story

Several provinces began expanding their COVID-19 vaccination programs to members of the general population on Monday, as new recommendations on the use of the AstraZeneca vaccine suggested it should be targeted at younger Canadians.

A national panel of vaccine experts said provinces should not use the newly approved vaccine on people 65 and over out of concern there is limited data on how well the vaccine will work in older populations — even though Health Canada approved the vaccine for all adults.

Rather, the recommendations issued by the National Advisory Committee on Immunization noted that the AstraZeneca vaccine could help speed up vaccination for younger age groups, who otherwise would have to wait longer for protection.

The arrival of a third vaccine raises the prospect of further accelerating Canada's efforts to inoculate the general population, which hit a new gear Monday in several provinces.

Ontario, Quebec and B.C. started or announced plans to start vaccinating older seniors living in the community on Monday, after a first phase that focused largely on health-care workers, remote communities and long-term care.

In Montreal, mass vaccine sites including the Olympic Stadium opened their doors to the public as the province began inoculating seniors who live in the hard-hit city.

The government announced last week it would begin booking appointments for those aged 85 and up across the province, but that age limit has since dropped to 70 in some regions, including Montreal. The province has already finished vaccinating long-term care residents with a first dose and was almost finished in private seniors homes, the premier said Saturday.

There were long lineups and some frustration among vaccine recipients at the Olympic Stadium, but at another site, Montreal's downtown convention centre, people reported a swift process.

Julie Provencher, a spokeswoman with the regional health authority asked people not to be too harsh. "For the first day of the biggest mass vaccination in the history of humanity, I think it's going OK," she said in an interview.

Some health units reported thousands of bookings and high call volumes, as regions such as York, Windsor-Essex and Hamilton began taking appointments for seniors aged 80 or 85 and up, depending on the region.

#Vaccination ramps up in several provinces as panel issues guidelines on #AstraZeneca. #CDNPoli

In York Region — where those aged 80 and older could start scheduling and receiving their shots on Monday — vaccination clinics were fully booked just two hours after they started taking appointments, according to a spokesman.

“At this time residents are urged to remain patient and will be notified as more appointment bookings become available,” Patrick Casey said in a statement.

A similar problem occurred in Nova Scotia, where the COVID-19 vaccination-booking web page was taken off-line Monday after it experienced technical issues the first day it opened to people aged 80 and over. The Health Department said high traffic to the site prompted the slowdown and suggested people could book by phone in the meantime.

In British Columbia, Premier John Horgan and provincial health officer Dr. Bonnie Henry outlined the next phase of the province's immunization plan, which covers all seniors 80 and over and Indigenous seniors 65 and up.

Despite the good news, Horgan warned that the province still has several difficult months to come. "Although there is light at the end of the tunnel, we’re far from out of this," he said.

The Public Health Agency of Canada is expecting delivery of about 445,000 doses of the Pfizer-BioNTech vaccine this week and none from Moderna — numbers that are down from last week's all-time high.

It's unclear when the first doses of the AstraZeneca vaccine will arrive in the country, but a senior government official told The Canadian Press on background Sunday it could be as early as midweek.

The advisory committee's recommendations raise the prospect of younger Canadians getting vaccine much earlier than originally planned.

There are no concerns that the vaccine is unsafe, but the panel said the mRNA vaccines from Pfizer-BioNTech and Moderna are preferred, especially for people 65 years old and above, "due to suggested superior efficacy."

The advisory committee said AstraZeneca should be offered to people under 65 as long as the benefits of getting a good vaccine early outweigh any limitations the vaccine may have in terms of effectiveness. It also noted that because AstraZeneca, unlike the first two vaccines, is stable at normal refrigerated temperatures, it allows for "a variety of alternate vaccination sites."

B.C. announced it would extend to four months the time between first and second doses of COVID-19 vaccine in order to allow the province to vaccinate more people sooner. Henry said the decision was based on evidence that showed the first two approved vaccines provide "a high level of real-world protection" after one dose.

Ontario confirmed Monday that it is considering following suit, adding that it's asking the federal government for guidance on possibly extending the intervals between doses.

Despite the positivity surrounding vaccines, some Canadians were returning to lockdown on Monday.

Those included residents of the Thunder Bay and Simcoe Muskoka health regions in Ontario as well as Prince Edward Island, which entered a 72-hour, provincewide lockdown Monday meant to stop two clusters of COVID-19 cases from spreading.

In Alberta, the government delayed part of its next reopening plan but said libraries can open their doors and low-intensity group activities, like Pilates, can resume in gyms.

— With files from Mia Rabson, Stephanie Marin and Holly McKenzie-Sutter