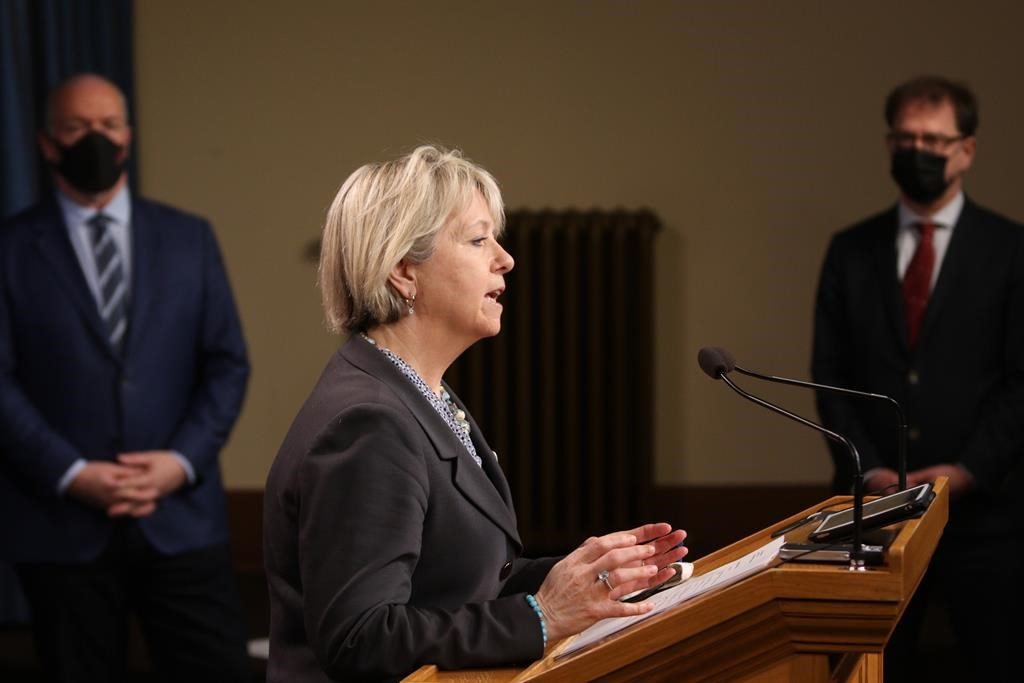 British Columbia health officials say their plan to delay the second dose of COVID-19 vaccine to four months is based on scientific evidence and real-world experience, as Ontario and Alberta consider following the province's lead.

Dr. Bonnie Henry, B.C.'s provincial health officer, responded Tuesday to criticism from Canada's chief science adviser. Henry said the decision was made in the context of limited supply and based on strong local and international data.

"This makes sense for us, knowing that it is a critical time right now with the limited amount of vaccines that we have in the coming weeks, to be able to provide that protection ... to everybody here," Henry said at a COVID-19 briefing.

"That is why we made the decision that we did."

Chief science adviser Mona Nemer told the CBC on Monday that B.C.'s plan amounts to a "population-level experiment" and that the data provided so far by Moderna and Pfizer-BioNTech is based on an interval of three to four weeks between doses.

Henry said the manufacturers structured their clinical trials that way to get the vaccines to market as quickly as possible, but research in B.C., Quebec, Israel and the United Kingdom has shown that first doses are highly effective.

The B.C. Centre for Disease Control examined the effects of a single dose on long-term care residents and health-care workers and found that it reduced the risk of the virus by up to 90 per cent within two to three weeks, Henry said.

"It is a little bit unfortunate that the national science adviser ... obviously was not involved in some of these discussions and decision-making and perhaps did not understand the context that this decision was made in," Henry said.

Dr. Danuta Skowronski, a B.C. Centre for Disease Control epidemiology lead whose work underpinned the province's plan, said Pfizer-BioNTech underestimated the efficacy of its first dose in its submissions to the U.S. Food and Drug Administration.

Skowronski said the company included data from the first two weeks after trial participants received the shot, a time when vaccines typically aren't effective. When she and her colleagues adjusted the data, they found it was 92 per cent effective, similar to the Moderna vaccine.

She said B.C.'s plan was based on the basic principles of vaccine science. The protection from a first dose of vaccine does not suddenly disappear, it gradually wanes over time, and scientists are typically more concerned about providing a second dose too soon rather than too late, she said.

"I think if the public had a chance to hear and to understand that, they would say, 'OK, this is not messing around. This is really managing risk in a way that maximizes protection to as many Canadians as possible.'"

Henry said she expects a statement soon from the National Advisory Committee on Immunization aligning with the province's decision, while Ontario Health Minister Christine Elliott said Tuesday she wanted to wait for such a recommendation.

Elliott said extending the interval between doses would allow the province to get some level of protection to more people.

"This would be a considerable change," she said.

"With the variants of concern out there, this could make a significant difference for Ontario in reducing hospitalizations and deaths. So, we are anxiously awaiting NACI's review of this to determine what they have to say in their recommendations."

Dr. Shelley Deeks, vice-chair of the national committee, said in an email the group is expected to issue a statement on extending the dose interval on Wednesday, but she did not confirm it would align with B.C.'s plan.

Alberta's health minister said a committee of COVID-19 experts is analyzing emerging data and a decision on whether to follow B.C.’s lead is coming.

"What the exact period of time (between doses) is going to be is still to be decided. We'll be announcing it soon, but we will be looking at having that length of time between first and second extended."

Alberto Martin, a University of Toronto immunology professor, said there is "obviously some concern" about B.C.'s plan because he is not aware of any clinical trial that examined a four-month gap between Pfizer-BioNTech or Moderna doses.

However, he said difficult times — when the vaccine supply is so limited — require drastic measures.

"It's a difficult decision to make. I don't know whether I'd like to be in that position, but I think it's understandable why they're doing this."

Daniel Coombs, a University of British Columbia mathematician who has done COVID-19 modelling, said Nemer was right that B.C. was conducting an "experiment," but it seemed to be a necessary one.

He added that the province may also be anticipating the approval of the Johnson and Johnson vaccine, which only requires one shot.

Michael Houghton, director of the Li Ka Shing Applied Virology Institute at the University of Alberta, said the Oxford-AstraZeneca vaccine data shows that one shot conveys 76 per cent protection for the next 12 weeks.

Houghton said he is more concerned about extending the dose interval to 16 weeks for the other two approved vaccines.

"These make vaccinologists nervous since, usually, we use in the real world what was tested in the clinic, but given the vaccine shortage, perhaps desperate times warrant such calculated gambles."

— With files from Holly McKenzie-Sutter in Toronto and Sylvia Strojek in Edmonton.