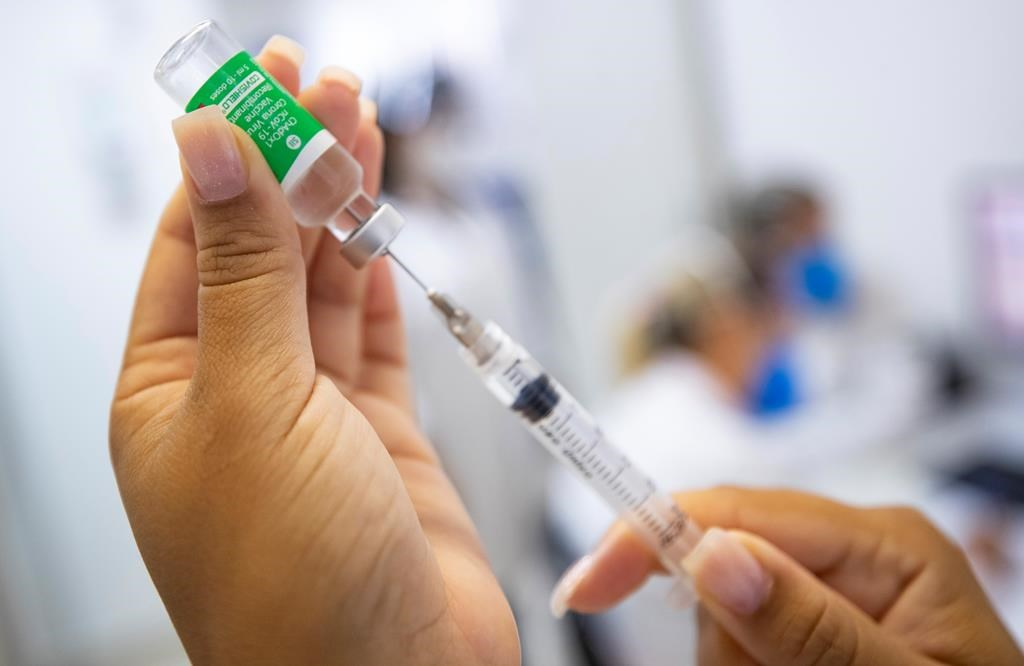 A nurse assistant prepares a dose of the Oxford-AstraZeneca vaccine for COVID-19 during a priority vaccination program for health workers at a community medical center in Sao Paulo, Brazil, on Feb. 3, 2021. File photo by The Associated Press/Andre Penner
Previous story
Next story

Essential workers who are more likely to contract and transmit COVID-19 should be prioritized for immunization with the Oxford-AstraZeneca vaccine now that a national panel is not recommending it for seniors, two experts say.

Caroline Colijn, a COVID-19 modeller and mathematician at Simon Fraser University, and Horatio Bach, an adjunct professor in the division of infectious diseases at the University of British Columbia, also say the Oxford-AstraZeneca vaccine could be better promoted by provincial health officials as a strong contender to the Pfizer-BioNTech and Moderna vaccines.

The National Advisory Committee on Immunization has recommended that the Oxford-AstraZeneca not be used for people 65 and over due to concern about limited data on how it will work in older populations, even after Health Canada authorized its use last week for all adults.

Oxford-AstraZeneca reported about 62 per cent effectiveness at preventing COVID-19 while Pifzer-BioNTech and Moderna have said the efficacy of their vaccines is about 95 per cent.

Colijn and Bach say the fact that there have been no hospitalizations from severe illness and no deaths among those using Oxford-AstraZeneca needs to be underscored because people awaiting immunization seem to be fixated on the higher efficacy data for the first two vaccines approved in Canada.

"If the AstraZeneca vaccine will prevent you from getting really sick that's still a win for you," Colijn said.

The national committee made its recommendation against vaccinating seniors with Oxford-AstraZeneca after several provinces announced their plans Monday to ramp up vaccination programs.

Canada has ordered 24 million doses of the vaccine, with most of them expected to arrive from the United States between April and September.

British Columbia's provincial health officer, Dr. Bonnie Henry, said essential workers including first responders, teachers and those who work in poultry factories where outbreaks have occurred may be offered the Oxford-AstraZeneca vaccine sooner, depending on availability.

She said that while people will have limited choice on whether they could wait for the other two vaccines they should take the first vaccine that is offered.

Colijn said that's all the more important if the wait for the Pfizer-BioNTech and Moderna vaccines is several weeks or even months off, meaning fewer people would be protected from the virus.

She suggested giving people a choice isn't the way to go when it comes to distributing the valuable resource of vaccines.

However, Bach said it would be unethical to not offer people a choice of vaccines in the same way they can make their own decisions on other aspects of their health care, though everyone should take the first vaccine they can get.

"I think the way we can attract more people is to tell them that is the reality. And repeat, repeat, repeat that more than likely you're not going to be hospitalized with disease."