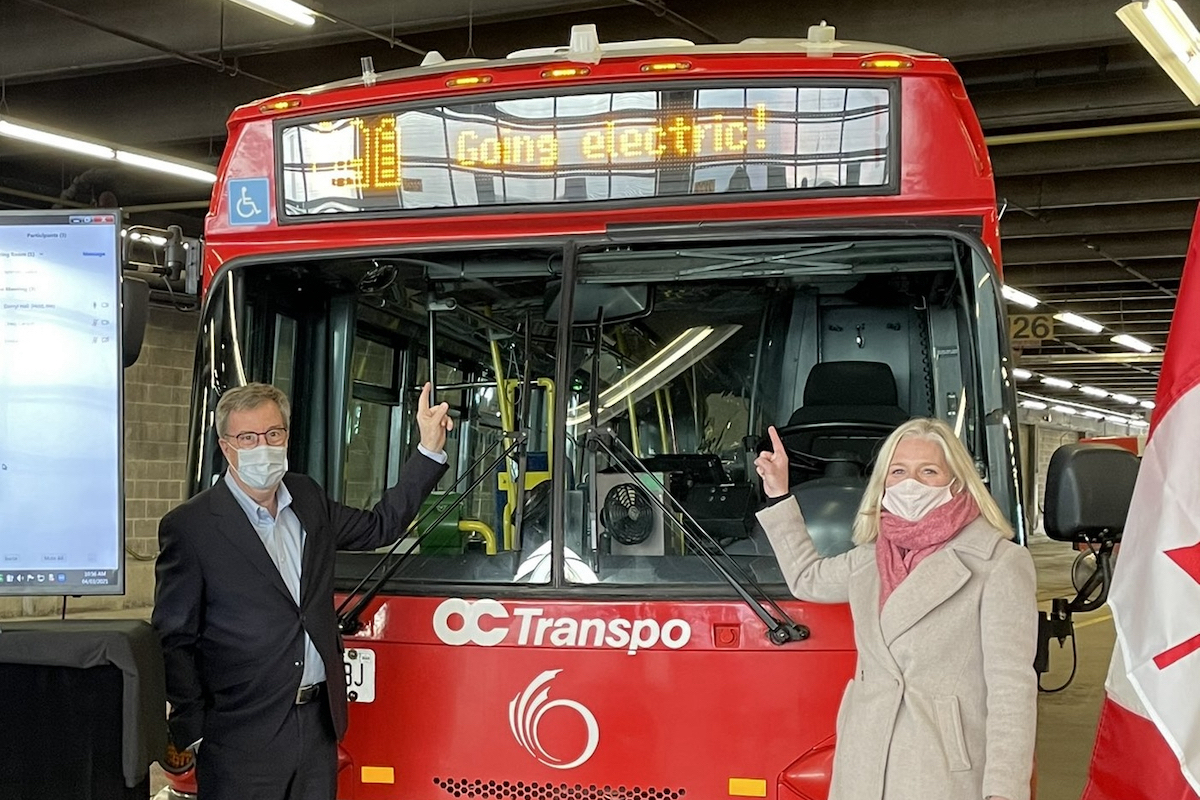 The federal government will invest $2.75 billion to help get 5,000 zero-emission buses on the road across Canada, Infrastructure Minister Catherine McKenna announced Thursday.

The grant is supposed to cover the upfront costs of buying the buses over the next five years. The Canada Infrastructure Bank has also committed $1.5 billion as part of its three-year, $10-billion growth plan specifically for zero-emission buses and related infrastructure.

Transportation is Canada’s second-largest source of greenhouse gas emissions, accounting for a quarter of total emissions, according to Environment and Climate Change Canada.

The money is coming out of the $14.9 billion in transit support over the next eight years that Prime Minister Justin Trudeau announced last month. It will go towards purchasing city and school buses, however McKenna acknowledged it won’t cover all necessary costs, such as charging stations on transit routes and in existing depots.

McKenna says that by 2023, all new federal investments in public transit will support zero-emission bus and rail systems.

Besides the environmental benefits, McKenna notes the economic upsides, too, with the investment to shift from diesel to electric being part of the feds' plan to create one million jobs.

The Liberals have also pledged permanent transit funding in their post-pandemic recovery strategy, including $3 billion annually starting in five years.

Infrastructure Canada's funding has already bought 300 buses, according to McKenna, who hopes to get to 5,000 “as quickly as possible.”

The money will go towards purchasing city and school buses, however McKenna acknowledged it won’t cover all necessary costs, such as charging stations on transit routes and in existing depots. #cdnpoli #electricvehicles

“Financing challenges are often the limiter to the development and expansion of fleet transit systems,” Cory said. “That’s why the combination of a grant from the government, a subsidy, combined with a loan against savings together will allow us to get the most done, allow us to make wholesale change quickly and do so at minimal impact to taxpayers.”

Cory says the bank will help cities and other fleet owners leverage the long-term savings of not having to buy diesel to pay off his agency’s loans.

Ottawa Mayor Jim Watson, who was also at Thursday’s announcement, says he’s keen on working with the feds on transit.

He’ll be rolling out an electric bus pilot program later in fall 2021 using four electric buses, which he says will each save 35,000 litres of fuel every year.

McKenna says the drop in transit ridership due to the pandemic wasn’t a factor in the decision to help turn cities’ bus fleets green.

“We recognize that we’re going to get out of this pandemic, but we’re still going to have a climate crisis,” McKenna said. “So we have to tackle emissions in our transportation sector.”

Note that the fuel savings is

You won't hear this from me

You won't hear this from me often: This is a good policy by the Liberals.
One question though: Where are they getting the buses? We should have taken over factories the big auto companies were closing in Ontario and used them to make these in Canada.

On the surface this seems

On the surface this seems like a progressive and green plan. But the money would have been better spent on the development of electric charging stations across the country.
Busses will only be applicable to cities that have a public transit system. Whereas much needed charging stations (particularly those with fast chargers) would benefit all cities and towns. It would also partially address the range anxiety issue facing those who want to buy electric vehicles and even assist cities that are committed to buying electric buses.
Wide-spread charging stations are crucial to the movement toward electric vehicles.