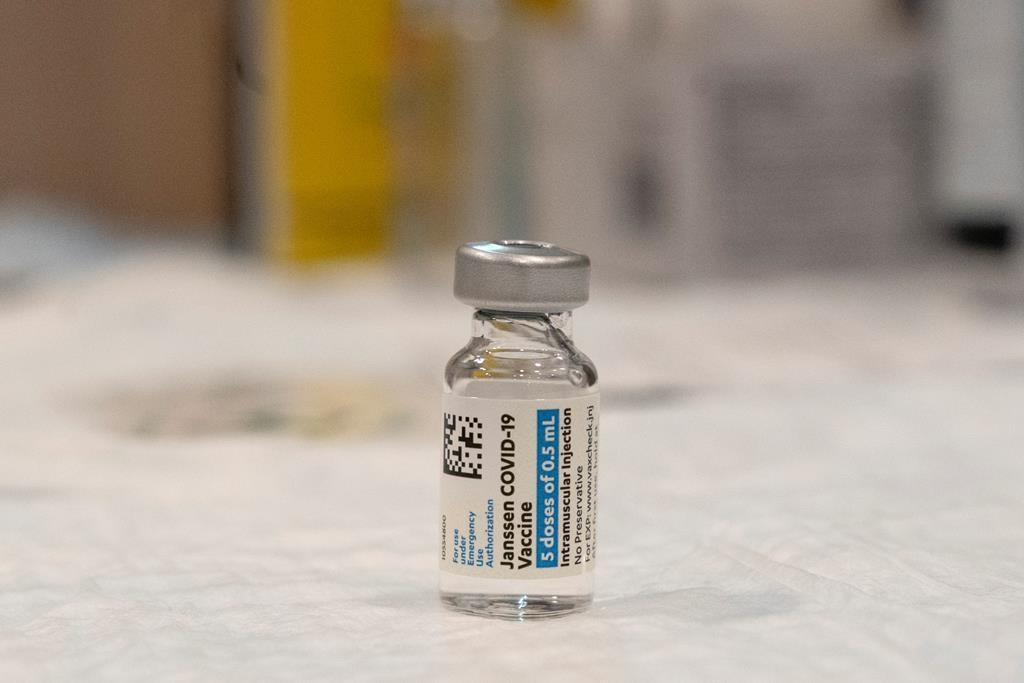 A vial of the Johnson & Johnson COVID-19 vaccine is displayed at South Shore University Hospital, on Wednesday, March 3, 2021 in Bay Shore, N.Y. File photo by The Associated Press/Mark Lennihan
Previous story
Next story

Some provinces are setting out on ambitious accelerations of their vaccine rollouts as Canada expands its stockpile of shots to protect against COVID-19.

Health Canada approved the COVID-19 vaccine from Johnson & Johnson on Friday, as federal officials announced that the manufacturer of the Pfizer-BioNTech vaccine was expediting shipments of 3.5 million doses to arrive before the summer.

As the country's vaccination campaign continues to gain steam, Prime Minister Justin Trudeau assured Canadians that a growing share of the population would soon be immunized.

"The people watching at home right now who are looking forward to getting their shot: Your turn is coming," Trudeau told a news conference Friday.

"We will continue to work around the clock to make sure Canadians get vaccinated as quickly as possible."

Several provinces readjusted their vaccine targets Friday to account for the flurry of promising developments over the past week, including two additions to Canada's vaccine portfolio and an expert panel's endorsement of a strategy to delay a second vaccine dose and at least partially inoculate as many people as quickly as possible.

The man in charge of Ontario's immunization plan expressed optimism that all adults could receive the first dose of a COVID-19 vaccine by June 20.

"We've had a seismic shift in our vaccination opportunities and the program to roll it out,'' said retired general Rick Hillier, the head of the province's vaccine task force.

The government said under the next phase of its plan, seniors aged 75 and older will start getting the shot in April, while everyone 60 and older will receive the first dose by the end of May or early June, if not earlier.

Officials noted that the updated timeline revealed on Friday didn't factor in the approval of the Johnson and Johnson vaccine or the additional Pfizer-BioNtech shipments, and these increases in supply could further accelerate the rollout.

Meanwhile, the Manitoba government is now predicting it will be able to offer all eligible adults the first dose of a COVID-19 vaccine this spring — months ahead of its previous plan to have everyone immunized by late summer to late fall.

Some provinces are setting out on ambitious accelerations of their vaccine rollouts as Canada expands its stockpile of shots to protect against #COVID19. #CDNPoli #Covid19vaccine

The province has decided to delay second doses by up to four months, saying this strategy shift has put it on track to ensure all eligible Manitobans receive their first dose sometime between mid-May and the end of June.

Nova Scotia Premier Iain Rankin called the federal go-ahead for the Johnson & Johnson vaccine a "positive step forward" Friday, as health officials geared up for the opening of the first of 10 community inoculation clinics across the province next week.

Rankin confirmed that the province would be adopting a 16-week interval between the first and second doses so all Nova Scotians who want to be vaccinated will get one shot by the end of June.

Alberta's Health Minister Tyler Shandro said he expects the approval of the Johnson and Johnson vaccine will speed up the province's rollout, but he's still awaiting word on how many doses will be available.

"We look forward to getting that information from the federal government so we can plan accordingly and understand how many more vaccines we'll be able to provide to Albertans," Shandro said at a news conference.

Earlier this week, Shandro announced that the province expects it will be able to offer all Albertans aged 18 and older a first dose of the vaccine by the end of June.

The Johnson & Johnson vaccine is the fourth shot to get the green light for use in Canada and the only one to require just a single dose.

Canada has pre-purchased 10 million doses of the Johnson & Johnson vaccine, and has options to buy another 28 million doses.

Authorities announced Friday that the manufacturer of the Pfizer-BioNTech vaccine has pushed up its shipment schedule to send an extra 1.5 million doses this month, and another two million doses in April and May.

Shipments of the two-dose Oxford-AstraZeneca vaccine, which Health Canada approved last Friday, are expected to be distributed across the country in coming weeks.

On Wednesday, a national panel of vaccine experts recommended that provinces extend the interval between the two doses of a COVID-19 shot to up to four months when faced with a limited supply, saying it will create opportunities to protect the entire adult population against the virus within a short timeframe.

Everything you need to know about the Johnson & Johnson vaccine