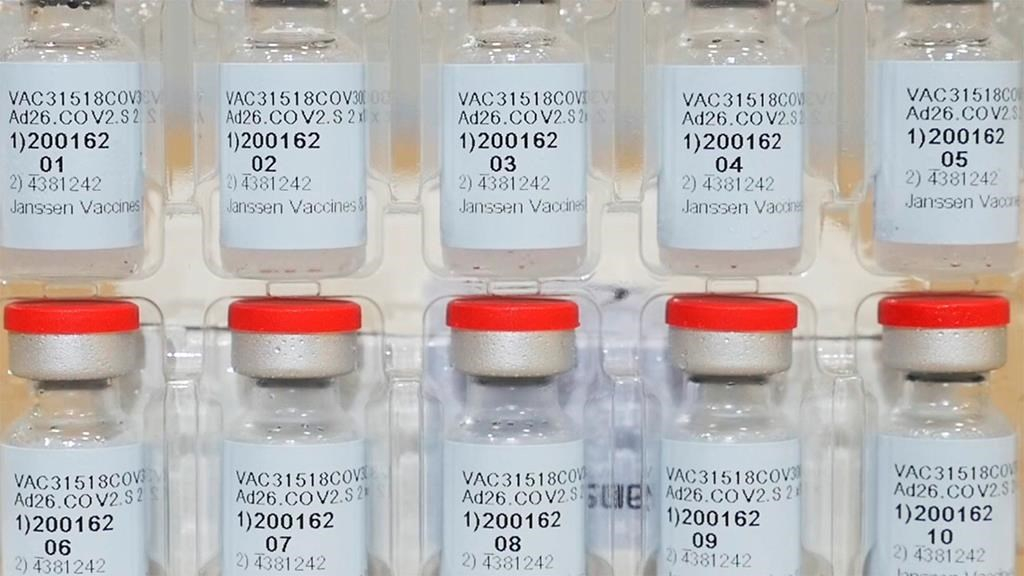 OTTAWA — The addition of another COVID-19 vaccine to Canada's arsenal and accelerated deliveries for another had government officials taking an optimistic tone Friday about the path of the pandemic in Canada.

Health Canada announced the approval of the COVID-19 vaccine from Johnson & Johnson, saying regulators have evidence showing the vaccine is both safe and effective against the novel coronavirus that causes the disease.

Meanwhile, Prime Minister Justin Trudeau also said Canada will get 1.5 million more doses of Pfizer-BioNTech's COVID-19 vaccine delivered this month, and another two million doses that were set to arrive in the summer will now come in April and May.

"We are expecting far more doses by September than there are Canadians, even given that we're only talking about doses from four different approved companies right now," Trudeau said Friday.

"We have reasons to be optimistic."

The Liberal government had originally set a target of the end of September for every Canadian "who wants one" to get a vaccine.

Despite the new vaccines coming online and accelerated timelines, the government has not yet formally moved up that schedule, having been burned by production and delivery delays last month.

Still, the approval of the Johnson & Johnson vaccine could markedly change the pace of vaccinations in Canada. It only requires a single dose and can be stored and transported at refrigerated temperatures for at least three months, facilitating distribution across the country.

There is no timeline yet for its delivery, with those details still being hammered out, federal Procurement Minister Anita Anand said.

Canada has pre-purchased 10 million doses of the Johnson & Johnson vaccine, developed by subsidiary Janssen Pharmaceuticals. Those are to be delivered by the end of September. Canada has options to buy another 28 million doses.

Health Canada has now approved four distinct COVID-19 vaccines, with the others being from Pfizer-BioNTech, Moderna and Oxford-AstraZeneca. The regulator includes a fifth on its list of authorized shots: Covishield, which is a separate brand name for doses of the Oxford-AstraZeneca vaccine produced at the Serum Institute of India.

Apart from the Johnson & Johnson vaccine, they all require two shots spaced weeks or months apart.

"We are expecting far more doses by September than there are Canadians, even given that we're only talking about doses from four different approved companies right now," the prime minister said Friday. "We have reasons to be optimistic." #COVID19

The National Advisory Committee on Immunization is in charge of helping shape the guidelines around who gets which vaccine and when, taking into account not just scientific information but demographic factors, supply and capacity for the provinces to deliver.

NACI recently signed off on spreading the time between doses to as much as four months, another change that could shape the pace of the national vaccine roll out.

How soon children, however, will be able to get a vaccine remains an open question. Clinical trials are underway to see if any or all of the approved vaccines will be approved for children, Dr. Supriya Sharma, the chief medical adviser at Health Canada, said Friday.

It will still be months yet before they will be able to get shots.

"Potentially, by the end of the calendar year, we might have some answers for children," she said.

J&J is approved for use in adults, and in clinical trials, was shown to be 66 per cent effective overall in preventing moderate to severe COVID-19, and was also shown to provide protection against some of the variants of the virus currently in circulation.

Sharma stressed no matter which vaccines Canadians get, they will help protect people from getting COVID-19, as well as becoming seriously ill.

The news from Pfizer that it will speed up deliveries comes after a marked delay in the national vaccination effort in January and February, when the company decided to upgrade production lines at a major factory in Belgium.

Production problems also slowed the initial rollout of the Johnson & Johnson vaccine in the U.S. after that country approved it in February.

Americans were to get 10 million doses as soon as the vaccine was approved but only four million doses had been shipped by March 1.

There remains only one more vaccine currently under review by Health Canada, called Novavax, and Sharma said a decision on whether it can be used in Canada is weeks or maybe even months away.