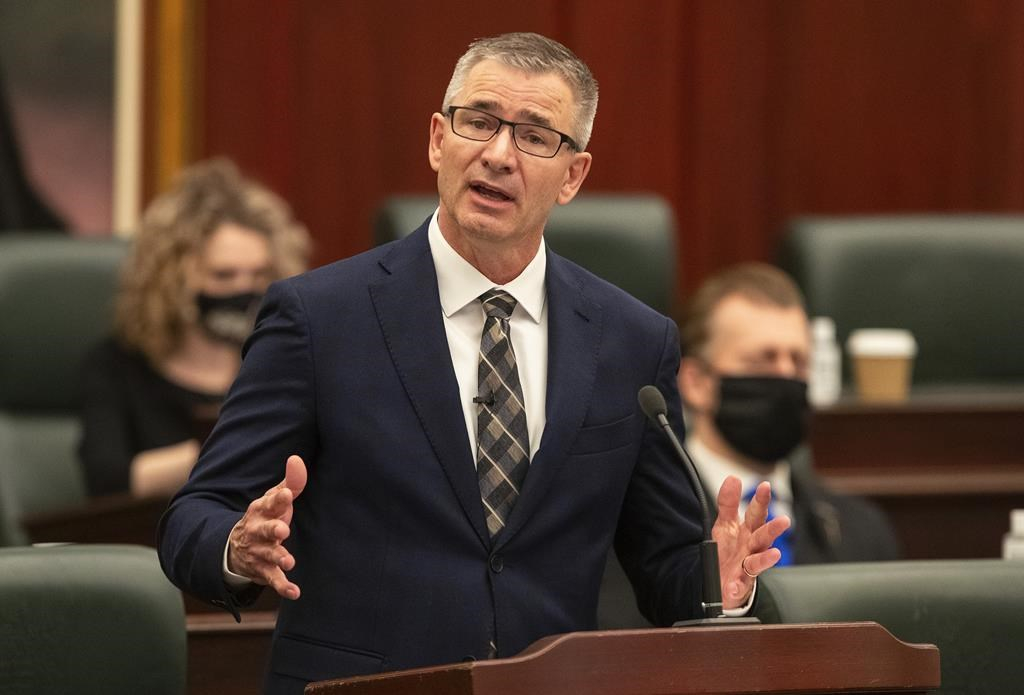 Alberta Minister of Finance and president of the Treasury Board Travis Toews delivers the 2021 budget in Edmonton, Alta., on Thursday Feb. 25, 2021. THE CANADIAN PRESS/Jason Franson
Previous story
Next story

EDMONTON — Alberta’s finance minister says taxpayers won’t be on the hook for much more beyond $1.3 billion already committed to the defunct Keystone XL oil pipeline.

“Our total exposure is just under $1.3 billion. It’s not expected to increase materially,” Travis Toews said Tuesday, responding to questions from Opposition NDP finance critic Shannon Phillips during committee deliberations on the 2021-22 budget.

The meeting also learned that while the $1.3-billion loss was not included in the budget's bottom line, it is being factored into government talking points.

The NDP has been asking for financial details ever since Premier Jason Kenney and his United Conservative government, in early 2020, committed $1.5 billion in direct financing and $6 billion more in loan guarantees to pipeline operator TC Energy Corp. for the cross-border Keystone XL expansion project.

KXL was to take more Alberta oil across the United States and down to ports and refineries on the Gulf Coast in Texas.

Biden did so in January on his first day in office, saying more product from Alberta's oilsands does not mesh with his larger goal of combating climate change.

Alberta's 2021-22 budget, introduced by Toews Feb. 25, did not factor the $1.3 billion KXL expenditure into its bottom line.

Toews said it will be when final accounting is done for the current fiscal year, which ends March 31. Officials have said it was not accounted for because the government is still trying to recoup the money.

On Monday, Kenney told the house during question period that his government will sue the U.S. government to recoup the money under legacy rules tied to the old North American Free Trade Agreement, or NAFTA.

NAFTA has been replaced by the United States-Mexico-Canada agreement, but investors can still sue under NAFTA until the middle of 2023.

“The U.S. administration slapped this country in the face by vetoing that project. We’re going to sue them under NAFTA,” said Kenney.

Also Monday, Kenney told a news conference that capital commitment in the current fiscal year is $10 billion. He called it “the largest infrastructure budget to build things in the history of Alberta.”

Phillips challenged Kenney’s announcement. She noted that the capital spend under the NDP government three years ago was $9 billion, while this year’s capital spend will be $8.2 billion.

Toews said the government is including the $1.3 billion in KXL spending.

“That was an investment that actually did provide thousands of jobs,” said Toews.

Phillips replied: “So ... the largest capital plan in Alberta history includes money that is spent on people not building capital — because KXL was cancelled.”

The meeting was lit by sparks of tension between governing UCP committee members and the NDP.

Chair Dave Hanson twice rejected UCP motions to derail Phillips’ KXL questions on the grounds that they did not relate to the budget and were repetitive.

At one point, UCP member Shane Getson offered to explain to Phillips how pipeline construction works.

Hanson directed Getson to apologize, which he did.