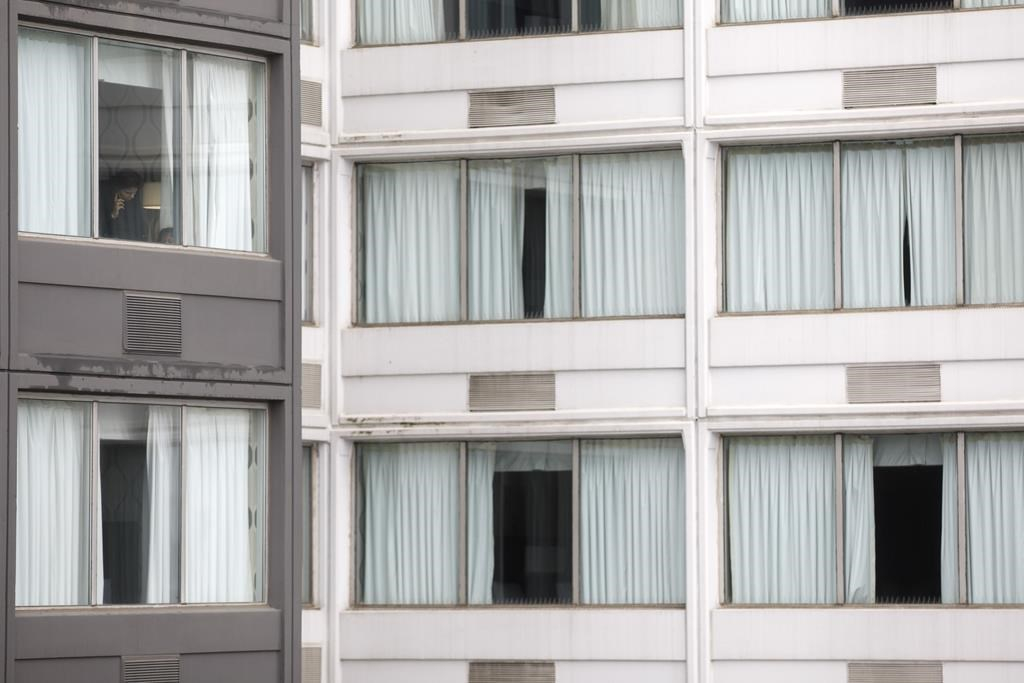 A guest is seen in a hotel window in Mississauga, Ont. by the Pearson International Airport on February 22, 2021 as new air travel rules come into effect in Canada. File photo by The Canadian Press/Cole Burston
Previous story
Next story

The Canadian Constitution Foundation has filed an application with Ontario's Superior Court of Justice along with five individuals, seeking an end to the policy. The application names the Attorney General of Canada as the defendant.

A government order that went into effect on Feb. 14 mandates that anyone entering Canada from abroad must stay in a federally approved hotel for the first three nights of a 14-day quarantine.

"The biggest issue is that we have a fundamental right to enter Canada and this is a limit on that right and it's not a justified limit," said Christine Van Geyn, litigation director for the CCF. "There are so many alternatives that would be less infringing on rights."

Travellers are expected to pay for their government-approved accommodations, which can cost hundreds of dollars per night. They may leave the hotels once a COVID-19 test taken at their point of entry comes back negative.

The Canadian Constitution Foundation argues in its legal application that hotel quarantine requirements are "overbroad, arbitrary and grossly disproportionate."

The applicants are seeking an injunction to suspend the order, but are also asking to have the law struck down for infringing upon the constitutional rights of liberty, freedom from unreasonable detention, and the right to be free of cruel and unusual punishment.

The CCF is also seeking damages of $10,000. Van Geyn said the request for nominal damages is to cover off the costs of the five individual applicants for their hotel stays at approximately $2,000 per person.

"The focus is not on the money, the focus is on the ability for them to exercise their fundamental rights," she said.

The CCF argues that the hotel policy detains people without COVID-19 symptoms who would be able to safely quarantine outside of government-approved accommodation at minimal or no expense.

A spokesperson for Health Canada and the Public Health Agency of Canada said that they were aware of the legal action and that the federal government intended to respond to the application.

When the order came into effect Van Geyn and the CCF asked for people impacted by the quarantine hotel policy to reach out to them. She said that the group received approximately 5,000 letters of support or from people directly effected by the policy.

Van Geyn said that the five individuals participating in the legal challenge were selected because they all had to travel out of Canada for compassionate reasons, in three cases attending to their parents in the final days of their lives.

She noted that Canada has an exemption to its quarantine policy for people entering the country for compassionate purposes, but not for residents who had to leave Canada for similar reasons.

"If you live in Florida and your mother breaks her hip and you need to come to Canada to help her ... you can apply for an exemption and be granted one," said Van Geyn. "But if the situation is reversed, if you live in Canada and your mother lives in Florida, you would still want to go and help her prepare for surgery and recover, but you are not eligible for an exemption when you return.

"It's strange to me that the government is concerned about these compassionate travellers but only when you're travelling in one direction."

By The Canadian Press | News | February 8th 2021
Coronavirus in Canada