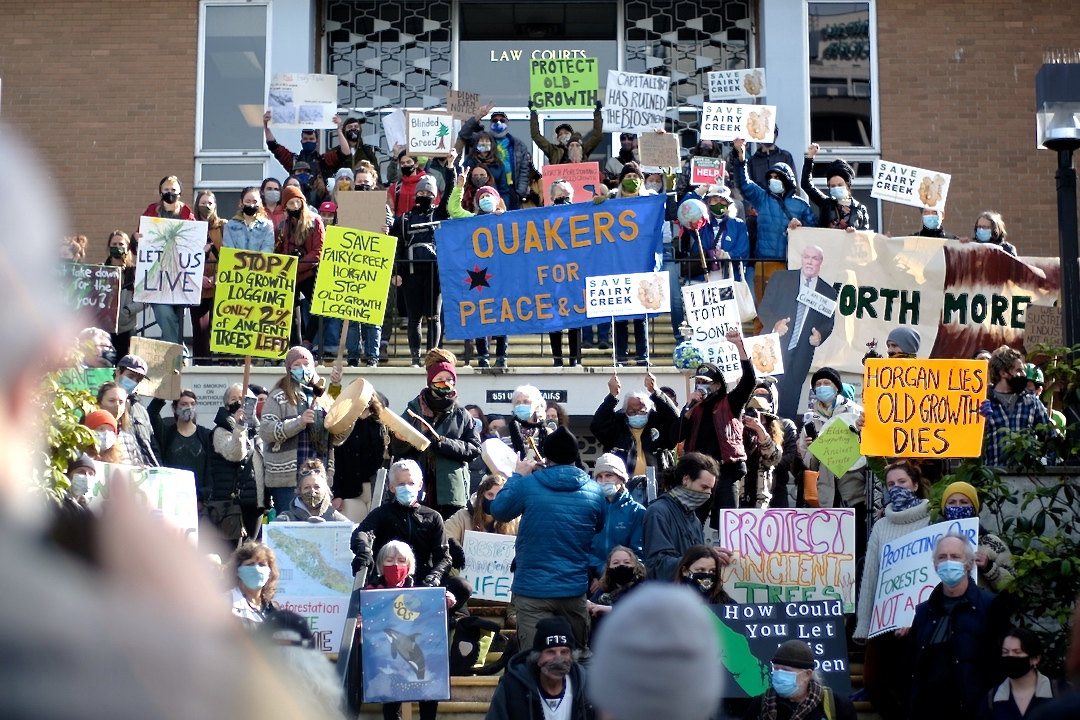 Protesters demonstrated in solidarity with the Fairy Creek blockade at the Victoria law courts on Thursday. Photo by Liam Morgan
Previous story
Next story

Fairy Creek blockade activists trying to protect some of the last stands of old-growth forest on southern Vancouver Island have won a three-week reprieve after a judge adjourned an injunction hearing on Thursday.

B.C. Supreme Court Justice Jennifer Power granted a request by the blockade’s legal team for more time to assemble materials necessary for a defence against the injunction.

Forestry company Teal-Jones had sought the injunction to remove the Fairy Creek blockades at various entry points to its Tree Farm Licence (TFL) 46 near the community of Port Renfrew until Sept. 4.

However, Power said it was in the interest of justice to allow the delay, so defendants could better prepare and the court could set aside more time to hear the matter.

Additionally, Power was unconvinced a short delay would be problematic given the blockade started in August 2020, but the forestry company did not apply for the injunction until Feb. 18, 2021.

“I am not persuaded that I should find urgency or prejudice to the extent that the plaintiff now alleges,” Power said.

“If, as the plaintiffs argued (that) there will be a prolonged civil disobedience campaign after a court order, it is, in my view, all the more important that any order that the court makes be made (based) on a full hearing.”

The blockade activists want to save pristine old-growth forest at the headwaters of Fairy Creek with yellow cedars thought to be 1,000 years old, as well as other remaining groves on near Camper Creek, Gordon River, and in the Upper Walbran Valley.

Pacheedaht First Nation elder Bill Jones, one of defendants named in the injunction application, says the Fairy Creek valley falls within the nation’s traditional territory and contains bathing pools with spiritual significance that are endangered by clear-cutting.

“I am not persuaded that I should find urgency or prejudice to the extent that the plaintiff now alleges,” B.C. Supreme Court Justice Jennifer Power said Thursday in granting the delay.

It was also in the public’s interest to adjourn the hearing, said defence lawyer Patrick Canning.

Demonstrators in solidarity with the Fairy Creek blockade gathered on the Victoria courthouse steps on Thursday, and in various other communities on Vancouver Island prior to the court decision.

Lawyers representing Teal-Cedar, a division of Teal-Jones, had argued that Power should grant the injunction immediately because a delay would endanger road building in the region necessary before logging could occur later in the spring and summer.

Any further delays due to the blockades would threaten timber harvesting and jobs at its mills, said the company’s lawyer Dean Dalke.

The elected council of the Pacheedaht Nation were also aware of and did not oppose the proposed logging activity in the region, Dalke said.

The request for an adjournment by the defence was to raise issues that wouldn’t, in fact, be a defence to an illegal blockade, he added.

Regardless of whether the defence arguments “would pass muster,” it was important to allot enough time to adequately hear them, Power said.

A two-day injunction hearing is now scheduled to start March 25.

Teal-Jones did not respond to a request for comment following the hearing decision before Canada’s National Observer’s publication deadline.