Kielburgers suggest they may not accept House committee summons, make new demands ahead of hearing 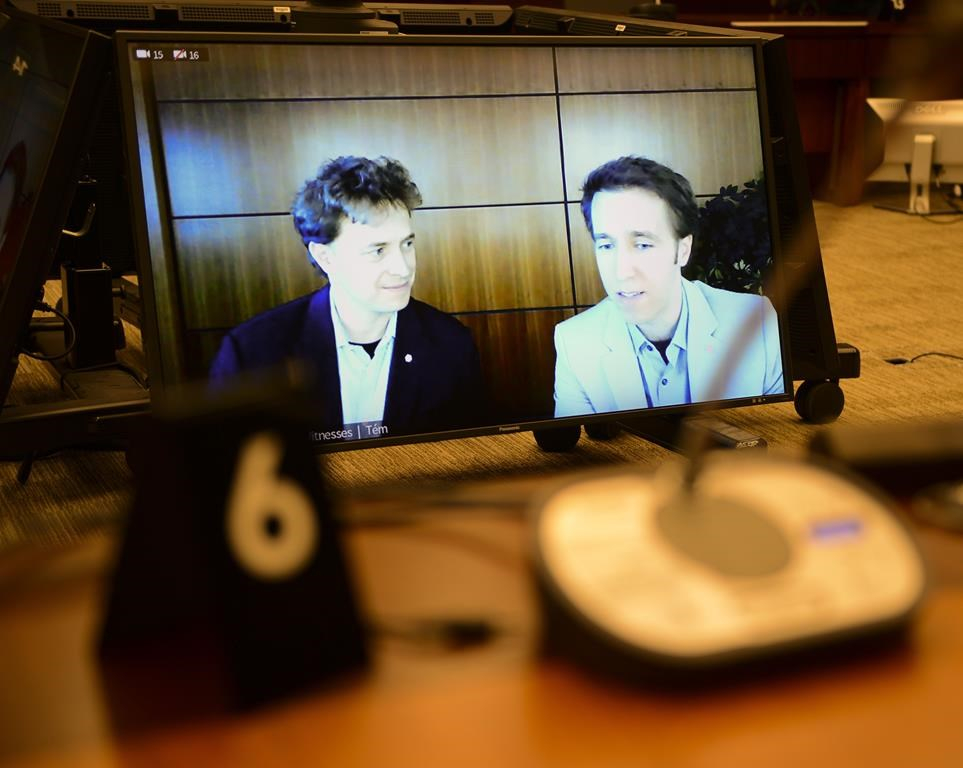 Marc Kielburger, screen left, and Craig Kielburger, screen right, appear as witnesses via videoconference during a House of Commons finance committee in the Wellington Building in Ottawa on Tuesday, July 28, 2020. THE CANADIAN PRESS/Sean Kilpatrick
Previous story
Next story

OTTAWA — Marc and Craig Kielburger's appearance before the federal ethics committee next week is once again in doubt after a fresh spat broke out between the WE Charity co-founders and the MPs who want to grill them about the organization.

The brothers suggested they might not accept a summons to appear at the committee Monday unless a list of conditions are met. The demands come after the pair accepted the summons issued unanimously by committee members earlier this week, which followed the Kielburgers' initial refusal to testify.

William McDowell, their lawyer, now says that police could draw on information gleaned in the meeting, even though it falls under parliamentary privilege.

"While it may be true, in a limited sense, that 'Parliamentary privilege ensures that anything said in Parliament cannot be used in any other proceeding,' you will appreciate that law enforcement agencies and others are free to use the information disclosed in committee hearings," McDowell wrote in a letter to Conservative committee chair Chris Warkentin.

NDP ethics critic Charlie Angus has asked the RCMP and the Canada Revenue Agency to investigate the Toronto-based organization's operations.

McDowell is demanding that lawyers be able to appear on camera, make an opening statement and intervene to object to questions put to the Kielburgers during testimony.

The demand comes after the ethics committee agreed to the brothers' request that their lawyers be present and to push back the hearing to Monday from Friday to give them more prep time.

"To be clear, it is not my intention to provide substantive answers to the questions, but rather to intervene as necessary to protect our clients' rights," McDowell said.

Angus said he expects the brothers to testify regardless of whether their latest demands are met, in accordance with parliamentary precedent.

Legal counsel for the Kielburgers is demanding lawyers be able to appear on camera, make an opening statement and intervene to object to questions put to the Kielburgers during testimony. #cdnpoli #WECharity

"I'm not really sure what's behind these theatrics from the Kielburger brothers. The issue is, there is an outstanding legal summons compelling them to testify. That's an extraordinary step that we've had to take in order to get answers," Angus said in an interview.

"There's almost no precedent in the history of Parliament for someone refusing a legal summons … and the heads of a Canadian charity doing that would be certainly dramatic."

In that situation, the case could go to the House of Commons, which could order witnesses to appear. Witnesses who still refuse could be declared guilty of contempt.

"My advice to them is just calm down, take a deep breath, show up and answer the questions and do the right thing," Angus said.

Both the Commons ethics committee and the procedure and House affairs committee have invited the Kielburger brothers to testify as part of their ongoing scrutiny of a federal agreement to have WE manage a now-cancelled student services grant program, despite the organization's close ties to Prime Minister Justin Trudeau and his family.

Ethics commissioner Mario Dion is investigating the involvement of Trudeau and former finance minister Bill Morneau, who also has family ties to WE, in awarding the $43.5-million contract. Both have apologized for not recusing themselves from the decision.

The RCMP declined to confirm whether a probe is underway.

"The RCMP continues to examine this matter carefully with all available information and will take appropriate actions as required," the police force said in an email.

Guy Giorno, a legal adviser to WE, questioned the notion that parliamentary committees are the appropriate forum for investigating private organizations.

"These things were never actually meant to be used in some kind of a political skirmish with people outside government," he said in an interview.

“People alleged to have done things are answerable to the law and the legal process and due process, not a bunch of partisan politicians."

Giorno said the Kielburgers were willing to appear before the ethics committee until Angus tweeted on Feb. 28 that he had written to the national revenue minister, who oversees the Canada Revenue Agency, as well as the RCMP to request an investigation regarding WE's fundraising practices.

"That changed the stakes for the organization incredibly, because of the risk," Giorno said. "They could be caught by having proceedings."

"These are long-standing parliamentary conventions protected by the Constitution going back 170 years: the right to draw witnesses, the right to compel testimony, and the right of parliamentarians to ask questions," Angus said. "It's pretty straightforward."

MPs to summon Kielburger brothers to testify at ethics committee

Unanswered questions with WE go beyond politics