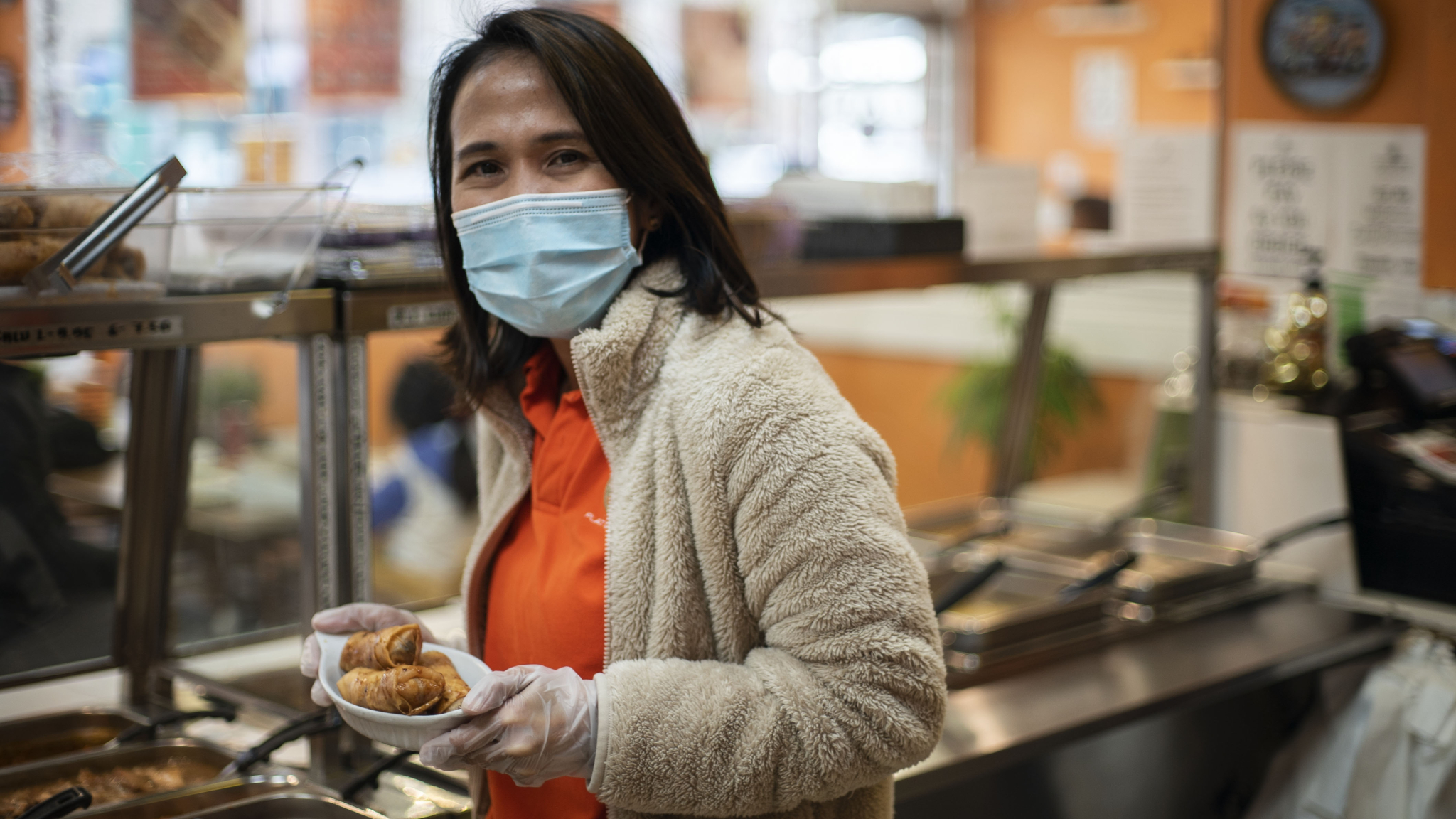 The condominium development Bennet Miemban-Ganata knew would eventually displace her Filipino restaurant seemed a distant threat until she heard the noise of a development application sign going up.

Miemban-Ganata owns Plato Filipino, a restaurant nestled between four other Filipino and Chinese eateries and food stores, all set for demolition if a proposed zoning application goes through near the Joyce Skytrain station in Vancouver. The new zoning would allow for a 32-storey mixed-use property, with commercial residences on the bottom floor, a new branch of the Vancouver Public Library on the second, and residences above.

“We’d been told already that the owner was going to sell this (site) for a highrise building. We asked when it was going to be, and they said, ‘Not soon,’ so we were kind of surprised when this (sign) was here,” said Miemban-Ganata, who rents her restaurant space. “And then suddenly, it’s like that.”

Walking into Plato Filipino, you see a full hot bar of warm dishes like dinuguan (pork blood stew) and kaldereta (an orange-y meat and vegetable stew). Miemban-Ganata says right now, those are the most popular plates, with commuters grabbing takeout on their way to work. Although her business has only been around for five years, the block has long been a destination for Filipino food and groceries that are hard to come by elsewhere in the city.

Not only because they might lose easy access to a favourite dish. The block offers a sense of belonging specifically for new immigrants. That can make the move to a new country — an often alienating experience — more manageable. It helped Miemban-Ganata adapt to her new home after moving to B.C. 10 years ago.

If the development does go through, Miemban-Ganata hopes she and her neighbours will be able to rent in the new space for similarly affordable rates.

“Us Filipinos flock together. They live in this place because it’s known to be home to us ... it’s a place that we can call home for eating,” she said. “It’s a place where you see friends coming together.”

That sense of togetherness was especially felt by Miemban-Ganata Tuesday, when Renfrew-Collingwood Food Justice, a non-profit in the area, spent a few hours helping community members provide feedback to the city and understand the planned development in both English and Tagalog. People were stopping by a table set up out front to express their support for the businesses on colourful sticky notes.

“Most of our customers are asking, 'How about them? Where will they buy their food?'” says Bennet Miemban-Ganata, owner of the Plato Filipino restaurant near the Joyce Skytrain station.

Although Miemban-Ganata knows how important the block is to the neighbourhood, she said she was moved by the words of encouragement she received.

“I was so emotional ... I really feel so grateful that my fellow countrymen are supporting us,” she said. “We didn’t ask for this. It’s so surprising that they’re coming along to support us.”

Alexine Sanchez is among the supporters. She comes all the way from UBC’s campus to get authentic Filipino food that reminds her of home. She’s a member of Sulong UBC, a Filipino-Canadian student group, as well as a translator for c19help.ca, which translates COVID-19 information into Cantonese, Mandarin, Vietnamese and Tagalog.

“It’s not just going to affect this, it’s going to be a spillover to other areas. There's this thing about redevelopment around Vancouver that if one part of the neighbourhood gets developed, it's going to set a precedent for other areas,” she said. "So, that's probably one of the big concerns about these redevelopments.”

Sanchez says a development like this going through wouldn’t just be erasure, but a direct contradiction of the city’s commitment to diversity.

“A lot of folks who grew up here connect to the heritage, by our heritage, through food ... and I think that’s very valid. And I think a lot of folks here, especially second generation ... have that experience where culture equates to food,” she said.

“So if we take away ... these places in our neighbourhood, that says something about our community and our society. What we prioritize.”

Sliced Mango Collective, a Filipinx-Canadian youth organization focused on exploring community and culture through zines, art, and events, says there are at least three city plans that go against the development: Culture|Shift, an arts and culture framework to craft "‘a more accurate and inclusive representation of Vancouver"; the Healthy City Strategy, which outlines goals relating to health and well-being; and the Vancouver Food Strategy which aims to "create a just and sustainable food system for the city."

“It feels like lip service from the city to say that they want to create a diverse and inclusive city and then at the same time, be OK with a redevelopment that will displace these very significant cultural food assets to the Filipino and Chinese community living at Joyce-Collingwood,” said Anne Claire, co-founder of Sliced Mango Collective.

Claire said the response from the collective - which includes a toolkit to help the community understand the specifics of the development and how to submit feedback - came together quickly.

Many people in the area weren’t aware of the development application at all, she added.

A group chat message last week from one of the organization’s members giving them a heads up on the development was an alarm bell for Sliced Mango. Claire, whose earliest memories are of the Joyce-Collingwood neighbourhood after moving from the Philippines at age two, said they made it their goal to tell the community what was going on.

From there, they spoke to the businesses affected to put together a list of requests to the City of Vancouver, which include: extending the consultation period; ensuring all affected businesses the first right to return to the new building spaces together at their current rental rate; and the implementation of "a social enterprise pilot program like that approved for the Downtown Eastside to be established in Renfrew-Collingwood to support community-serving retail.”

Claire points out that as of now, there’s only two available retail spaces. She also says the city’s new Vancouver Plan, which outlines goals for the municipality, directly contradicts the rezoning application.

“You don’t need to create a culturally vibrant neighbourhood at Joyce-Collingwood. It’s already there,” she said, about Goal 7: Create Complete, Connected and Culturally Vibrant Neighbourhoods.

“It feels like (the city) is ignoring the fact that we've already created a community for ourselves there, and it feels that our community hasn't been heard, hasn't been seen and hasn't been understood.”

The city of Vancouver said they’ve done their standard community outreach for the development near Joyce Station, which includes: an online project webpage with 10 translated languages; a rezoning sign and a postcard sending them to the project webpage.

They said they’ve also completed additional outreach: a virtual open house allowing questions directly to city staff and an extension on the open house from Feb. 22 to March 28. The city said they’re currently working on translating the outreach postcard into Tagalog.

“The City is also looking at the impact of redevelopment on local owner-operated small businesses as part of the Vancouver Plan quick start actions,” said the city in a statement.

“Supports for commercial tenants, including options to reduce the impacts of commercial redevelopment, have been identified, and City staff will continue working with community stakeholders, the public and key partners to refine and expand this approach.”

In a subsequent statement, the city said if the development is approved, they'll consider the position of the affected businesses.

"Culture strategy, and the Strategies’ goals are to ensure access to healthy, affordable, and culturally appropriate foods, cultivate connections, and prioritize intangible cultural heritage and promote cultural redress," they said.

"The City recognizes that the loss of these important cultural food assets would be a significant loss to the community and, after hearing the community feedback, City staff will be working with the project applicant on ways to address displacement and assist businesses displaced by this redevelopment if approved."

For now, Miemban-Ganata and Plato Filipino are holding tight and hoping for the best.

“I get so emotional because we’re not really earning much, but in the five years that I’ve been here, I’ve come to love what we’re doing. I ... love seeing people coming over, grabbing their food so quick, and I know their names already,” she said.

“We know what they want when they step in ... it’s what makes the community connect. Anyone that enters this business would feel like you’re part of us.”

This article was updated on Thursday, March 11 at 9:30 a.m. to include additional comments from the City of Vancouver

This is a tough one with two

This is a tough one with two relevant sides to the story.

On the one hand, high-density development in this location has been ongoing for decades. The site is extremely close to a high-capacity rapid transit station that was built in 1986. New towers and townhouses have been appearing almost every year since then and are no surprise. Displacement of existing older buildings is inevitable, and this community has been fairly fortunate that the development so far has been largely located on formerly industrial or vacant land on this old railway and hydro corridor.

On the other hand, the Filipino community is perfectly justified to fear displacement, especially if the new rents are unaffordable. The businesses currently exist in a one-storey cheap-rent block of older buildings of unknown upkeep standards that are not part of the Joyce Plan. It appears not enough effort has been made by the city or developer to accommodate their needs. This is the unfortunate story in every growing city.

Then there is the overriding issue of land use in Vancouver. The city ran out of greenfield land long ago. The tower and podium development that Vancouver is famous for is concentrated mainly on industrial or previously-zoned dense areas that occupy a very small part of Vancouver’s land base. The numbers are telling: 80% of all residential land is occupied by just 30% of all residential development, namely the now obsolete detached house on a large lot. How is this not the very definition of sprawl? How is creating an artificial land supply shortage through exclusionary zoning not a contributor to one of the continent’s most acute housing affordability crises? How is housing and commercial diversity not addressed through building the myriad types of housing and buildings found in the vast gulf between the tower and the detached house? Where is the human -scaled local infill development that respects local character while also increasing the supply of housing with using an excessive amount of land?

The gulf is illustrated in the Joyce community. Not more than a 5-minute walk in two directions from the station and its associated new towers are hundreds of large lots with detached houses and single-use zoning. Tower and townhouse podium walls suddenly plunge to one-storey houses. Single family houses (some albeit with basement suites and lane houses) take up hundreds of metres of frontage on Joyce Street where continuous sidewalk retail should be situated under mid and low-rise apartments and rowhouses, not just along every block on Vancouver’s numerous arterials, but turning the corners onto the side streets too. More local housing units support more local businesses, so going anti-development in a transit-rich neighbourhood is as counterproductive to existing communities as is displacement without development approvals taking responsibility for displaced citizens and their support businesses.

To sum up, protecting single-use sprawl under zoning regs is as damaging to life in the city as is displacing existing communities with new development, notably where transit-orientation is justified. Ideally, there has to be opportunity for everyone to stay in their own community while also accommodating new development.