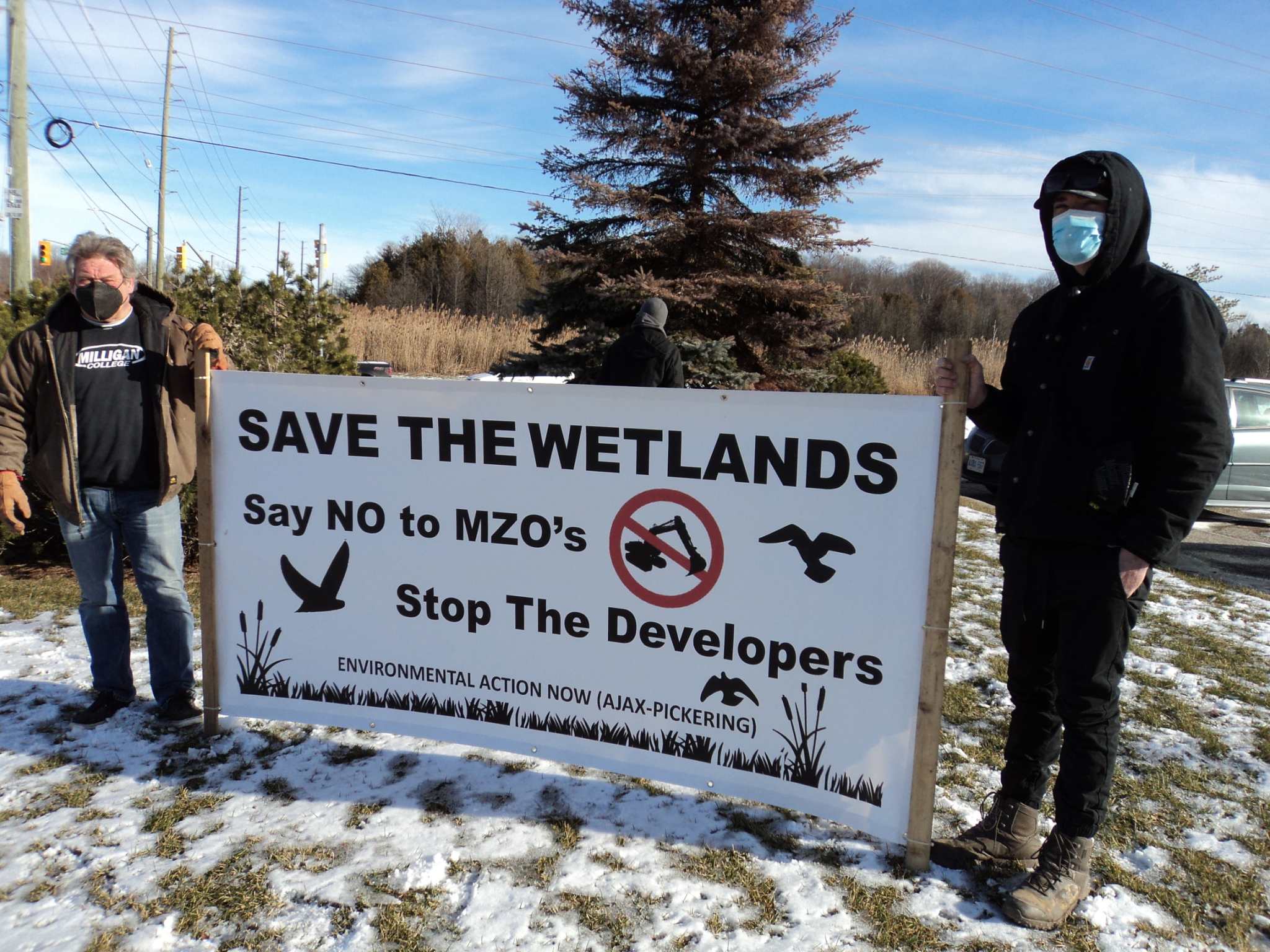 Protesters blockade the site of Durham Live, a development in Pickering, Ont., that received an MZO last year, on Jan. 9, 2021. Construction would involve paving over a protected wetland. Photo courtesy of John Oliver
Previous story
Next story

The Ford government’s plans to fast-track a warehouse on a protected Ontario wetland were left in limbo Friday night after Amazon confirmed it’s no longer considering the site.

After the company’s announcement, the Ontario government said it was willing to amend or revoke a special directive aimed at expediting the Pickering, Ont., development — if local officials were to ask for it. But even as Pickering’s mayor called for the project to be paused Friday evening, the developers also received a key conditional permit that could allow it to move forward.

“I think there’s a big circle of finger-pointing at the political level,” Tim Gray, the executive director of the green non-profit Environmental Defence, said.

“There’s been so much heat on this issue.”

The Ford government issued a special order last year to fast-track the contentious warehouse, connected to the Durham Live project, located in the outer suburbs east of Toronto. It’s been the centre of building backlash ever since, facing opposition from local activists, Williams Treaties First Nations, the neighbouring Town of Ajax and the local conservation authority.

Municipal Affairs Minister Steve Clark’s offer to undo the directive ⁠— called a ministerial zoning order, or MZO ⁠— represents a remarkable shift for the Ford government, which has changed provincial rules to clear the way for Durham Live and was seeking to do so again with a bill introduced earlier this month.

“Our government has been clear that every MZO issued on non-provincial land has been at the request of the local municipality — this includes the lands in Pickering,” Adam Wilson, a spokesperson for Municipal Affairs Minister Clark, said in a statement.

“As always, when it comes to MZOs on non-provincial land, it is the municipalities who are in the driver’s seat.”

The City of Pickering didn’t immediately answer when asked if it planned to request Clark revoke or alter the MZO. But in a statement, Mayor Dave Ryan said he was “truly disappointed,” and that “reflection and consultation on the best path forward” is needed.

“The appropriate next step is to pause any immediate disruption to the wetlands,” Ryan said in the statement.

The developers behind the Durham Live project in Pickering, Ont. received a key permit Friday night. But the project's fate was also up in the air after prospective tenant Amazon announced it was no longer interested. #onpoli

The announcements from Amazon, Clark and Ryan do not necessarily stop the warehouse from being built. The MZO remained in place going into the weekend, and the project also received a conditional permit from the Toronto and Region Conservation Authority (TRCA) Friday night.

But Clark’s announcement effectively places the ball in Pickering’s court, giving local officials the final say on whether the embattled warehouse project still makes sense if its prospective tenant is no longer interested.

Though Amazon hadn’t signed a lease for the Durham Live warehouse ⁠— which is also known as Project Lonestar ⁠— it had been considering that location for a new fulfilment centre. The company is still looking at other sites in the area, including a competing bid less than a kilometre away in neighbouring Ajax.

“We were always considering multiple sites for our expansion and we take environmental issues very seriously,” Amazon Canada spokesperson Dave Bauer said in an email Friday.

News of Amazon’s interest and subsequent withdrawal was first reported by CBC News.

Durham Live is a sprawling casino complex, proposed by a billionaire family that has donated nearly $20,000 to the Progressive Conservatives since they formed government in 2018. (The government and the company have denied the donations factored into the province’s support for the project.)

The warehouse component of Durham Live, which is at the centre of the controversy over the project, is planned to go on top of a wetland that has been designated “provincially significant.”

That title means it’s among the most valuable wetlands in the province, and development there is usually forbidden under provincial policy. Such sites usually have rich biodiversity and can naturally help control floods.

In spite of that prohibition, the Ford government issued an MZO on Oct. 30 to fast-track the warehouse.

The TRCA has argued against the project and initially signalled it would not sign off. Triple Group has offered to compensate for the loss of the wetland by building another one elsewhere and giving the TRCA $3.5 million. But the conservation authority called that solution “inadequate,” saying the new wetland wouldn’t be large enough and the ecological value of the site can’t be replaced.

However, the Ford government changed the law in December to take away conservation authorities’ power to refuse developments that have received MZOs. The Ministry of Natural Resources used that mechanism earlier this month to issue a regulation ordering the TRCA to give Triple Group permission, with a deadline of Friday night.

The government didn’t revoke that regulation Friday even as questions swirled about the fate of the warehouse proposal. So the TRCA granted the the company permission to get a permit, as long as it abides by a series of conditions aimed at minimizing the environmental impact.

Triple Group cannot move ahead with filling in the wetland until the conditions are met meaning work likely can’t begin right away even if the project is still on the table.

“(The) TRCA is unclear on whether this agreement will ever be executed, however, TRCA has fulfilled its provincially compelled obligation under duress,” the conservation authority said in a statement Friday night.

People powered change works. Let’s keep up the fight to save our wetlands and the people and places we love. #onpoli #SaveDontPave pic.twitter.com/yGODJNuQpV

Opposition critics hailed the news Friday as a victory for community activists, who have been holding regular demonstrations to protest Durham Live for months. But they also called on the provincial government to pull the MZO and halt the development entirely.

“It is vital that we preserve our wetlands, which play such an important role in protecting us from flooding, cleaning our water, providing habitat to wildlife and protecting the Great Lakes.”

“The community has spoken loudly and clearly,” she said. “They don’t ever want to see Duffins Creek left in the hands of developers, and we are proud to continue to stand alongside them until the Ford government finally takes action to put a stop to these plans once and for all.”

“Ontario is a big enough province that we don’t need to prioritize development over the protection of our natural environment,” she said in a statement.

Schreiner also called on the Progressive Conservatives Friday to undo not just the MZO, but also the other changes the government has made to expand MZO powers and move Durham Live forward.

“If the premier cares about listening to the voices of Ontarians, he would fully revoke the MZO and commit to protecting the wetlands,” Schreiner said.

“He should also reverse the extreme legislative measures the government has taken to facilitate the destruction of wetlands, farmland and greenspace. Greens will continue to bring community voices to Queen’s Park to save the Lower Duffins Creek wetland.”

Wilson said the government has no plans to backtrack on those measures.

“Recent amendments to MZOs were introduced to ensure that priority projects do not face unnecessary delays, and this remains the government’s position,” he said.

Meanwhile, a coalition of environmental groups have filed a court challenge of the province’s decision to issue an MZO, and have asked a judge for a stay to development at the site until that case is decided.

A hearing about the stay will take place Monday.

This article was updated to include comments from Pickering Mayor Dave Ryan and Ontario Green Party Leader Mike Schreiner.

This story was updated to include details about the permit issued by the TRCA and reaction from opposition parties.

"Durham Live is a sprawling

"Durham Live is a sprawling casino complex, proposed by a billionaire family that has donated nearly $20,000 to the Progressive Conservatives since they formed government in 2018. (The government and the company have denied the donations factored into the province’s support for the project.)"
Right. Because they donated that amount to each of the other parties, too.
Isn't there case law that you can't change a law retroactively to make legal something you've already done illegally?