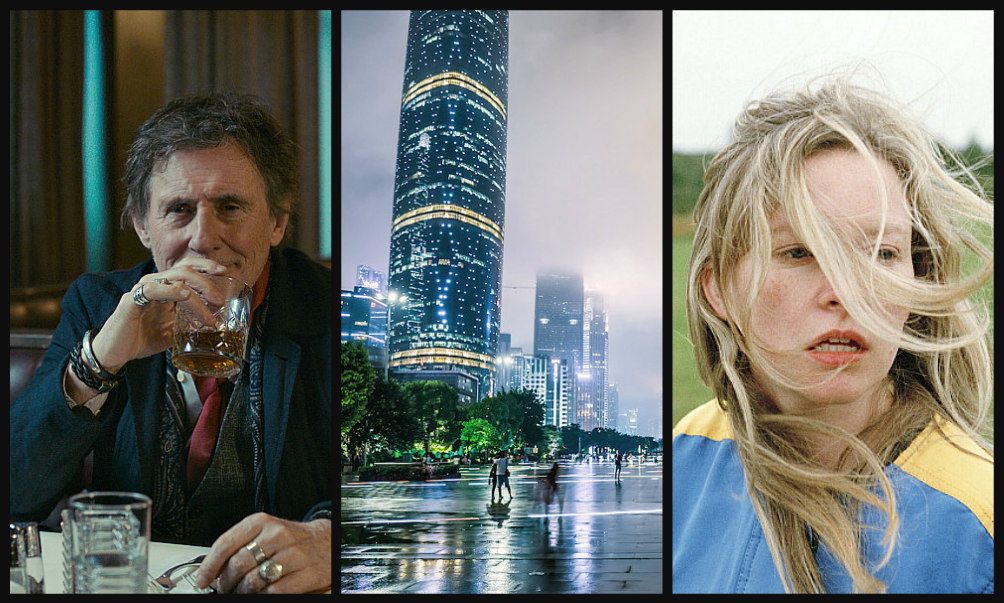 On Monday, we finally get the nominations for the biggest movie awards: The Oscars. There are always surprises, but there could be lots this year. Everything has been delayed and there are more contenders than ever before. There are also more voters, and in some categories, new rules. It’ll be interesting. Nomadland is a front-runner, but rumoured to be slipping. The Trial of the Chicago 7 has been rising, and News of the World is high in many attempts at predicting that I’ve seen.

Better to just wait … and see what’s new this week.

Death of a Ladies’ Man: 3 stars

Bobbi Jo Under the Influence: 3

DEATH OF A LADIES’ MAN: I don’t fully see the connections here to Leonard Cohen’s music, but seven of his songs are heard (among others) and they provide a moody soundtrack to a surrealistic story. It’s told with great imagination by writer-director Matthew Bissonnette, who filmed it in Montreal, Ireland, and a bit in Ontario. Gabriel Byrne plays his lead character, a professor teaching poetry at McGill University who is suddenly forced to reconsider what he has done with his life because it’s about to end. He’s diagnosed with a brain tumour. He’s sorry he neglected his now-adult children, and allowed work, drinking and carousing to create “a broken family.” He decides to reflect by finally writing that novel he’s been intending, based on his own life.

He travels to Ireland to connect with his heritage. So far, quite probable. The twist comes with hallucinations. He has drinks with Frankenstein’s monster, walks beside death (wearing that typical black robe), and sees his own father (Brian Gleeson). He lost him long ago, was deeply affected by that and now gets to ask his ghost: “What’s dying like?” He has several chats with him and gets the observation that “life is short … but so, so beautiful.” There’s more. He charms (and more) a grocery clerk (a woman from Montreal played by Jessica Paré) and is threatened by her ex-boyfriend. The atmosphere of melancholy and regret, more than the story details, is key. This one is strange, but engrossing. (Now available on the Apple TV app, iTunes and other VOD platforms.) 3 out of 5

CAPITAL IN THE 21st CENTURY: This film most interests me at this year’s KDocs festival because I haven’t been able to see it until now. It’s not the only one I want to catch at the annual showcase of social justice films organized by Kwantlen University and streaming from VIFFConnect. There are others: And Then They Came For Us, for instance, about the internment of Japanese-North Americans back in the 1940s. George Takei, ex-Star Trek actor, now human rights activist, will be speaking in an added presentation. See here for more on that and other films, including The New Corporation, named best B.C. documentary by local critics, and The Great Green Wall, which I praised last summer for explaining an African environmental project.

Capital in the 21st lets Thomas Piketty himself, the author of the bestselling book, explain what he thinks has gone wrong with modern economies. Not just him, but a prominent lineup including Nobel Prize winner Joseph Stiglitz, attack the growing inequality while the financial services industry has become huge. We hear about it quite often, and these people explain how it came to be. They go way back to feudalism in Europe, to people immigrating to the U.S. in the 18th century, through war and depression and to the collapse of the U.S.S.R. That proved to many that free market capitalism was best and led to Reagan, Thatcher and others promising to make their countries great again. Trump is heard in one bit from a speech. Among the startling statistics cited is this: Two-thirds of the population is now on track to be poorer than their parents. It’s a must-see. Piketty is a “rock star” economist and the film illustrates his ideas with clips from the news and movies. Basil Rathbone and Jane Austen come in handy. (Streaming until March 21 from VIFFConnect, $5 a film or specials for the whole festival.) 4½ out of 5

ANNE AT 13,000 FT: If you’re one of those movie fans who think Canadian films are dull, you must check this out. It’s exhilarating, scary, intense, and more. Toronto critics just named it the best Canadian film of the year. It was to open about a year ago, but COVID shut the theatres down. It’s been streaming from the Cinematheque for a week now. Also note that it has been trumpeted (by POV Magazine and others) as a herald of a new wave of Canadian filmmaking (centred in Toronto). Making do and achieving a lot with limited resources is the trait that gets their praise.

Anne is a daycare worker suffering some kind of growing breakdown. She’s restless and plays loose with the usual procedures at work. That gets her into noisy conflicts with her supervisor. “She’s always picking on me. Always correcting me,” she complains. Other events, too, like bringing her new boyfriend unannounced to a dinner at her mother’s place, show that reality is slipping out of her grasp. When her best friend holds a bachelorette party that includes skydiving, she relishes the novelty and the danger. Deragh Campbell is magnetic playing this character, making all her transgressions and quirks entirely believable and never turning off our interest. We’re fascinated to see what’s next right to a very intense ending. The film is very-well written and directed by Kazik Radwanski, who is tabbed as the head of this new wave. (Cinematheque.ca streaming.) 4 out of 5

OWN THE ROOM: We’ve had a couple of films in the last year about science competitions. They both followed worthy candidates to the contest, told us about their preparations and showed the results. Here’s the same format with candidates for a Global Student Entrepreneur Award. Makes sense; the film is produced for National Geographic by Shopify, the enabler of online commerce headquartered in Ottawa. That company is all about encouraging entrepreneurs.

The film visits five competitors, and all I’ll say is that they lucked out with their choices. They’re from five countries. A youth from Nepal has a celebration kit, a New Yorker, originally from Venezuela, has a replacement for chemical products like nylon, a Puerto Rican has an app for deaf people, a Greek has an app to interpret baby cries, and a Kenyan has a student housing registry. We see them win nationally and proceed to Macau for the internationals. The enthusiasm is infectious (“I did something good in my life”), and there’s drama when one is deported because he didn’t bring enough money. Watch him trying to get there anyway in this film that’ll get you rooting for innovation and optimism. (Disney+.) 3 out of 5

COME TRUE: If you can take a very tense film that moves with real momentum and delivers chills about sleep problems, you’ve come to the right place. This is not about insomnia, which is apparently a growing problem during COVID-19. This is about dreams, a staple of creepy movies. There are entities down dark halls, bodies hanging from the ceiling, and one particular being with glowing eyes, who is said to be universal in the dreams of all cultures on Earth. That’s the theory anyway of a sleep researcher and his staff in a lab where a young woman, played by Vancouver’s Julia Sarah Stone, arrives for tests. She thinks she might get help with her own sleep problems, and some money, too, but gets the scare of her life instead.

There’s a creepy mood well-conjured up by writer-director Anthony Scott Burns, who filmed it in Alberta. It feels like a dream. It moves like one, not logically, unnerving like a trance. Julia’s character asks, but isn’t told anything about the tests, the fact that she’s monitored all night and what the researchers are looking for. One does break the rules and tells her one thing she shouldn’t know: The lab has a computer program that can read her brain waves and visualize what she sees in her dreams. Sounds far-fetched, but it does propel the story to a wild and startling ending. (Video on demand at Telus, iTunes, Cineplex Store, Shaw and others.) 3½ out of 5

BOBBI JO UNDER THE INFLUENCE: Think of this as a Canadian's success story. The producer, Donna Jones, grew up on Vancouver Island, lived in Richmond, moved to Los Angeles, married Brent Jones, the writer-director, worked mostly on commercials, and later moved to Kansas City, his hometown. There they met a local firebrand named Bobbi Jo Reed and made this film about (and with) her. She was, as the poster puts it, an “addict, prostitute, sinner, saint.” For much of the first half of the film, she tells horrific stories to an audience of addicts. Violent control by pimps, multiple rapes, and lots of whiskey to cheer herself up. “I lost hope.”

She fought back. With a small inheritance, she bought a house to shelter people like her and found that with her experience, she knew their problems, and they listened to her. She now has 14 houses and a couple of apartment buildings and still has to turn away 100 people a week. That's a sign of how dire life is for addicts, the poor and used people in inner cities. And it speaks to her energy. “Bobby Jo does not stop,” somebody says. Helping people enabled her to fight off addiction and rise out of depression, she says. Also, quite a bit of Christianity, although the film doesn’t push that too much. It doesn’t explain the finances, either. It lets several staffers, residents and visitors focus on her optimism in this stirring film. (On major platforms, including iTunes, Amazon, and Google Play.) 3 out of 5

BOSS LEVEL: Here’s your action hit for this week, if you’re a fan of that sort of movie. And there’s a new wrinkle taken from films like Groundhog Day: A time loop that won’t end. Our main character dies and wakes up the next morning and goes through the whole thing again. And every day thereafter. It has been called a satirical poke at action films, showing how they keep giving us the same thing over and over. I think it’s a device to cram as much action into one film as possible. Just keep doing it. You don’t have to explain.

Frank Grillo, known from TV, plays a retired special forces guy who revives after his daily murder and gradually learns of a secret government project causing it. Mel Gibson is behind it playing a colonel, also retired it seems, and Naomi Watts is an ex-flame using Frank for something or other that I never quite caught. She runs the machine, put him in the time loop and her assistant (B.C. guy Will Sasso) sends trained killers after him. Repeatedly. He narrates his own story with a cynical ennui. It’s like a video game: Improbable, repetitive, but mindlessly entertaining anyway. (Now available digitally and VOD.) 2½ out of 5