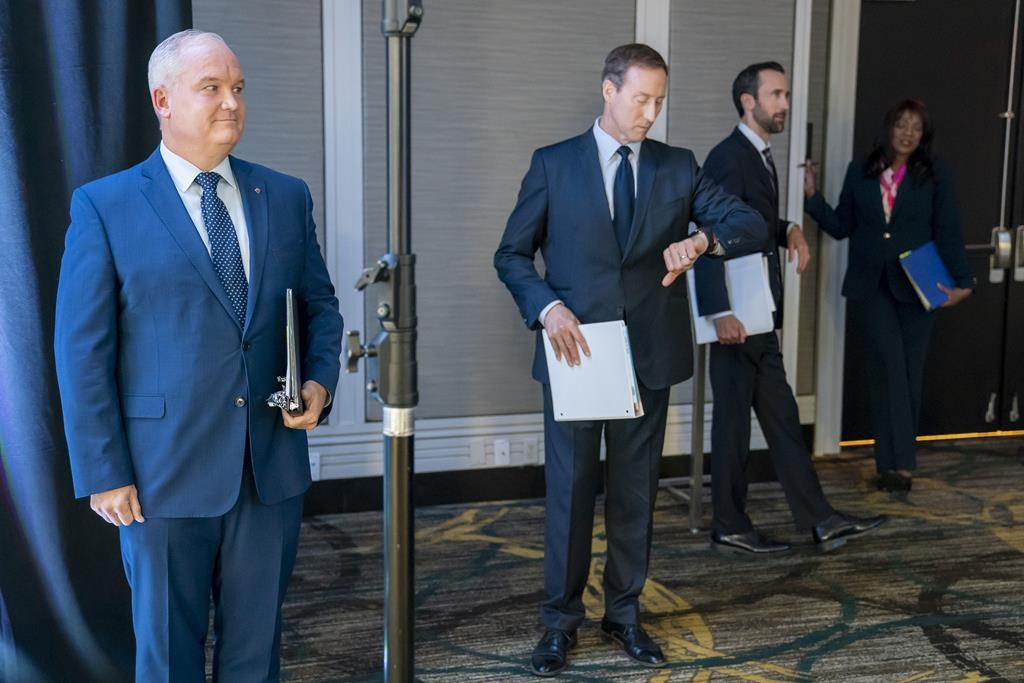 MacKay cited work and family as the reason for his absence.

"I am focused on my young family and the practice of law and work with Deloitte, which is non-partisan," he said in a statement to The Canadian Press.

The decision to sit out the event follows a bruising loss to Erin O'Toole in last year's leadership race, a contest which ended with obvious gulfs between various party factions that some say have yet to be bridged — and which may be exposed further at this week's event.

MacKay and O'Toole have barely spoken since then.

Whether MacKay's presence at the convention could have served as a unifying force or a distraction is unclear at any rate.

Absent being handed a high-profile speaking role, he would have been just one of thousands of people registered and logged-on via video conference beginning this Thursday, their involvement limited to clicking the "raise hand" function if they want to talk.

Despite the pandemic-induced format, O'Toole has pledged the event will get the party focused.

"You will see coming out of the largest political convention in Canadian history a Conservative party united, a Conservative Party ready to lead," he said recently.

While MacKay's absence may or may not be felt, MP Derek Sloan, another former leadership contender who also isn't officially attending, has made it clear his presence will still be obvious.

Sloan was booted from the party's caucus over what O'Toole claimed was a pattern of destructive behaviour, linked to explosive comments Sloan made during the leadership race.

The final straw was purported to be a donation Sloan's leadership campaign took from a man with known ties to white nationalism.

But Sloan was also actively organizing to marshal delegates who would support social conservative policies at the convention, including going into other MPs ridings trying to mobilize support. That was seen as undermining his fellow MPs' own control, resulting in pressure building from within for O'Toole to act.

He did, infuriating the grassroots who had backed Sloan but also even moderate party members who felt the issue was badly handled.

For his part, Sloan vowed not to go quietly. He continued to rustle up supporters to attend the convention, not just to back issues including anti-abortion policies, but also efforts to give riding associations more power over the party's direction and finances, and to elect their own slate of candidates to the party's powerful national council.

Since he was booted from the party, Sloan can't attend as a delegate. But he told The Canadian Press his wife is registered as one, as are thousands of his supporters, and he'll be watching over her shoulder.

"My shadow will loom large," Sloan said of the event.

While MacKay is on the sidelines — he also won't run as a candidate in the next election — and Sloan a persona non grata, O'Toole has taken an entirely different approach to the fourth leadership candidate, Leslyn Lewis.

Even as he turfed MacKay supporters from the opposition front benches after the leadership race, O'Toole moved to bring Lewis' backers on side. He hired her campaign manager as his deputy chief of staff.

Lewis was also handed a relatively safe seat in Ontario to run in come the next election.

And, she'll headline the convention this week as the co-host.

Lewis has remained silent on the fracas around Sloan and the challenges social conservative groups are having getting their issues on the table.

That's something Sloan called disappointing given her stated commitment to the grassroots during the leadership race and her own social conservative views.

But he suggested Lewis needs O'Toole to get elected, just as much as O'Toole needs her to remain in his own job as leader.

Sloan and Lewis' supporters effectively handed O'Toole his win, in part to help defeat the more moderate MacKay. O'Toole had directly courted that wing of the party on the basis that, unlike MacKay, he'd always respect and listen to them.

"He can ostracize me because he can say it wasn't because of my beliefs, because he supports her," Sloan said.

What O'Toole wants, however, is for everyone to unite behind him, a pitch the party made directly to the grassroots in a fundraising email this week with a simple request: "asking you to back Erin."