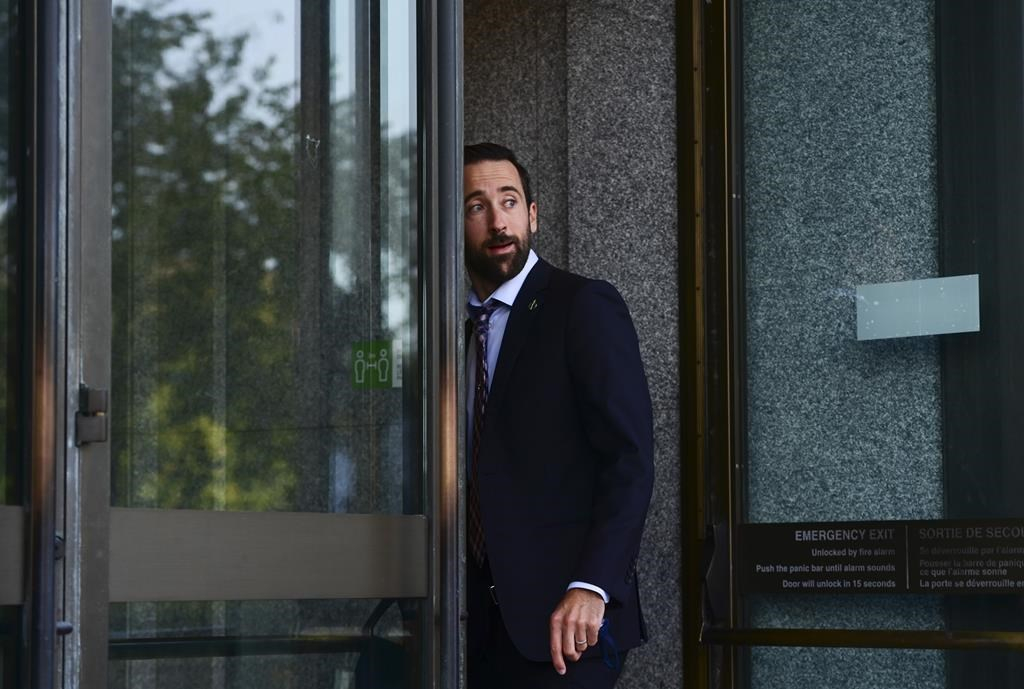 MP Derek Sloan arrives to a meeting in Ottawa on Sept. 22, 2020. Sloan said he will now sit as an Independent and will continue to fight for conservatives voices. Sean Kilpatrick/The Canadian Press
Previous story

OTTAWA — Controversial MP Derek Sloan was kicked out of the Conservative caucus Wednesday, a move party leader Erin O'Toole said was due to a "pattern of destructive behaviour" that had become a distraction.

O'Toole's acknowledgment that Sloan's dismissal was not solely over a donation he'd taken from a white nationalist came after hours of heated debate within caucus that saw MPs castigate both Sloan for his record and O'Toole for how he'd handled the issue.

Sloan said he will now sit as an Independent and will continue to fight for conservatives voices.

O'Toole had formally triggered the effort to boot Sloan after revelations Monday that Sloan accepted a donation last year from a known white nationalist, news that broke one day after O'Toole declared there's no room in his party for far-right extremism or racism.

Sloan claimed he was not aware of the donation previously, and as soon as he learned of it, asked the party to return the money.

But Sloan's extreme socially conservative views had been a thorn in the party's side and there had been mounting pressure on O'Toole to kick him out.

During his 15 months as an MP, Sloan has faced accusations he's racist, drawn condemnation for his views on LGBTQ rights and for his anti-abortion stance, all leading to periodic calls he be tossed from the party's benches.

"I’ve worked well with many social conservatives in our party over the years. They are welcome in our party, but Derek Sloan’s behaviour is not," wrote former Conservative cabinet minister John Baird on social media this week.

That O'Toole initially billed the decision to oust him as being based on the donation was a source of frustration for many MPs. Any one of them, in theory, could have accepted and overlooked a similar contribution as vetting the pedigree of each contributor would be impossible.

Several told O'Toole during the meeting he had to come clean about why Sloan was getting the boot, otherwise he was setting too high a bar for them all.

During his 15 months as an MP, Derek Sloan has faced accusations of racism, and has drawn condemnation for his views on LGBTQ rights and for his anti-abortion stance. #cdnpoli

"“The Conservative caucus voted to remove Derek Sloan not because of one specific event, but because of a pattern of destructive behaviour involving multiple incidents and disrespect towards the Conservative team for over a year," O'Toole said in his statement after the meeting,

"These actions have been a consistent distraction from our efforts to grow the party and focus on the work we need to do. Events of the past week were simply the last straw and led to our caucus making the decision it did today."

O'Toole won leadership of the party, however, partially on the strength of Sloan's supporters, and he took pains Wednesday to try to assuage concerns the move was meant as a swipe at them.

“I did not vote to remove Derek Sloan from our caucus because he is a social conservative. We have members of Parliament of deep compassion and unmatched character, who like many Canadians, draw strength from their faith," he said.

"The Conservative party is a big tent that is reflective of all Canadians."

But the most recent knock against Sloan was his effort to mobilize supporters to participate in a Conservative policy convention in March.

The party is investigating whether his use of robocalls to get people to register for the convention runs afoul of telecommunications regulations. His use of the party's membership list to encourage delegates to register also ruffled feathers and is under review and the party has said he's been unco-operative in that process.

While socially conservative groups are traditionally quite active at Conservative conventions, their ranks swelled during the leadership race, given both Sloan's and Leslyn Lewis's campaigns explicitly targeted those constituencies.

With strong enough numbers, resolutions they want to advance have a better chance of passing, including one that would delete a policy pledging that a Conservative government will not regulate abortion.

That in turn would jeopardize O'Toole's efforts to present the party as more centrist.

In his email Wednesday, Sloan urged his backers not to give up, a spirit echoed by the Campaign Life Coalition, which accused O'Toole of trying to deflate people's enthusiasm.

"Don't give O'Toole exactly what he wants," the coalition's Jack Fonseca wrote in the email.

"We are so close to winning at the convention that even if Derek gets expelled, we need to stay engaged in the convention to make the party more socially conservative in its policy declaration."