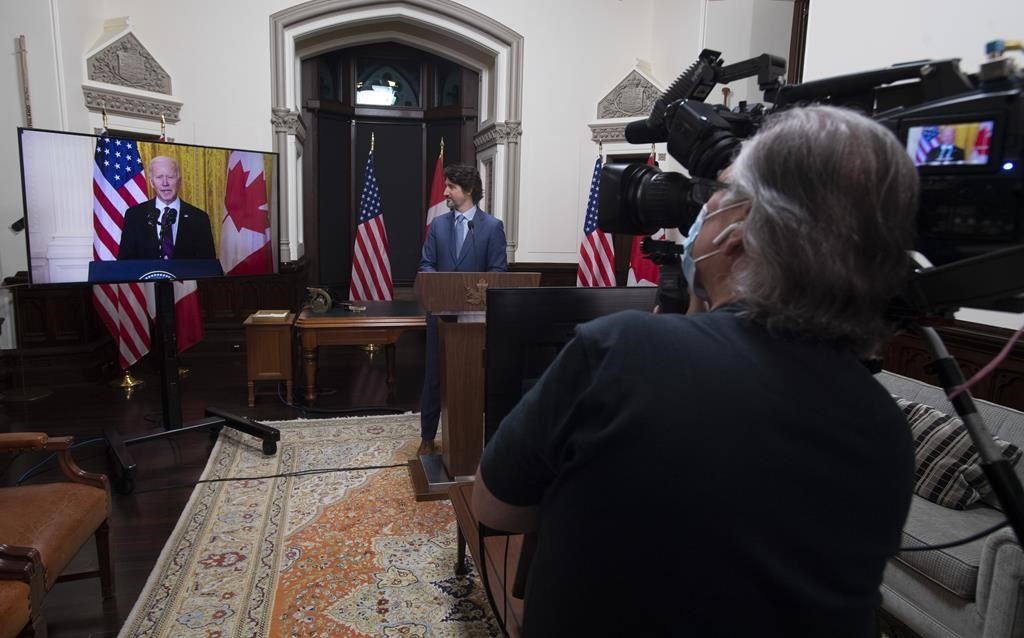 Canada has indeed asked the United States for help in procuring doses of COVID-19 vaccines, but the White House refused to say Wednesday whether it has agreed to the request.

Press secretary Jen Psaki was responding to reports about Canada and Mexico clamouring for surplus doses — including one from Bloomberg News that the two countries would top the list when the time comes.

"We have received requests from both Mexico and Canada and are considering those requests carefully," Psaki said.

"I don't have any update for you on whether they will be granted and a timeline for that."

Instead, she repeated the long-standing White House position that President Joe Biden first wants to ensure that every American who wants to can get vaccinated, and that it happen as soon as possible.

"We are still in the midst of fighting the war against the pandemic, right here," Psaki said, acknowledging the U.S. is currently leading the world in getting its residents vaccinated.

That's largely because of the country's virtually unrivalled capacity for developing and manufacturing vaccines, which has been almost exclusively focused on meeting domestic demand.

But the international responsibility that comes with that manufacturing capacity is not lost on Biden, who also understands the importance of getting people vaccinated around the world, Psaki said.

"The president wants to be, we all want to be, contributing members of the global community and getting the pandemic under control," she said.

"Any decision we make about requests … will ensure that we're able to still quickly vaccinate the American people, as that remains our top priority."

Canada, a country devoid of its own domestic manufacturing pipeline, has been lagging in its vaccination efforts, thanks in part to lingering production problems. Export controls in Europe, which have so far not affected Canada's shipments, are a potential threat.

The bottlenecks are only beginning to clear. Health Canada says more than 8.5 million doses of the Pfizer-BioNTech vaccine are scheduled to arrive in Canada over the next eight weeks.

Shipments of the two-dose Moderna vaccine have not been confirmed past the end of March, while a delivery date has yet to materialize for the other two vaccines — the Oxford-AstraZeneca shot and a single-dose option from Johnson & Johnson.

The Serum Institute of India is to ship another million doses of its version of the AstraZeneca vaccine next month, with an additional 500,000 in May, but it is not clear when those will arrive.

Canada is also counting on an additional 1.6 million doses of AstraZeneca being shipped from a production facility in South Korea before the end of May.

In the weeks since last month's virtual meeting between Biden and Prime Minister Justin Trudeau, cabinet ministers in Ottawa have been liaising electronically with their American counterparts to reinforce what both sides have been billing as a new era in Canada-U.S. relations.

On Wednesday, it was François-Phillippe Champagne, Canada's minister of innovation, science and industry, who raised the subject of vaccines with U.S. Commerce Secretary Gina Raimondo.

"When you're talking about strengthening North American supply chains, by implication you have to talk about medical supply chains — whether it's the manufacturing of essential medical supplies or vaccines," Champagne said in an interview.

"It is something that I raised in terms of making sure that we work together to ensure the health and safety of people on both sides of the border."

It's also likely to be a key variable when the time comes to begin the process of reopening the Canada-U.S. border, which has been closed for a full year to all but essential travel and trade.

Vaccination, Champagne said, is "the best way to ensure the health and safety of the people and eventually be in a position to reopen the economy."

"I think what you see is a renewed sense, or renewed spirit of co-operation and collaboration, to protect the health and safety of people on both sides, but also to foster jobs and growth on both sides of the border."

AstraZeneca vaccine now recommended for use on seniors: NACI