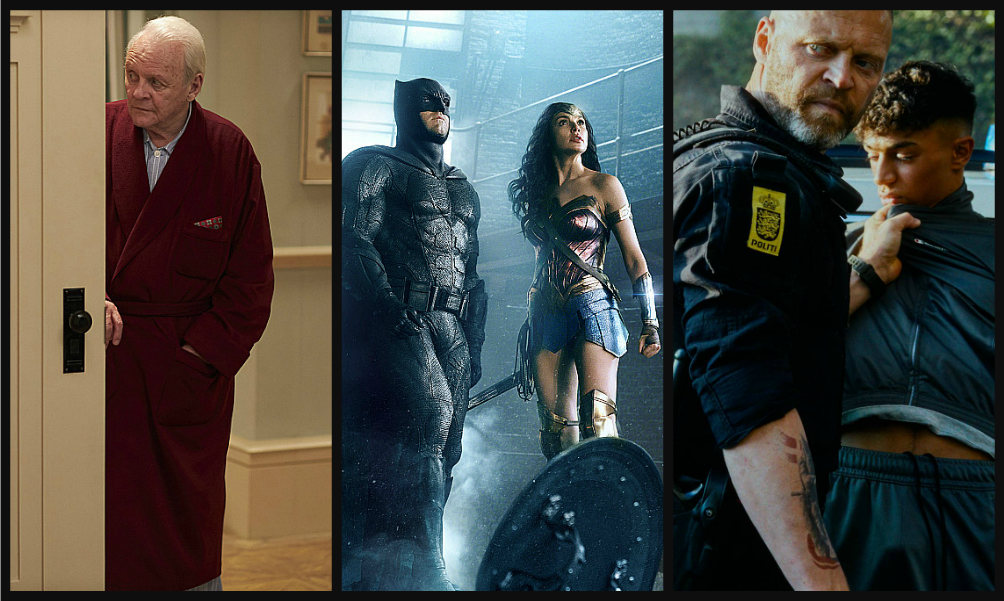 Also: The full story of the college admission scandal, and Emilia Clarke in Kentucky.
Previous story
Next story

The Oscar nominees are in. Delroy Lindo and Da 5 Bloods are still out, and Mank has 10 nods. How? I’m fine with the other choices and review one today. I’ve been waiting for The Father since the fall. It may not be available for everybody for another week, but watch for it.

The Falcon and the Winter Soldier: 3

THE FATHER: Finally, after loads of press following screenings at festivals (including Toronto and Vancouver), it is available to be seen. Not widely yet, but just in time. It got six Academy Award nominations this week, including best picture, best lead actor (Anthony Hopkins) and best supporting actress (Olivia Colman). It deserves them all because the acting is superb and the film is a very moving representation of dementia and the personal feelings it creates in both the people living with it and those having to deal with it. Also, it just might make you ponder your own future. Is this what we all face eventually?

It’s a family drama that plays like a psychological thriller. Dementia in the movies is usually shown by how others see it: caretakers, family, and so on. Here, we see it that way, but even more so feel it through the experience of the victim. That’s subtly and/or cleverly done through the writing and direction by Florian Zeller, working from his own stage play. Anthony (the old man is also named that) sees his London flat and the people who come visit differently every day. Sometimes a different actor plays the same character. There are small changes in the apartment scene to scene. The effect is disorienting for us, but probably true to the old man’s view. Hallucinations maybe. Hopkins does a masterful job of conveying his changing emotions, from angry insistence (“I don’t need anyone”), to suspicion (“There’s something funny going on”), to charming to insulting. People who’ve dealt with dementia patients will recognize it all. Colman, meanwhile, conveys patience as the dutiful daughter trying her best. (In some theatres now and available digitally and on-demand March 26.) 4½ out of 5

ZACK SNYDER’S JUSTICE LEAGUE: It was just called Justice League when it came out 3½ years ago. It’s back, twice as long, with additions and changes, but really is the same film. Don’t tell the fans that because they fought for years to get it. You see, Zack had to leave the original project, Warner Brothers had another director finish it and fans and critics didn’t like the result. They imagined that there’s a true Snyder version on a computer somewhere, clamoured for it and now have it. They’ll go through it and detail exactly how it is different, but I’ll say this: It tells its story better, there’s actually a point to it (backing unity and harmony) and even with its four-hour running time, never gets tedious. You could build in your own intermission since it rises to a couple of crescendos along the way that feel like they could be endings.

The plot is typical: A nefarious character wants to control the universe. He’s called Steppenwolf and he’s working for a higher-up (Darkseid) who has been added, maybe just boosted, in this version. (There’s also a new character at the end of the film that’ll have the fans excited.) Three so-called “mother boxes” have to be gathered by the bad guys and Batman (Ben Affleck) forms a team to stop them. They’re Wonder Woman (Gal Gadot), The Flash (Ezra Miller), Aquaman (Jason Momoa), Cyborg (Ray Fisher) and a brought-back-from-the-dead Superman (Henry Cavill). That’s not a spoiler: He’s in the opening credits. Amy Adams as Lois Lane, Diane Lane as Clark Kent’s mother, Jared Leto, Connie Nielsen, Willem Dafoe, Robin Wright, Jeremy Irons, and Jesse Eisenberg are also in the richly stocked cast. The film moves at a good pace and throws out thrills one after the other while also outlining each character’s personality better than before. The fans will probably enjoy it. (Available on Crave.) 3½ out of 5

THE FALCON AND THE WINTER SOLDIER: Marvel has to keep up with the Batman and Superman people over at DC, and though it hasn’t had a new movie in months because the theatres are closed, it has turned to television with success. WandaVision was a hit and this new series could be, too. The production values are strong and there are lots of connections to be made back to big movies. Fans will already know them, but note that this series (in six parts) follows directly after Avengers: Endgame. At its end, the Falcon (Anthony Mackie) and Bucky Barnes (Sebastian Stan) met and now carry on as friends.

The Falcon is back in Louisiana as Sam Wilson helping his sister keep the family fishing business going. Bucky is in therapy for many years of psychological damage suffered as an unwitting assassin known as The Winter Soldier. There are rumours that there are more. Other characters from earlier movies are sure to show up (judging by the names in the credits). But we’ll have to wait for more chapters to play out, one each Friday. In this first one, there’s a big action spectacle to start, lesser scenes in Switzerland and Tunisia, a new Captain America introduced in Washington and even a table-top game of Battleship. In other words, no clear direction as of yet. Bucky’s trauma might be the central storyline, but so far, Episode 1 serves only as an introduction to the series. (Disney+.) 3 out of 5

ENFORCEMENT: No, this is not Minneapolis or Baltimore or any American city struck with racial tension and violence after a cop’s rough takedown of a minority man. It just feels exactly the same, though it takes place in Copenhagen. A Muslim man is dying, two cops are sent to cruise and keep the peace near his neighbourhood. They’re not to go inside, but drift in anyway, find themselves trapped and can’t get out while the city around them explodes in rioting. The film amps up the tension immensely, but also gives us an atypical view of the situation. It’s not good versus bad. Nobody is one or the other. That’s a fresh slant in films like this.

Jacob Lohmann and Simon Sears play the two cops, and we understand right off the top that the first one is bitter from years of dealing with low-lifes and poor immigrants. True to form, he humiliates a Muslim youth in public as soon as he gets to him. Simon’s character shows he’s good by visibly objecting (not vocally or physically, though), and we later learn he has kept quiet about abusive cop's behaviour before. Jacob’s character, meanwhile, starts showing some sympathy for the people he has to police and a great deal of hate for the government policies that keep them that way. Our expectations are subtly turned around and broadened, both about them and the difficulties police face in doing their job. And they still have to get out of the ghetto. The film is exciting and thoughtful. (Streaming at VIFFConnect.) 4 out of 5

OPERATION VARSITY BLUES: THE COLLEGE ADMISSIONS SCANDAL: I finally got a good appreciation of how this scandal worked and unravelled. It came in this novel presentation. Re-enactments drive this documentary (even more than the usual documentary talking heads) and explain it all.

Rick Singer, the villain of the piece, is briefly seen in news footage, but widely played by Matthew Modine. They even look alike. Singer ran a consulting business in California to help sons and daughters of rich people get into the university of their choice. Everybody wants Harvard or Yale or Stanford, so his “tutoring,” which could go so far as having a stand-in write a SAT or admissions exam, was popular. Some well-known people went to jail for it, but not Singer (though the case is still pending). He co-operated with the police when he was outed and that got him special consideration. He allowed his phone calls with parents to be wiretapped and this film constructs its re-enactments out of those conversations. They finally clarify the scam. And reporters, observers and a few students describe a system that has become toxic. Education is now a commodity and mandatory. Singer offered a “side door.” It’s a shameful story. (Netflix.) 4 out of 5

THE FEVER: This one plays quietly but don’t let the minimalism fool you. There’s a strong statement here about Brazil’s indigenous people. They’re increasingly cut off from their culture as the Amazon rainforest is cut down and they have to work in the city. Justino, the lead character, is a security guard at a cargo port. He walks among the giant stacks of containers, complains of having to eat “supermarket” food and hardly speaks his traditional language anymore. “You really have turned white,” a friend tells him.

The film’s director, Maya Da-Rin, studied ethnography at university and that shapes her story. Many of her actors are Indigenous. The “real Indians” from back home become “tame” in the city. Justino, played by Regis Myrupu, of the Desana people, feels two worlds pulling at him. He develops a sudden fever and starts hearing animals at night in the woods when his daughter announces she’ll be leaving to study nursing. His brother says come back to your village; let the shaman look at you. He’s urged to be strong like his ancestors. There’s a slow cryptic start but the film toughens up as it makes its points, one of which is an implied blast at Brazil’s right-wing government. Incidentally, Manaus, the port city in the film has since become a COVID-19 hotspot. (Streaming at https://thecinematheque.ca) 3 out of 5

ABOVE SUSPICION: Here’s a chance to find out how Emilia Clarke is keeping her career going after Game of Thrones. Doing something completely different, that’s how. And prompting the question: What exactly is the point of this film? Why was it made? It feels like one of those lurid stories we used to see on half-hour American current affairs programs like Hard Copy. Phillip Noyce is the director.

Emilia plays a restless woman in a small Kentucky town who has eyes for an FBI agent (Jack Huston) newly assigned there. Since she knows who all the drug dealers are in town and is even married to one (Johnny Knoxville), she becomes an informant. She also gets it on with the agent, who she describes as “like a dream,” and later claims to be pregnant with his child. The agent’s wife had invited her to live in their house to shelter her. The story is true, and we get it via Emilia’s voiceover, which is also a spoiler. As she says right at the start you get too much time to think when you’re dead. Her thoughts aren’t deep, just motivated. “You do what you gotta do,” she says. (EST, VOD, DVD and Blu-ray.) 2 out of 5