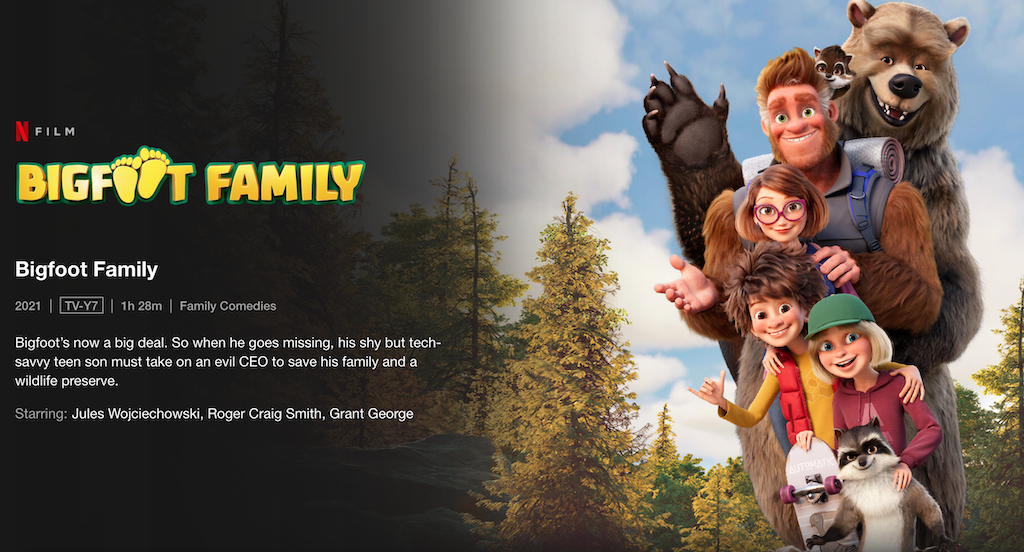 There aren’t many things more embarrassing than a government picking a fight with a children’s cartoon, but Jason Kenney’s UCP found a way to outdo themselves on that front. Their government’s hapless "war room," which seems to specialize in self-inflicted gunshot wounds, decided to take aim at a mediocre Netflix animated movie called Bigfoot Family, which revolves around a plot line about an oil tycoon who wants to blow up a nature reserve to get at the riches that lie underneath.

This is standard fare for anyone who was reared on children’s cartoons in the 1980s and 1990s, which included anti-forestry storylines in The Raccoons and any number of pro-environmental plots in The Smoggies. But for the Kenney government, it was an intolerable attack on their favourite industry — and an apparently irresistible target for retaliation.

When confronted with the blowback from their campaign, which encouraged people to write Netflix Canada’s head of communications asking that her company “tell the true story of Canada’s peerless oil and gas industry, and not contribute to misinformation targeting your youngest, most vulnerable and impressionable viewers,” Kenney and his government refused to admit defeat.

Instead, the premier described the numerous international news stories from outlets like The Guardian and Al Jazeera as a “success story,” which suggests he doesn’t actually know what success looks like. One of his MLAs, Airdrie-Cochrane’s Peter Guthrie, even suggested the surge in viewership for the movie spoke to the war room’s power. “I think that’s pretty awesome if they have that kind of ability,” Guthrie said.

There are any number of ironies here, including a government that routinely speaks out against “cancel culture” trying to cancel a children’s cartoon because it hurts some people’s feelings. But while said cartoon is actually set in Alaska, not Alberta, the sinister plot it revolves around almost happened in the war room’s backyard.

In the late 1950s, something called “Project Cauldron” — later rebranded as “Project Oilsand” — seriously contemplated the idea of using nuclear weapons to extract oil in northern Alberta. Under a 1958 proposal, up to 100 nuclear explosives would be detonated in order to create heat and pressure that would boil the bitumen and allow conventional oil and gas drilling techniques to access it.

The war room’s campaign against Netflix has only increased the wattage of the spotlight shining on this inconvenient truth, along with the government’s ongoing campaign against environmentalists, the media and other alleged enemies. This is a textbook case of the“Streisand Effect,” which suggests that drawing attention to something you want people to ignore only increases their interest in it.

But while this strategy seems ruinously stupid, there may be a reason why the UCP government and its phalanx of issues managers, press secretaries and other proxies are betting so heavily on such a bad hand. That’s because, as much as they stand to lose here, they may win simply by not discussing the other major news of the past week — news that doesn’t speak well of the government’s overarching economic strategy.

Last Monday, Rogers Communications announced it was buying Shaw Communications, the largest non-oil and gas company with a head office in Calgary, in a $26-billion deal. And while Rogers has promised the takeover won’t result in job losses, it’s hard to square that with the other news of the week, which was a second round of layoffs at Cenovus Energy. Cenovus, which bought Husky Energy last year in an equally massive transaction, had said it would cut between 20 per cent and 25 per cent of the combined workforce, and it made good on that with an additional 800 to 1,000 layoff notices on Tuesday.

This is deeply troubling news for a government that rode to power in 2019 on the slogan of “jobs, pipeline, economy.” So far, the jobs have yet to materialize, and as the oil and gas companies continue to consolidate to remain competitive, it stands to reason more job-killing takeovers are yet to come. With the government rolling craps on its $1.5-billion Keystone XL bet and the economy still in recovery mode, Kenney’s UCP doesn’t have much to show two years into his mandate. That might explain why he’s consistently ranked as one of the least popular premiers in the country, and why the NDP keeps polling ahead of his UCP.

Picking a fight with Netflix isn’t going to change any of that, and it could even theoretically dissuade the American company from making future investments in Alberta’s film and television industry. But for Jason Kenney, who is somehow more unpopular than Justin Trudeau in Alberta right now, near-term political survival trumps any longer-term economic concerns. The rest of the province will be left to pay the price for that choice.

The fall of Jason Kenney

Could it be that we are

Could it be that we are witnessing the beginning of a new age in politics? People may be looking for the truth, even if it is not good news rather than hearing the usual bull that their "leaders" feed them. What could be better than listening to a speech that admits change and loss but outlines a plan to act in the face of this for a promising future?

This period of time is

This period of time is proving to be something of an IQ test for Albertans. Sure, fighting can be fun, and Jason ran and won promising to 'end the war on fun' in our backcountry....presumably to bring back 'the fun of war' in an ideological sense. But war isn't really much fun, if you're actually in it.....and nor is it profitable, if you count the externalized costs. We can perhaps be thankful that so far the war is just ideological, but who knows when we'll need to bring out the actual dogs........opposition to Kenney's war on the environment, and the common's environment at that.......is growing.

People who can do the math, add up the actual balance sheet of wins and losses, are losing their appetite for the UCP solutions to problems that are real...........and can't be bullied away. Returning to coal and removing coal rich mountains isn't going to fill Alberta's coffers........and when someone makes a good movie about that wealth creating scheme, Albertan's are going to watch it.

Heck.........we can surf the internet to the devastation mountain top removal created in the Appalachians, and get a quick synopsis of the future Jason has in mind for our watersheds. The war to prevent that fate for Alberta will be less cartoon, more epic. And the world will be watching.

It should be obvious by now

It should be obvious by now to his more moderate former supporters that Jason Kenney and his itemized UCP policy platform have very little legitimacy to offer. Ideology is not a substitute for a sound planning process to fix Alberta's current woes, let alone to anticipate the future. War Room "exposes" have nothing to do with genuine economic strategy or evidence-based science. Attacking feature-length cartoons is at the same level of competence as the immature discourse founded on conspiracies. Cumulatively, this makes Alberta the subject of ridicule on top of the more serious mounting environmental liabilities and oil-related de-investments and job losses.

Sadly, all this could lead to long-term economic and political upheaval in Alberta. The world is inexorably decarbonizing, yet prognosticators for oil industry hegemony continue their habitual trend to up their demands for the rest of the nation pay for cleaning up the mess Alberta created.

Now, what would the rest of Canada say to that?