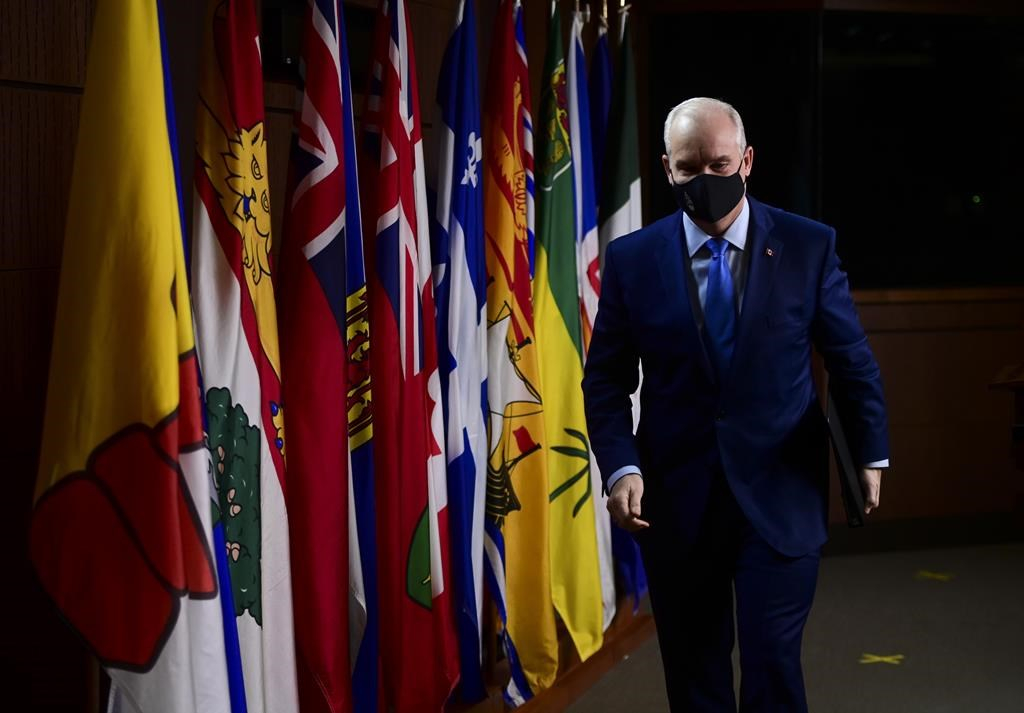 Federal Liberals swiftly adopted a new attack strategy Monday to paint the Official Opposition as climate-change deniers, after a weekend convention that saw the Conservative party grassroots reject a motion to declare climate change is real.

At multiple committee meetings, during MP statements in the House of Commons and in answers during question period, Liberal MPs jumped at the chance to point out the vote.

"I know it is discouraging to many Canadians that a major political party in this country will not acknowledge this basic scientific fact and the threat it poses to future generations," Environment Minister Jonathan Wilkinson said Monday.

He was responding to a question from Conservative deputy leader Candice Bergen about the federal government's COVID-19 pandemic response plan.

Appearing before the House of Commons natural-resources committee earlier in the day, minister Seamus O'Regan was supposed to be answering questions about his department's budget and priorities. But he instead turned the tables on the Tories, asking many of them for their positions on climate change.

"Sir, I'll be honest, I want to have a meaningful conversation with somebody who believes in the reality of what is going on, on this planet," O'Regan said, refusing to answer a question from Alberta MP Jeremy Patzer about the Enbridge Line 5 pipeline.

Patzer never did answer the question. Earlier, Calgary Centre MP Greg McLean did, and said he does believe climate change is real and that O'Regan already knew that. O'Regan admitted he did but that didn't stop him from pressing the point anyway.

It is the kind of political fallout Conservative Leader Erin O'Toole warned about in his speech to the convention Friday, a day before the vote.

He told delegates that unless they stop debating the basic fact of climate change, Tory candidates will suffer in the next election.

“I will not allow 338 candidates to defend against the lie from the Liberals that we are a party of climate-change deniers,” he said. “We will have a plan to address climate change. It will be comprehensive, and it will be serious.”

But 54 per cent of delegates at the convention — which was held virtually — voted against a motion to add the following to their policy book on the environment: “we recognize that climate change is real. The Conservative party is willing to act.”

The results were announced after O'Toole's speech but the voting took place before it.

The existing document does discuss curbing greenhouse-gas emissions but does not specifically acknowledge the existence of climate change.

"In order to have a strong economy and maintain good health, Canada must have strong, co-ordinated and achievable environmental policies," the environment section reads.

"The Conservative party believes that responsible exploration, development, conservation and renewal of our environment are vital to our continued well-being as a nation and as individuals."

The Conservatives' 2019 election platform on the environment did explicitly say, "Canada’s Conservatives recognize that climate change is real and evidence from around the world clearly shows that there is a global warming trend."

When asked about the issue after the vote Saturday, O'Toole repeated most of what he said in his speech.

Manitoba Premier Brian Pallister, a former Conservative MP, said the vote at the convention is disappointing.

"I am confident the federal leader is disappointed as well," he said. "I know him, I know his views on climate change and they are not just that it's real but that there needs to be comprehensive action taken to address it."

Regardless of the vote, the Conservatives will need a sound climate-change plan by the next election, Pallister said.

"We'll get through it but it would have been better not to have had some of the discussions."

The environment and climate change will again take centre stage later this week, as the Supreme Court issues its verdict on whether Ottawa can impose a carbon price on provinces that don't have equivalent systems of their own.

Several provincial Conservative governments that oppose a consumer carbon tax have endorsed and introduced a price on emission from big industry, including Ontario and Alberta.

—With files from Steve Lambert in Winnipeg

Conservative grassroots at stake during this convention

Pretty rich for the party

Pretty rich for the party that buys pipelines to attack the climate change denial party.
The openly denialist party is at least upfront and consistent in its position. What you see is what you get.
The Liberals' hypocrisy is so thick, you could cut it with a knife.
*
This is the same Liberal Govt that declared a climate emergency one day and approved the TMX pipeline expansion the next.
Trudeau: "No country would find 173 billion barrels of oil in the ground and just leave them there."
Under climate leader Trudeau, Canada's GHG emissions in 2018 hit levels not seen in a decade.
*
Oilsands expansion enabled by new export pipelines will prevent Canada from meeting its inadequate targets for decades.
Canada does not even report its emissions accurately. As multiple studies based on actual measurements show, Canada's oil & gas industry grossly under-reports its emissions — of all types. The industry's emission stats are fiction. Grossly under-reported oilsands emissions do nothing but climb year after year. AB's emissions show no sign of falling.
On climate, Trudeau is full of hot air.
*
The Liberals and AB/BC NDP have proved far more effective than the Conservatives in delivering on Big Oil's and Corporate Canada's agenda. Trudeau & Co. have persuaded many Canadians that we can both act on climate and double down on fossil fuels. Clearly insane and contradictory policy.
Trudeau & Co. have no viable climate plan to meet Canada's targets. Mired in denial, they are determined to fail.
*
"The New Climate Denialism: Time for an Intervention" (The Narwhal)
• https://thenarwhal.ca/new-climate-denialism-time-intervention