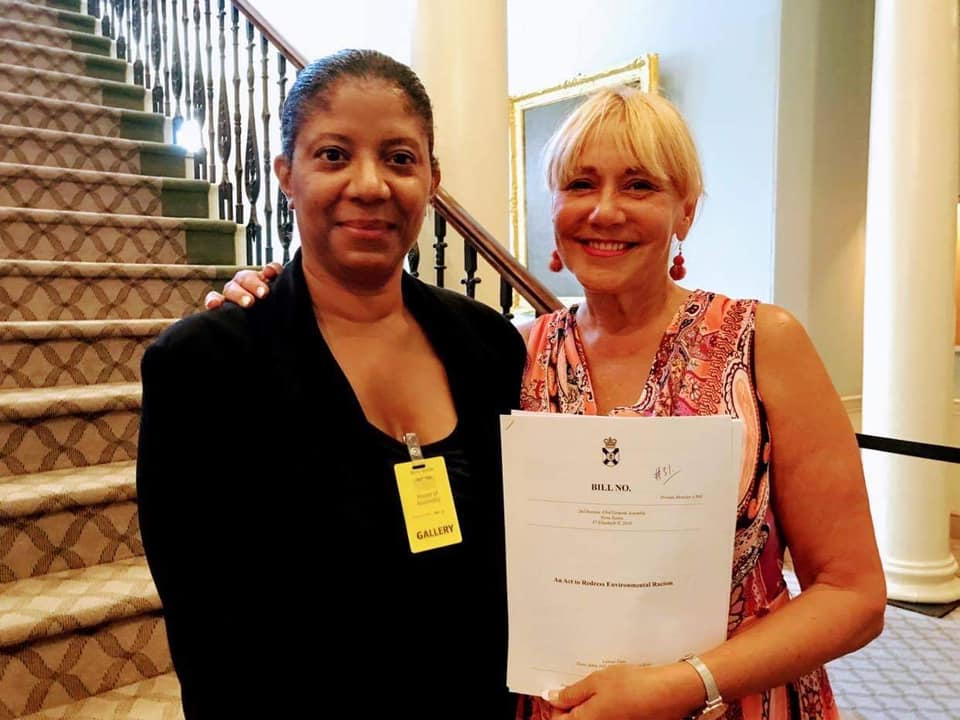 Conservative and Bloc Québécois MPs say they are against a proposed private member’s bill that aims to address environmental racism.

Bill C-230, sponsored by Liberal MP Lenore Zann, headed to second reading in the House of Commons on Tuesday.

The bill would require the federal government to collect data on locations affected by environmental hazards, and to examine their connections to race, socioeconomic status and health.

Within two years of the bill's passing, the environment and climate change minister would be required to publish a report laying out a national strategy on reducing the harms caused by environmental racism in Canada.

Zann tried to bring forth a similar bill in 2015 when she was a member of the Nova Scotia legislature, however it was defeated after second reading.

According to Dr. Ingrid Waldron, associate professor in the faculty of health at Dalhousie University in Halifax who helped Zann craft the previous and current bills, environmental racism is when neighbourhoods primarily populated by Indigenous, Black and other racialized populations and members of low socioeconomic backgrounds are often burdened with a disproportionate number of environmental hazards.

Waldron says there are many instances of environmental racism across the country, including the so-called “Chemical Valley,” an area around Sarnia, Ont., and home to a large concentration of petrochemical plants and refineries, which release pollutants and chemicals that have significant impacts on the Aamjiwnaang First Nation.

“If you are racialized, and you're low-income, and you live in out-of-the-way places, you often don't have the resources, you don't have the political, social or economic clout to fight back in a way that communities that are more privileged would have,” she told Canada’s National Observer.

During first reading in December, the bill received support from the Liberals, the NDP and the Greens.

Bloc MP Kristina Michaud said she doesn’t agree with the bill because it legislates for “special groups,” suggesting it be “universal” so all Canadians have access to a clean environment.

She also takes issue with the fact that the bill designates the federal environment minister to develop a strategy.

Bloc MP Kristina Michaud said she doesn’t agree with the bill because it legislates for “special groups,” suggesting it be “universal” so all Canadians have access to a clean environment. #cdnpoli

“The Bloc, unfortunately, cannot accept legislation such as this. Quebec territory belongs to Quebec, and it is up to the government of Quebec to protect that territory,” Michaud said.

Meanwhile, Conservative MP Eric Melillo says he doesn’t have confidence in the Liberals to effectively deal with issues related to the environment and climate change.

“The Liberal track record on these issues has been all talk and very little action,” Melillo said.

Waldron says she’s “disappointed” that some MPs are not seeing the importance of addressing the racial components of this bill.

Beyond understanding, Waldron also thinks there’s a lack of support for the bill because of the financial costs of alleviating this issue.

Voting on the bill is to take place Wednesday afternoon. If passed, it will be sent to the environment parliamentary committee for further study.

However, if it’s struck down, Waldron says the work to address environmental racism won’t stop.

"This is not going to deter me. I'm going to continue to do it,” Waldron said. “If it's not me leading that and somebody else, one of the youngsters that I'm mentoring, then so be it. But at some point, it will pass.”

Congratulations to Liberal MP Lenore Zann and Dr. Ingrid Waldron (Dalhousie University) on proposed bill C-230 which represents their commitment and efforts to address 2 very important issues facing Canadians: environmental degradation and racism. I remember a wise man once saying to me: When you begin a negotiation it is best not to kick the other person in the shins ... or even have the appearance of doing same. I wonder if the bill would gain better traction if it simply proposed that a priority be made of sites with the worst environmental degradation. If, indeed (and I personally suspect this is true) this would include a large number of sites near racialized and marginalized communities, then Zann's concern would be addressed without, perhaps, while avoiding at least one line of opposition. I offer thanks and best wishes to both women.

"I wonder if the bill would

"I wonder if the bill would gain better traction if it simply proposed that a priority be made of sites with the worst environmental degradation." This is the key argument.
Welloff folks don't buy houses next to polluting industries and generally have the leverage to defend against locating such sites in their neighbourhood. Conflating the issues of poverty, pollution and racism in legislation does nothing to clarify the issue of industrial pollution or issues around systemic racism and its resulting poverty. In Nova Scotia, for a counter example, the Sydney Tar Sands inflicted an environmental horror for over 50 years on a white neighbourhood that was poor, not racialized; and it was the lobbying of rich businessmen that kept the steel mill open, not racial prejudice. Resolving that problem required implementation of environmental controls, not anti-discrimination laws.

I tend to agree with Alan

I tend to agree with Alan Ball. Conflating poverty, racial discrimination and environmental damage is such a no-brainer that I can't even imagine anyone disputing this with a straight face.

I grew up in the U.S. and my almost entirely white community entertained total, casual racism and discrimination against minorities including but not limited to: wops, polaks, kikes, spics.... I'm sure there were more including of course the "N" word - but I can't remember them all. One has to remember it was post war and the wartime/soldier slang was everywhere, infecting even the formerly genteel families; and our towns were being swelled by the ranks of the 'DP's' immigrating to the US.

Most of this was fading when I left the US for the Canadian University which was all my shabby genteel family could afford (largely thanks to a very substantial currency differential). Nevertheless, those fears and prejudices persisted among members of my extended WASP family right through the Civil Rights era. Nobody made much of an issue about it but we all knew that the undesirables clustered in the least desirable residential areas - it was simply expected as normal. Some of us realized as the interstate highways began to cross our municipalities that it was the 'least expensive' neighborhoods the government expropriated to raze and make way for the roads. It was done obviously for reasons of economy and made perfect sense. There was little concern about the lives of those displaced, nor any redress for the low values the state assigned the properties when seizing them. I doubt they could get away with this cavalier process these days and it may help to explain the paucity of infrastructure renewal in the heavily urbanized built environments on the East Coast.
Much of my state along the coast was heavily industrialized and a polluted nightmare prior to the environmental awakening. What had once been a fabulously rich wetland complex and vital stopover for migrating birds became first a noxious swamp and then was filled in and turned to more or less solid ground used for more industrial and polluting industry. The Jersey Meadows, the most misnamed and disastrous example of corruption, industrial toxicity, and notoriety can still be smelled even as one speeds (or crawls) by on the ribbons of concrete built on top of and beside a once vibrant wetland. Astonishingly one can still see the occasional flocks of waterbirds paddling on the brackish canals that drain the swamp.

Environmental racism still exists and is always driven by capitalist greed. Capitalism's only measure of "success" is profit and woe betide the land, the creatures, the people who stand in the way of PROFIT!