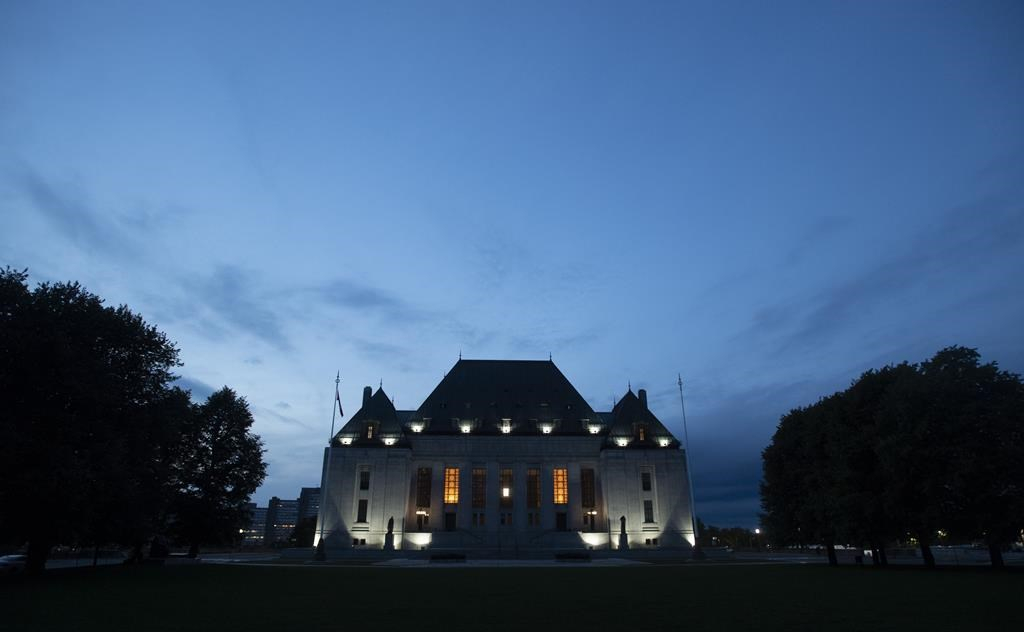 The Supreme Court of Canada is seen at sunset in Ottawa on September 1, 2020. File photo by The Canadian Press/Adrian Wyld
Previous story
Next story

It's make-it-or-break-it time for the federal government's national price on pollution.

The Supreme Court of Canada will decide Thursday whether Ottawa's "carbon tax" is constitutional or if the federal Liberals overstepped into provincial jurisdiction.

University of Ottawa law professor Nathalie Chalifour said the legal question is about constitutionality, but the case is existential for Canada's federalism.

"I think the broader question is does Canada have a national approach to combating climate change and greenhouse-gas emissions or is it going to have to rely on individual provinces to take action?" she said.

The legal decision also has political implications for a federal Liberal government whose climate plan rests heavily on being able to price carbon.

The decision will also be a key ruling for conservative premiers and the Opposition Conservatives in Ottawa, who have fought hard against a consumer carbon tax for years. The case is in the court in the first place because Saskatchewan, Ontario, and Alberta challenged Ottawa's law in court.

If the provinces lose, it could be a pivotal moment for Canadian politics. Carbon taxing has played a role in the last two federal elections, and been a factor in provincial elections including in Alberta and Ontario, where conservative premiers scrapped carbon-pricing systems as soon as they took power.

Ottawa argues the federal government has the power to price greenhouse gases because climate change is an issue of national concern, and emissions don't stop at provincial borders. The three provinces that brought the challenges, supported by a majority of other provinces, argued that this is an overreach into provincial taxation law and control over the production of natural resources.

The Supreme Court decision could be a landmark decision on the division between federal and provincial powers in areas that were not on the radar when Canada became a country more than 150 years ago.

The Greenhouse Gas Pollution Pricing Act, passed in 2018, sets a minimum price on carbon emissions and imposes a federal pricing system in provinces that don't have equivalent systems of their own. Right now, that covers Alberta, Saskatchewan, Manitoba and Ontario.

It's make-it-or-break-it time for the federal government's national price on pollution. #CDNPoli #CarbonTax

The levy this year, set at $30 per tonne of greenhouse-gas emissions produced, adds about $3.50 to the cost of filling a 40 L tank of gas, and about $15 on the average monthly Canadian natural gas bill. It applies on almost all input fuels including diesel and propane, coal and heavy fuel oil.

The goal is to push Canadians to curb their fuel use and produce fewer emissions. In a bid to get voter buy-in and prevent the price from raising the price on fuels and most consumer purchases, 90 per cent of the revenues are returned to families in the affected provinces through income-tax rebates. The other 10 per cent goes to programs to help small and medium-sized businesses, universities, hospitals, municipalities and schools reduce their carbon footprints.

Heavy emitters like coal-fired power plants and big factories, are charged the price on a portion of the emissions they produce rather than on the fuels they buy.

Appeals courts in Ontario and Saskatchewan upheld the law as a matter of national concern in 2019, while the Alberta Court of Appeal struck it down a year later for interfering with provinces' constitutional authority to develop their natural resources.

Stewart Elgie, director of the environment institute at the University of Ottawa, said the courts could uphold the law in its entirety or strike down one or more of the sections being challenged. But he said if the court does strike some or all of it down, he also thinks the judges could say how Ottawa could redo the law to make it work.

"If the court strikes down ... the issue for the Liberals will be how quickly can they move to redress the law so it does fall within their constitutional powers," he said. "And I say that because even if the court finds this law to be unconstitutional, it probably will indicate the federal government has the power to price carbon. It just has to use another head of power, like the federal tax power."