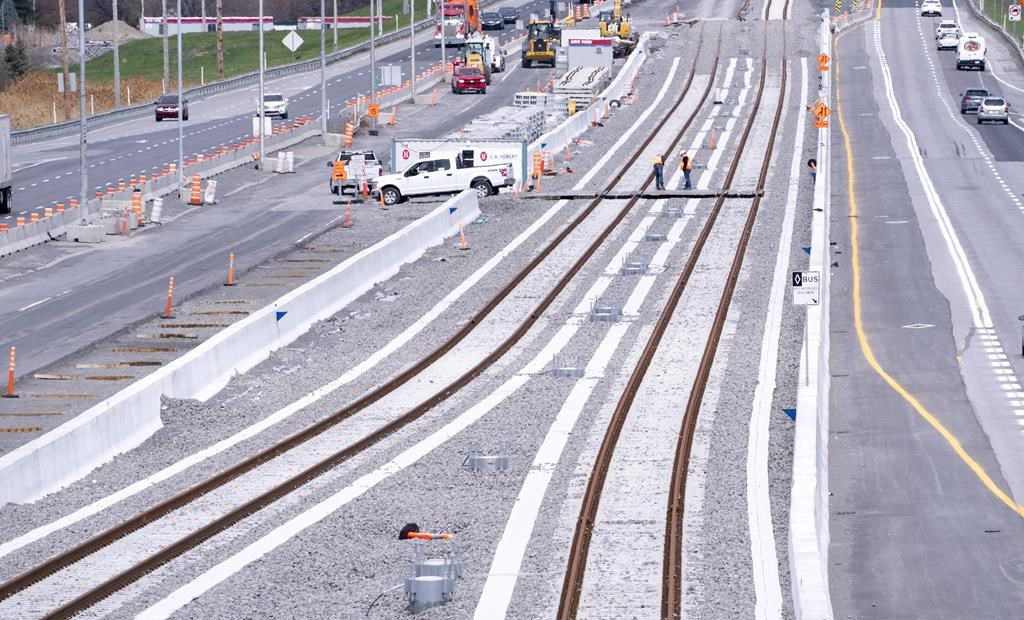 Two construction workers are seen on the site of the Reseau express metropolitain (REM), a major public transit project, in Brossard, Que. on May 11, 2020. File photo by The Canadian Press/Paul Chiasson
Previous story
Next story

The federal auditor general says the government can't show that the Liberals' $188-billion infrastructure plan is meeting its lofty goals, and warns the spending may fall short of expectations without changes in oversight.

The 12-year plan was a cornerstone of the Liberals’ successful 2015 election campaign, betting that spending big on infrastructure would speed up economic growth, create jobs and improve Canadians’ lives through new transit, green renovations and social projects.

As the audit of the plan showed, the promise has been beset by setbacks, with billions left unspent or delayed until later this decade.

Her audit team flagged failings in how information is shared among the 21 federal bodies involved in delivering the money.

The team also said that Infrastructure Canada didn’t account for programs created by previous governments in its reporting, even though those programs amount to roughly half of planned spending, at $92.2 billion.

The audit said departmental officials flagged the gap in reporting during a 2019 review, but didn't do anything about it.

Speaking to reporters, Hogan said the lack of clear and complete reporting on the infrastructure plan makes it difficult for parliamentarians and Canadians to know how well it is faring.

She added that the issues aren't new, noting similar problems in past audits that showed a lack of cross-agency co-ordination on complicated programs.

Hogan warned that without changes, it’s possible the decade of spending won’t ever meet the Liberals’ expectations for it.

The Liberals first presented the program as a two-phase effort: Spend about $14 billion quickly on shovel-ready projects and prime the pump for the larger, longer spend to follow.

But applications took longer to come in than expected, it took longer to approve projects for spending than anticipated, and there were construction delays beyond the government's control, such as inclement weather, that pushed back payment timelines.

John Gamble, president of Canada's Association of Consulting Engineering Companies, said the report highlights the need to further streamline and accelerate approvals, particularly if the sector can help in an economic recovery from COVID-19.

“The auditor general’s review of the plan says that we need to do a better job of showing our work, and I agree," McKenna said.

"Canadians must be able to see the benefits of their hard-earned tax dollars."

The federal government regularly carries over infrastructure money from one fiscal year to the next, with about a quarter of infrastructure funds left unspent in the year for which they are budgeted.

The audit noted that about one-fifth of planned funding sat unspent after the first three years, and was shifted to later years, but no one tracked the effect of this move on the plan as a whole.

Delaying and reallocating funding as the Liberals have done creates a risk that the plan won't meet its objectives by the time it is supposed to wrap in 2028, the audit said.

“The fact is the Liberals have no idea if their infrastructure plan is even working. This is bad news for Canadians looking forward to new critical infrastructure projects for their communities," said Conservative infrastructure critic Andrew Scheer.

"The billions in lost projects due to lapsed funds is bad news for workers who have missed out on three construction seasons."