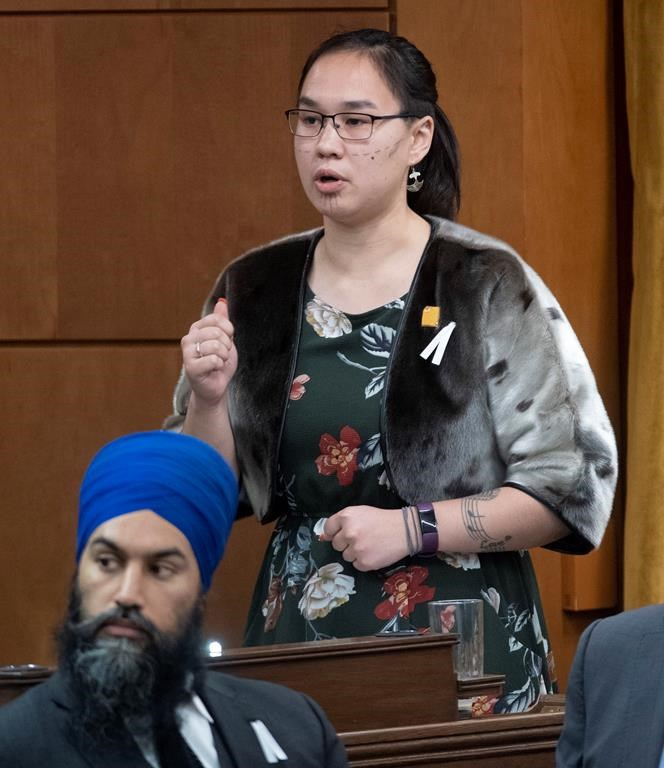 Nunavut MP Mumilaaq Qaqqaq rises during Question Period in the House of Commons, in Ottawa, on Friday, Dec. 6, 2019. File photo by The Canadian Press/Adrian Wyld
Previous story
Next story

A member of Parliament from Nunavut says she won't forget the smell of mould that permeated through houses she visited across the territory last year.

Mumilaaq Qaqqaq travelled to communities in the Kitikmeot and Kivalliq regions in the fall and winter.

She released Thursday a report called "Sick of Waiting: A Report on Nunavut's Housing Crisis," with data she collected during the visits along with personal accounts of what she saw.

"I needed to give myself a true understanding and a holistic perspective of what it means for an individual to not have access to safe space," Qaqqaq wrote in the report.

A 2019-2020 report from the Nunavut Housing Corp. said there are an estimated 3,545 families in need of housing in the territory and 56 per cent of Inuit there live in overcrowded homes.

Qaqqaq, a New Democrat elected in 2019, said she posted home visit sign-up sheets in community offices during her stays. She visited homes in several places, but the report highlights Gjoa Haven, Taloyoak, Kugaaruk, Salliq and Naujaat.

"Families shared deeply personal stories of strife within their family units because they had no space, no separation from each other. Conditions were exacerbated in the long winter months," Qaqqaq wrote.

"The thought that elders, adults and children continued to live there left me feeling helpless ... My people need help. They need that help now."

In Gjoa Haven, a community of about 1,200 in western Nunavut, Qaqqaq said a typical home she saw had a minimum of six people living in it, with three usable bedrooms. And, she said, over half of public housing units in the community are in need of repairs.

The report contains photos taken by Qaqqaq and quotes from residents. But Qaqqaq said she did not identify anyone for privacy reasons.

A member of Parliament from #Nunavut says she won't forget the smell of mould that permeated through houses she visited across the territory last year. #CDNPoli #Housing

The report quotes one Gjoa Haven woman living in a home with 12 other people.

"My sewage overflowed and only sewage was removed, it wasn't cleaned properly and mould grew and little flies appeared," the woman told Qaqqaq.

According to the report, home renovations in Gjoa Haven are "sporadic" and there is one local contractor in the community.

"One home I visited had been in desperate need of mould and sewage remediation for years, and yet the only renovations undertaken for a decade had been a new coat of paint," Qaqqaq wrote.

In Kugaaruk, a community of about 900 people, Qaqqaq said most homes she visited had plastic sheeting around windows to keep the cold out because they weren't properly insulated.

"Almost all units had window problems. Most windows were drafty and did not properly close, especially with ice buildup in the fall and winter," she wrote.

Qaqqaq also said the waiting list for social housing in Kugaaruk has grown to 100 people from 40 people over the last eight years.

"The top of the walls leak and drip into the living room and bedrooms. When mould is clearly present my mom gets skin irritations all over her body," a Kugaaruk woman told Qaqqaq.

Following her housing tour, Qaqqaq took a two-month leave of absence from her political duties because of "extreme burnout, depression and anxiety," according to a video she posted in January.

"The visits to these homes proved to be overwhelming for me. I was devastated to see the conditions under which my constituents were living. What’s worse, I heard repeatedly that they had been living under these grossly unhealthy conditions for years," she wrote in the report.

Qaqqaq is to hold a virtual public forum on Friday to discuss her findings.