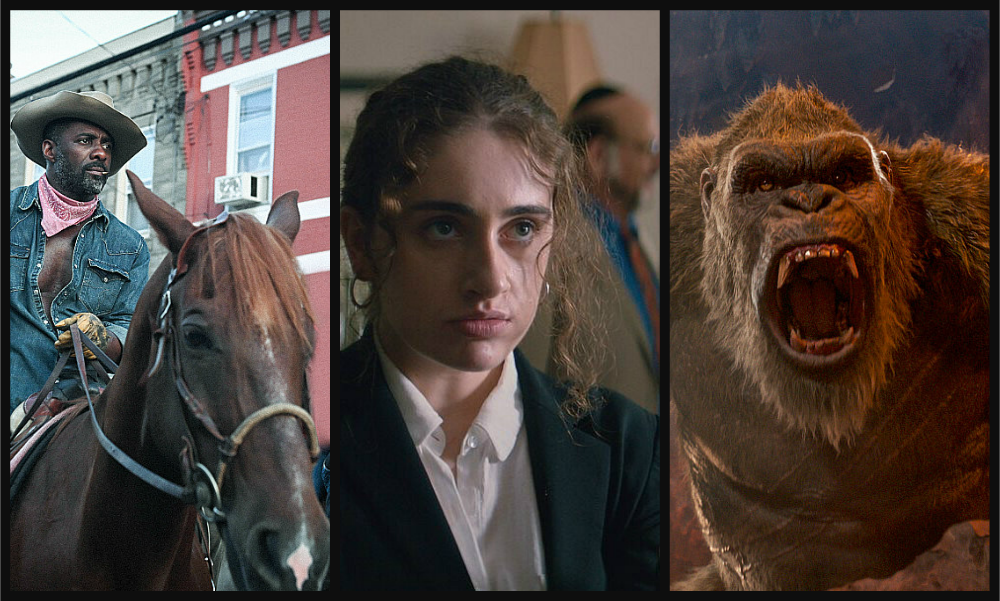 Also: Three music tales — one real, one fanciful, and one sociological.
Previous story
Next story

The nominations for the Canadian Screen Awards were revealed this week and something rare happened. I found I’ve seen almost all the contenders. I’ve reviewed many of them, and that’s a testament to the importance of film festivals. They, and a few independent theatres, show the films. Cineplex not so much.

Blood Quantum, about Indigenous people holding off an epidemic, got 10 nominations, followed by Funny Boy and Akilla’s Escape with eight each. Beans, Falling and The Nest got five each, and I was particularly happy that Underground was recognized with four. They’re all worth watching out for. The awards will be handed out next month.

You’ll find one more of the nominees among today’s reviews.

Shoplifters of the World: 3

GODZILLA vs. KONG: Between the two of them, they’ve been in 48 movies, but this is only the second time they’ve been together. The first was almost 60 years ago and no wonder. They’re from different worlds, eras and sensibilities, and it takes major script-writing contortions to make them meet up. It was easier in that earlier film because it was intended as a comedy and satire. This one is absolutely serious. There’s a search for a new energy source by a reckless entrepreneur. Kong, who has always been a victim of guys like that, is used to help find it. How Godzilla gets involved would be too much of a spoiler to reveal (that information comes late in the film), but the two giants do battle. Not a lot early on, but spectacularly later as they smash through and around the skyscrapers of Hong Kong. It’s an orgy of destruction, and frankly exciting, thanks to some great visual effects and a surprise or two.

Forget about logic, though. For instance, how they move one or both of them between Skull Island, Hong Kong, Florida, Antarctica and down inside our planet to where the energy is. Alexander Skarsgård and Rebecca Hall watch over Kong as he leads them down there. Demián Bichir is the industrialist watching from afar while his daughter represents him on the trek and a podcaster spins wild conspiracy theories. The one character with any real emotional investment in the story is a deaf-mute orphan girl who can communicate with Kong in sign language. She’s his friend and embodies the don’t tamper with nature theme. Director Adam Wingard, and especially the effects people, make it all work well. ($24.99 to rent at Google Play, Microsoft, YouTube and Amazon Video.) 3½ out of 5

CONCRETE COWBOY: It’s always pleasing to learn something new in a movie. For instance, that there are horses and cowboys in Philadelphia. Apparently, they’ve been part of the local culture there ”forever” and have been the subject of magazine articles, a novel and now this film starring Idris Elba. The director, Ricky Staub, is from the neighbourhood, and therefore presumably depicts it properly. Not perfectly, though, and that’s the problem. He has several stories he’s trying to tell and fails to mesh them effectively.

Elba is one of the riders. He stables his horse in his house and sits around chewing the fat with his pals in a park. When his estranged son (Caleb McLaughlin) is brought to him all the way from Detroit, he has to bond with him, temper his sullen rebellious streak and teach him the ways of the riders. That’s a familiar father-son story. How the cowboy colony came to be and survives is harder to grasp. Instead of real information, we get statements: Hollywood has whitewashed us Blacks right out of western movies. The colony is also under threat as gentrification creeps in. People in a nearby condo building don’t like the smell of horse manure. Shovelling it is part of Caleb’s learning process. Bonding with a volatile horse and learning to ride him helps him mature. Getting involved with local drug dealers is a threat. Those four stories are not fully told and there’s the hitch. We’re not fully engrossed, even with the novelty of the content, the realistic depiction of the Black culture there and the strong acting by the leads and side-players like Lorraine Toussaint, Jharrel Jerome and the rapper Method Man. (Netflix.) 2½ out of 5

SHIVA BABY: This very funny film about youth, secrets, awkward encounters and a slightly skewed view of the world is back after festival showings. Don’t miss it. The director and writer, Emma Seligman, is from Toronto, though now living in the U.S., and you get the sense that there’s more than a bit of herself portrayed in it by Rachel Sennott. She plays Danielle, who’s obliged to go to a shiva (a Jewish wake) though she has to ask, who is it who has died? While there, a room of familiar Jewish types talk to her, share gossip, ask if she has a boyfriend and tell her to eat. Seligman manages to show them as real people, humorous, but not stereotypes.

Danielle is terrified that an old friend, Maya (played by Molly Gordon) will be there, and she is. They have a history together. Also, there is a man Danielle has had a secret relationship with. He has brought his wife and his ever-wailing baby. (“Who brings a baby to a shiva?” somebody says.) The wife runs three businesses, which causes more embarrassment for Danielle. Called “a babysitter” because that’s all she’s done so far. Her academic career is also not stellar and the subject of many questions from the chatty mourners. The film will make you laugh and occasionally cringe with recognition. (Streaming from VIFF Connect and VOD at Telus, Shaw, Cineplex and more.) 4 out of 5

TINA: It has been showing since last Saturday, but new or not, I want to highlight it. There’s so much here that I didn’t know about Tina Turner. I didn’t read her book I,Tina, but I did see the movie about her, What’s Love Got To Do With It. And I did see her perform years ago when she was still with The Ike and Tina Turner Revue. This bio takes her all the way from a sharecropper’s daughter in Tennessee to a wife in Switzerland via the amazing career in between. And you get it with generous doses of her music.

She’s got a powerful voice and sexy moves at the microphone. She’s got friends like Oprah Winfrey, actor Angela Bassett and Rolling Stone writer Kurt Loder praising her. And a strong story to tell. In a new interview, she’s still plenty bitter about Ike Turner (“basic torture”), although she spent years hoping people would stop asking about him. The film documents her rise to self-respect, mega-stardom and her ultimate dream, being able to draw an audience big enough to fill a stadium. Buddhism and, ironically, Phil Spector showed her what she could do. Oscar-winning directors Dan Lindsay and T.J. Martin tell the story well in this HBO documentary. (Crave.) 4 out of 5

SUGAR DADDY: The title gives you the gist; the film shows the plentiful art in and around it. Plus a very strong performance by Vancouver’s Kelly McCormack, who not only stars in it, but also wrote it. Possibly shaped by her own experiences. She plays a young composer and player who is trying to break into the music business. She has no money, can’t pay the rent and has just been fired from a catering job. She finds a website where men seek young women to join them for restaurant dates and other events. No sex, she’s assured, and goes out with one, and then a second. He’s a warm, friendly businessman played by Colm Feore. He got a Canadian Screen Awards nomination this week for the role.

He encourages her, gives her a lead to an industry contact and after a few dates, gives her a big cheque to pay for music school. She’s been spending her money badly, can’t correct her ways herself and suffers from low self-esteem. All that comes across brilliantly in McCormack’s acting and in smooth direction by Wendy Morgan. In fact, most of the creative team are women. They capture real concerns and anxieties and Morgan, who has had a big career in music videos, illustrates them with dream-like sequences. They feel a bit too arty after a while, but they look good. There’s also a discussion about what dating a sugar daddy represents. “Sets women back 50 years,” a friend says. A vibrant argument follows; one of the best scenes in the sometimes emotional film. (Available on VOD platforms starting Tuesday.) 3½ out of 5

SHOPLIFTERS OF THE WORLD: Here’s another statement about the influence of music on young minds. Not like American Graffiti or Dazed & Confused; more direct, up-front, talking about what the music actually says. In this case, it’s by The Smiths, the British band often dismissed for mopey lyrics, but praised here for singing about martyrdom, meaningless death, deceit, heroism, catharsis. As one character puts it: “All the horrors you have to face up to.” When they broke up in 1987, teens were in shock. At least they were in Denver, Colo., as this movie portrays them. Four go out on an all-night carouse when they get the news. Cleo, Sheila, Patrick and Billy (on the eve of joining the army) party, smoke dope, slag Duran Duran and Molly Ringwald and go on at length about their ambitions (‘’I could leave tonight.”) and their fears (“I’m a full-time supermarket checkout queen. Safeway, here I come.”).

Meanwhile, Dean, a record store clerk, barges into the local radio station, points a gun at DJ Full Metal Mickey (Joe Manganiello) and has him play nothing but The Smiths. Twenty of their songs (the title is one of them) play on the soundtrack that accompanies the party-making binge. The film is in four chapters; each named with a song title. It’s a nice tribute to the band, breezy and resonant, but awfully serious. Director Stephen Kijak, with music documentaries in his resume, could have had more fun with it. (Rent or buy at the Cineplex store.) 3 out of 5