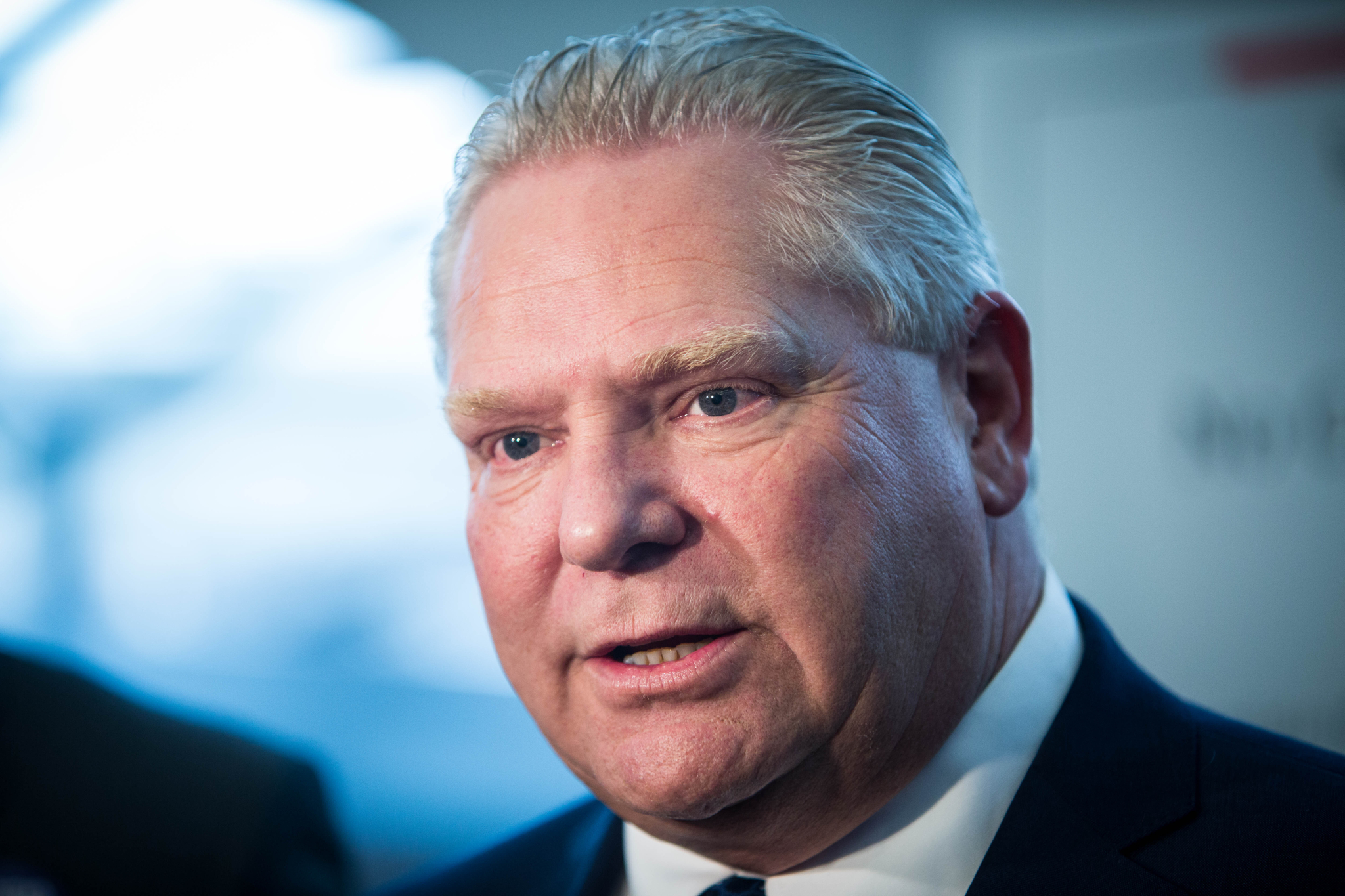 Progressive Conservative Party of Ontario leadership hopeful Doug Ford scrums with reporters in the Shaw Centre lobby after an interview on day three of the Manning Networking Conference 2018. Photo by Alex Tétreault
Previous story
Next story

When Doug Ford’s Progressive Conservatives formed government in 2018, one of their first acts was to install new signs along the province’s border proclaiming that it was “open for business.” But based on reporting from Canada's National Observer and Torstar into the connections between high-profile developers and a proposed new highway in the Greater Toronto Area, some of the people that funded his winning campaign already knew that.

This is of a piece for the Ford government, which has made conflicts of interest and favours for friends a key part of its governing brand. Whether it’s appointing family and friends to highly paid patronage gigs or changing the job description so that a personal pal can become the province’s top cop, the Ford government has already built up a rich history of low-grade grift. But this particular conflict far exceeds the scope of its other forays into the ethical grey zone, and could easily end up costing Ontarians far more than the others combined.

As the Observer/Torstar reporting shows, the eight major developers who stand to benefit most from the construction of Highway 413 have poured $753,000 into the PC Party’s coffers since 2014. They’ve also variously employed the head of the Ontario PC Party’s fundraising arm and the chair of Caroline Mulroney’s leadership campaign — the same Caroline Mulroney who, as Transportation Minister, will have a decisive influence on the fate of Highway 413.

Those developers stand to benefit handsomely from their political investment here, given that they own 39 properties adjacent or proximate to the proposed highway that cover 3,300 acres at a combined cost of approximately $450 million. But since more than half of those were purchased before 2004, they’re already worth far more than that — and that’s before introducing a new highway, which would massively increase their economic value. As former Ontario government planner Victor Doyle told the Observer/Torstar team, “the profit margins are astronomical.”

The proposed 60-kilometre route, which has an estimated cost of nearly $6 billion, would stretch northeast from Highway 401 around Brampton and towards Highway 400 north of Vaughan, and cut a swath right through some of the GTA’s most environmentally sensitive land — or what’s left of it. It would disrupt 220 wetlands and habitats of 10 species-at-risk, as well as razing 2,000 acres of farmland, cutting across 85 waterways and paving almost 400 acres of protected Greenbelt land in Vaughan. And while the Ford government claims it will reduce commutes by as much as half an hour, a study commissioned by the previous Liberal government — which scrapped the project — indicated it would save less than a minute.

That panel’s report, which has been removed from the Government of Ontario’s website, suggested that the province should take a more holistic look at the region’s transportation needs and how they can best be met. In the United States, that’s exactly what’s happening right now. As part of the Biden administration’s proposed $2 trillion infrastructure plan, Transportation Secretary Pete Buttigieg has been charged with changing the way a nation thinks about its highways.

“President Biden proposes to invest $20 billion in state and local safety initiatives, as well as shifting the bulk of roadway spending to maintaining existing roads rather than building new ones,” Forbes’s Carlton Reid wrote. “In effect, the White House has recognized the existence of induced demand, the theory that building more roads leads not to reduced congestion but increased levels of motoring.”

But in Ontario, where the government can’t even get the colour of its license plates right, the odds of it being able to understand something as complicated as induced demand are dangerously close to zero. Instead, it seems determined to plow ahead with yesterday’s solution to tomorrow’s problems, even in the face of growing opposition from communities that stand to be most directly impacted.

Local governments in Mississauga, Vaughan, Halton Hills, Halton Region, Orangeville, and Peel Region have all come out against the project, and even federal Conservative MP Michael Chong, who represents the riding of Wellington-Halton Hills, has registered his disapproval. So far, though, the Ford government hasn’t backed down from either the project or a proposed new regulation tabled last year that would “streamline” the existing environmental assessment process for Highway 413 and to allow construction on supporting infrastructure like new bridges before said assessment is even complete.

Now, it seems, it’s up to the federal government to save Ontario from the government it elected. Federal Environment Minister Jonathan Wilkinson can assert jurisdiction over the environmental assessment process and ensure factors beyond the financial interests of a small cabal of real-estate developers get heard.

"This is of a piece for the Ford government, which has made conflicts of interest and favours for friends a key part of its governing brand." @maxfawcett writes for @natobserver

Yes, the Ontario government will cry foul, and claim this is exactly the kind of federal overreach it warned about in the recent carbon tax case. But if this government is serious about climate change as it says it is, then it has to start making these sorts of hard decisions. After all, we know the Ford government won’t do it.