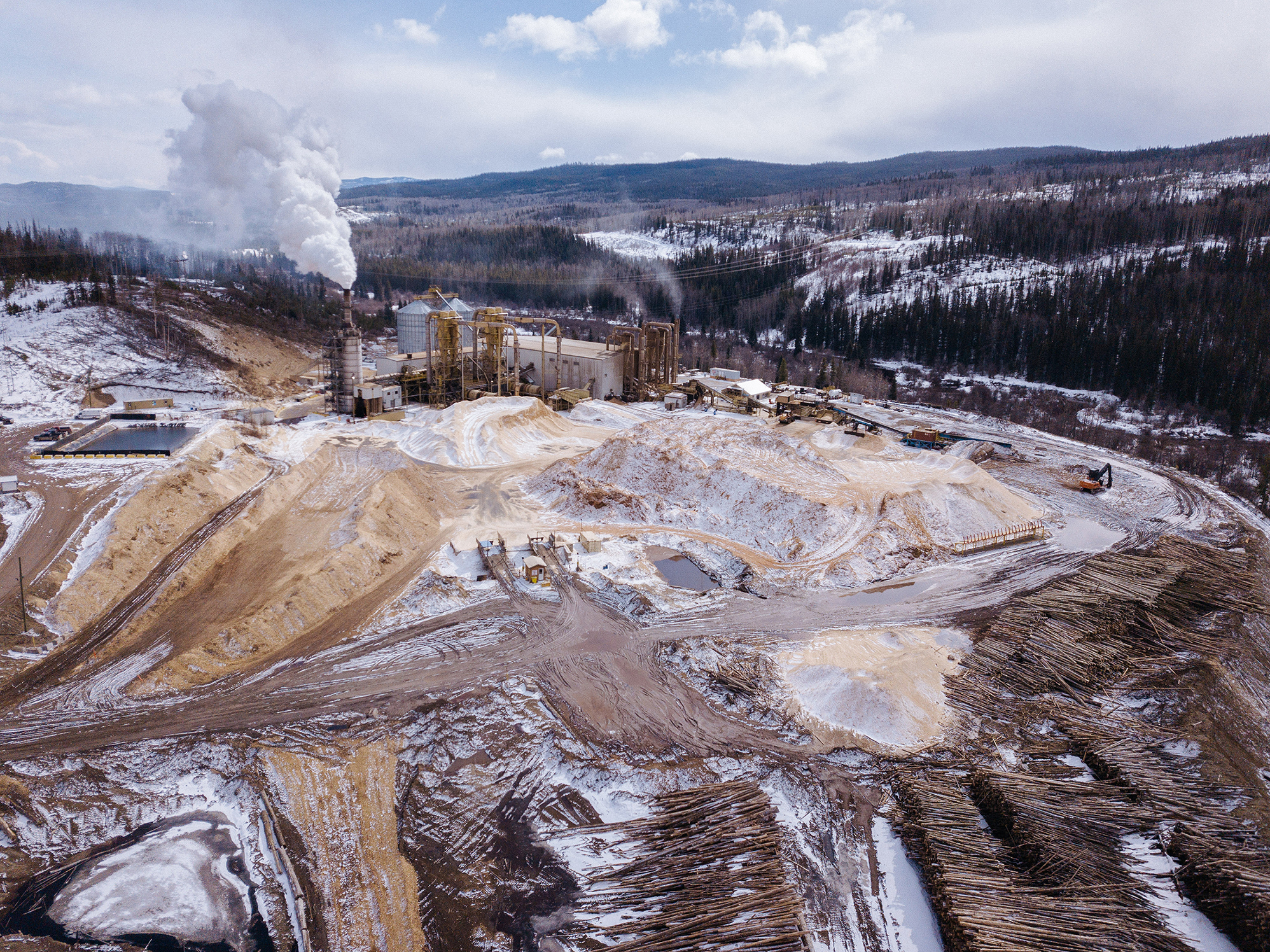 Whole logs stacked high in wood pellet mill yards across British Columbia aren’t supposed to be the norm, but new research shows it may be more common than the industry says.

The research also found that 12 per cent of logged material in the province is eventually broken down for the controversial biofuel.

Operations — often dubbed as "green" or "sustainable" — are meant to use residuals from the logging industry to create dense pellets, which are then burned to create energy.

However, photos obtained by the Canadian Centre for Policy Alternatives (CCPA) of yards in Smithers, Burns Lake and Houston show piles of whole logs ready to be compressed and broken down.

Coupled with new research from the centre, showing that large volumes of trees have been logged specifically for the wood pellet industry since 2010, industry workers and environmental groups are concerned. They’re asking that the government put a hold on new pellet mills until an independent review is done.

“It’s clear that there are very large amounts of logs that are ending up in these facilities, and the intention is to turn those logs directly into wood pellets, which is counter to the common narrative,” said Ben Parfitt, a policy analyst with the CCPA’s B.C. office and researcher for the study.

As to why people should care, Parfitt says there are a few reasons. Not only are the environmental implications severe, but the industry produces few jobs. Just over 300 people work in the pellet industry in the province, scattered across 14 mills — a half a per cent of the total number of forestry workers.

Gary Fiege, president of the Public and Private Workers of Canada, which represents workers in the sector, echoed Parfitt’s concerns around the industry’s actions.

“We need to push the pause button on pellet mills until we figure out where the trees logged in B.C. are going,” says Gary Fiege, president of the Public and Private Workers of Canada. #BC #Forestry #Logging #Environment

“We need to push the pause button on pellet mills until we figure out where the trees logged in B.C. are going. Twenty years ago, 91,000 people worked in our forest industry. Today, it’s less than 49,000,” said Fiege.

“We desperately need to make higher-value forest products and generate far more jobs from each tree we log. There’s a place for pellet mills in B.C., but at the end of the line, not the beginning.”

That line continues to blur, says Parfitt, with U.K. company Drax set to control half the existing pellet mills in B.C. with its planned takeover of Pinnacle Renewable Energy. Pinnacle calls itself “one of the world's leading manufacturers and distributors of industrial wood pellets, which are used by large-scale thermal power generators as a greener alternative to produce reliable baseload renewable power.”

The CCPA data shows Pinnacle led the removal of at least 1.3 million cubic metres of logs from the province since 2010.

“It is exceedingly clear that major thermal electricity producers like Drax in the U.K., have no hope of meeting their wood requirements from the United Kingdom's forests. It’s a non-starter, there's not enough wood in those forests to sustain their operations,” he said.

“... And there's a very green veneer being put on all of this power production.”

That fits into a larger and concerning narrative, says Parfitt — that the carbon emitted during burning the pellets is offset by the carbon stored in freshly planted trees. He says those worries are known and growing.

The CCPA research is timely — a wood pellet operation is being proposed in Fort Nelson, where two mills shut down in 2008, laying off hundreds of people. The forest industry has had little activity in the area since and the mill would be welcomed by many in the area, including the Fort Nelson First Nation, which has voiced its support.

However, the CCPA, Public and Private Workers of Canada, Conservation North and Stand.earth are all calling for an independent review of the wood pellet industry before the Fort Nelson mill goes through — an operation the CCPA says would require around 1.5 million trees.

Parfitt says the ask for a review is in line with what B.C.’s Forests Minister Katrine Conroy has been tasked to do by Premier John Horgan: Protect old-growth forests and enact policies to move the industry to higher-value production.

“I think there's a recognition that, both from a jobs perspective and a forest health perspective, if we start going down the road of logging trees directly to support the manufacturing of a product that is then burned, we're not doing our economy or our climate any favours,” he said.

“In fact, we’re harming both.”

Uncertainty in the logging industry as mills close down

BC has entered the era of extreme old-growth logging. We must stop it.

Turning trees into electricity is way less "sustainable" than using photovoltaic solar. If you don't have the land for the PV array, or the money for the batteries, you'd be better off environmentally burning natural gas and leaving the forests alone to offset the GHG emissions...

It is not possible to grow enough biofuel to replace fossil fuels. Period.

Where does it say that most

Where does it say that most of this supply is beetle-killed timber? Like, remember the Mountain Pine Beetle outbreak? Killed vast areas of low-value lodgepole pine the size of Vancouver Island. Never heard of the concurrent Spruce Bark Beetle infestation? Well, it’s a little less visible because every, single tree isn’t killed like it is in pine stands which, BTW, are usually single-aged, pure pine stands. But, the point is: there are vast areas of dead pine (and to a lesser extent, dead spruce) in BC’s Interior. Vast areas, let me repeat.

Wood pellets are definitely a low-value, low-job-producing product. That’s because dead pine is almost worthless for pulp immediately when the tree is killed (in the year it was attacked by beetles)—the beetles inoculate their egg galleries with a fungus which the larva then consume, but it also stains the wood dark blue. Pine is not a preferred pulp species, anyway, because of its high pitch content, but the blue stain puts it beyond feasible. Lodgepole is almost worthless even green and healthy.

Furthermore, there’s about a two-year window to harvest and get beetle-killed pine to the sawmill before it degrades to an infeasible state. At best the species is low-value (hard, knotty, pitchy) as lumber, and attempts to market “denim pine” (so-called because of the blue stain) have been disappointing. The byproduct sawdust and tailings are, naturally, blue-stained as well, so they can’t profitably be sold on to pulp mills.

A couple of decades past the big pine beetle outbreak, the remaining kill is very low quality —extremely low. That’s why attempts to refine the resource to wood-gas fuels have been tried. But it’s just one—but expensive— step beyond manufacturing pellets for burning in wood stoves and furnaces.

Locals have been hit with resource-industry decline. If they can make a buck mopping this beetle-kill up, it’s not a bad thing. Post beetle-kill, forest managers realize that allowing vast areas of lodgepole pine to grow—even protecting it from wildfire—but, at the same time, not harvesting it (because licensees don’t really want it)—inevitably developed into a dangerous situation: single-aged stands at the age when beetles like them the most (80–100 years) risks huge insect outbreaks; lodgepole is very pitchy and inflammable; vast areas of pine, whether killed or not, is a greater wildfire risk that multiaged, patchwork stands of different species. In short: it’s just not good to let huge areas of lodgepole get to maturity. Before we started putting wildfires out, no vast areas of lodgepole ever developed. But, before we get back to that, there’s a lot to attend to—including the liquidation of too-contiguous stands of lodgepole.

Conflating the activity with Coastal Old Growth preservation is disingenuous.

The air pollution argument is blunted by the fact that, if this beetle-kill (and decadent, living stands of pine, such that remain) is consumed in wildfire—in which dead trees are a significant hazard—more CO2 will end up in the atmosphere than if the hazard is abated by harvesting (lowering wildfire risk/ hazard) and the wood burned efficiently in furnaces so designed.

The lodgepole pine story is a long, convoluted tale of mismanagement and disaster. Attempts to preempt the beetles failed miserably, and efforts to salvage at least some value from the already low-value species has been marginally successful at preserving jobs in old, outdated sawmills (indeed, the huge dust explosion that burned down the Babine Mill—I think it was—was caused by the pall of pitch crystals mixed with the sawdust from dead pine trees. There were fatalities). The ministry has a duty to provide work from its resource, to salvage what it can, and abate the fire hazard of dead, beetle-killed wood and over-mature lodgepole pine. No “old growth” here: lodgepole reaches the decadent phase in only 120 years.

Pushing the “pause button” on pellet licenses simply because concerned urbanites down on the Southwest Coast have just found out about it would be a dubious policy. There’s a timeliness factor that involves reducing wildfire hazard and preparing to battle new insect and wildfire emergencies that global warming will surely present.