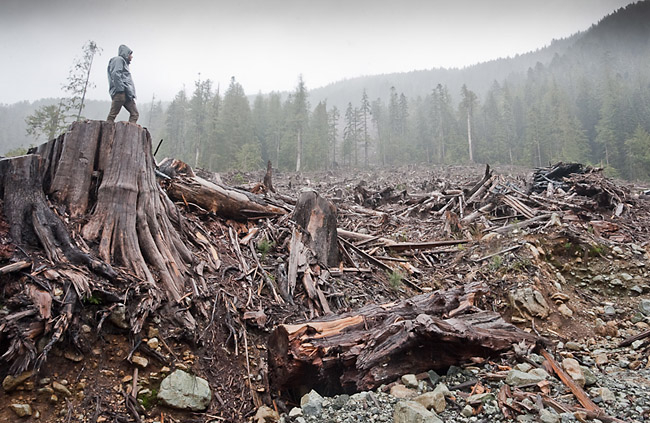 B.C.'s forests have more to them than the trees — a value that's largely lost when the woods are clearcut, advocates say. Photo by TJ Watt/Wikimedia Commons
Previous story
Next story

Forests have historically been valued on an industrial scale, managed to maximize the amount of timber cut. But when they aren’t clearcut, they also offer other valuable resources that advocates say should be recognized as well.

“(We need) to change forest values so that we stop looking at the forest just for the trees,” said Shelby Leslie, CEO of Forest Foods Ltd., a non-timber forest resource company that supports First Nations wanting to enter the industry. “We (need to) start incorporating the understory, start incorporating food production, (and) look at biodiversity from an … ecological point of view to really sustain us.”

Forestry is huge in B.C., with lumber, pulp and paper, log exports and wood pellet production worth almost $30 billion combined in 2018. That year, about 67 million square metres of timber, the equivalent of millions of trees, was hauled out of the mountains on snaking forest service roads.

And old-growth forests aren’t the only concern, Leslie said. The province’s forest management policies have prioritized industrial logging where forests are clearcut and then replanted with uniform plantations slated to grow for several decades before being clearcut once again for the cycle to repeat. It’s a cycle embedded in the province’s forestry management legislation, the Forest and Range Practices Act (FRPA).

The ministry was not available for comment during the writ period.

“I spent almost 20 years in reforestation. You become normalized to the scars on the landscape that are clearcuts,” Leslie said. “You work in a biological and ecological desert.”

Ferns, berries, other tree species and complex webs of mycorrhizae and bacteria are essential to the ecosystems of old-growth, and older second-growth, forests. Clearcuts, unlike more selective logging practices, destroy this complex ecosystem that develops in the understory and soil over decades. And rapidly replanting those forests with uniform stands of the same tree species is equally problematic, he said, because the new plantations are too dense and homogenous to support similar understory ecosystems.

“There are forests (in replanted areas), but you could hardly call them forests because they don’t support (much) biodiversity, whether it’s mammalian, or botanicals, or fungi,” Leslie said.

#Forests have historically been valued on an industrial scale, managed to maximize the amount of timber cut. But when they aren’t #clearcut, they also offer other valuable resources that advocates say should be recognized as well. #ntfp

And that includes wild mushrooms and other non-timber forest products — except for morels, which grow in recently burnt forests. The most important commercial species of wild mushrooms depends on older, diverse forest ecosystems to thrive.

Chanterelles, which between 1995 and 2005 were worth an estimated $3.5 million annually in exports to Europe alone, do best in stands of Douglas fir between 40 and 80 years old. They prefer open, mossy understories and shade. Pine mushrooms require similar conditions, if a bit brighter, in forests of fir, hemlock and spruce that are at least 60 years old. Between 2000 and 2003, thousands of pounds of these mushrooms were sent to Japan to the tune of roughly $20 million annually.

Even clearcuts can be better managed to support the regrowth of a biodiverse ecosystem.

“There’s an opportunity for agro-forestry within those clearcuts to try, when you’re bringing back (the forest), to mimic an actual stand structure that could support that biodiversity,” Leslie said.

For instance, huckleberries thrive in the open, sunny habitat created by clearcuts. And until recent closures to protect grizzly bears’ food sources, the huckleberry harvest in the Kootenay Boundary region was estimated to be worth between $91,000 and $685,000. A similar industry in the U.S. Pacific Northwest is estimated to be worth more than $1.6 million a year.

Despite the strong sales, the non-timber related industries remain largely underground. The provincial Ministry of Forests, Lands, Natural Resource Operations and Rural Development is responsible for managing forestry on provincial Crown land — about 94 per cent of the province. It does not monitor non-timber forest resources nor include them in its forest management plans.

That oversight is a missed opportunity, said William Nikolakis, a lawyer specializing in Aboriginal and natural resource law and professor at UBC.

“There’s economic loss (in industrial forestry because) we’re getting the lowest economic return we can from it,” he said. And even if the industry is worth more overall, a closer look at who actually benefits from the profits of industrial logging compared to the non-timber forest resources shows a more complex picture.

“A lot of that revenue (from industrial forestry) gets dissipated and doesn’t end up in (rural B.C. and First Nation) communities,” he said, largely because in industrial logging, clearcuts will drive brief bursts of local economic activity as the forests are logged, followed by decades of stagnation as they recover.

The problem has been exacerbated by multinational pulp and paper and lumber companies which drive up industrial logging in the province and move sawmills and paper factories outside the region, Nikolakis explained. Several of the province’s mills have closed in recent years, leaving many in rural B.C. without jobs. In contrast, resources like mushrooms and berries come back every year with appropriate management, providing more stable incomes for the people picking them.

“That raises fundamental questions about the economic returns from industrial forestry and how these add up over the long term compared to non-timber forest (resources),” he said.

It’s an economic model many First Nations have challenged, both through protests and in the courts, as they seek to assert title and rights, he said. Some have started to manage their lands for a broader diversity of uses, which include mushroom and berry harvesting, and logging. For instance, the Tsilhqot’in Nation, with which he has worked, has been particularly active in developing forest management plans for its title land that include non-timber resources.

Nor is a deeper questioning of who benefits most from the province’s current management system limited to First Nations. Community forests in the province have pioneered more holistic management regimes and equitable distributions of benefits — but they only comprise a tiny proportion of logging tenures.

Changing those areas, the bulk of B.C.’s landmass, to be more biodiverse and support a more complex forest-based economy will take transforming provincial forestry legislation — a “wholesale change.”

“And that’s not easy,” Leslie said.

Capitalism's economics have always failed to do the "deep accounting" required for a sustainable planet.

The profession of Accounting is urgently in need of an overhaul of its methodologies, and obligations.

Our human civilization is in equal need of a reckoning with our impact on Earth and a paradigm shift in what the fact of being human means. Preferably before we consume ourselves to extinction.