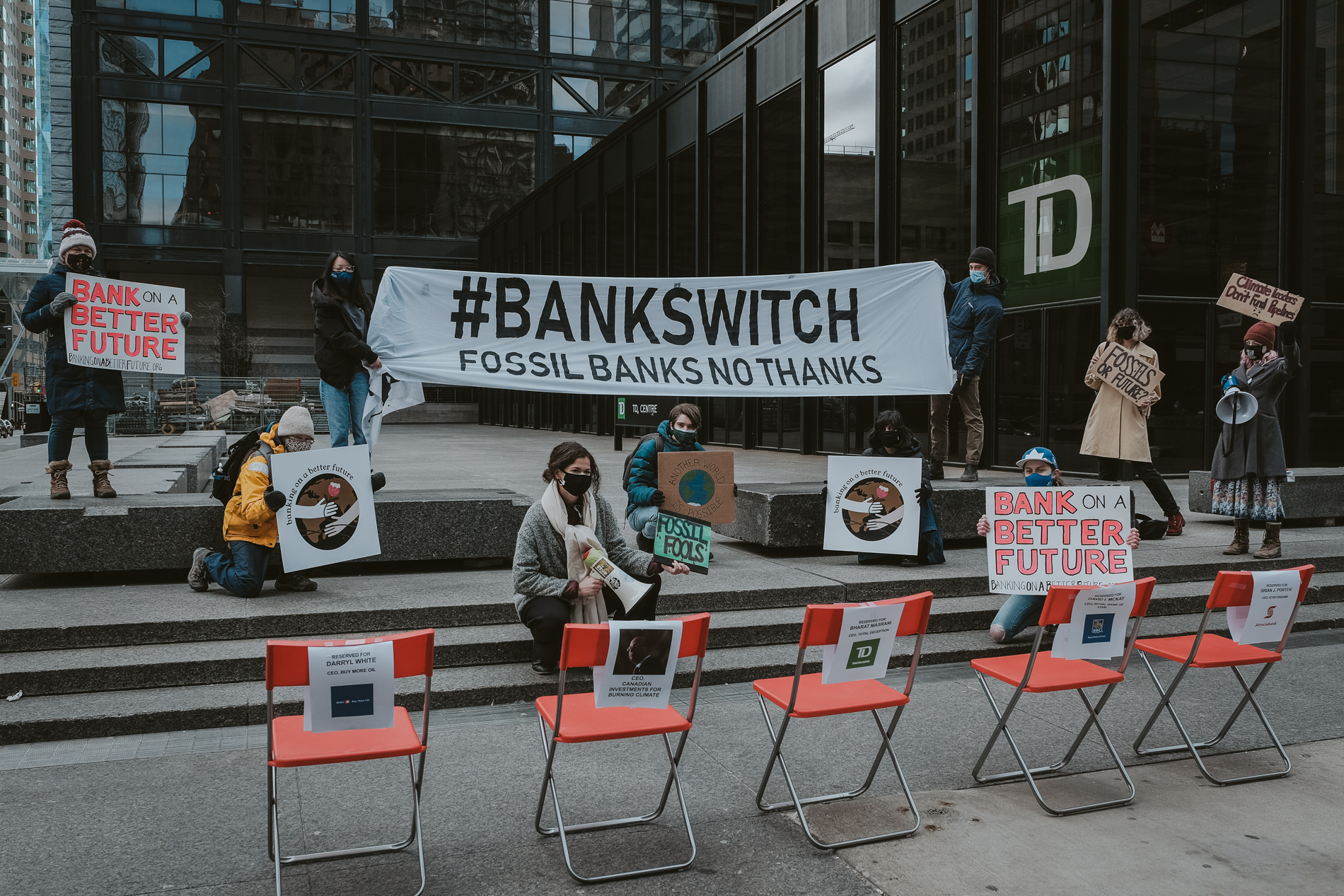 Organizers from the Banking on a Better Future campaign in front of a TD bank location in Toronto on April 1. Photo by Joshua Best
Previous story
Next story

At these meetings, shareholders and executives will come together to discuss the banks’ long-term strategy and shareholder interests. Given the rapidly escalating climate crisis, it comes as little surprise that some shareholders have proposed a resolution urging RBC to implement time-bound greenhouse gas reduction targets.

Among Canada’s Big Five banks, RBC is the worst climate offender. The bank has financing ties to several controversial fossil fuel projects, including Enbridge’s Line 3 pipeline. Once in operation, this pipeline will have a climate impact equivalent to 50 coal-fired power plants. Further, Line 3 violates Anishinaabe land and treaty rights, and it will cross over 800 waterways, threatening water and life across the continent.

It’s just one of many such projects. According to a recent report by the Rainforest Action Network, RBC is the fifth largest funder of fossil fuel projects (and the No. 1 funder of tarsands oil) in the world, having poured US$160 billion into fossil fuel financing since the Paris climate agreement was signed in 2016.

RBC’s ties to extraction, the tarsands and climate destruction are hard to square with CEO David McKay’s claim in the company’s Climate Blueprint report that‬ “climate change is one of the most pressing issues of our age.”

As a college student set to graduate this year, I’m trying to figure this out: How should I interpret a statement like this coming from a man who, according to the most recent proxy circular, made more than $12 million in 2020 leading a business that bankrolls hundreds of billions worth of climate-killing fossil fuel projects? What does this statement mean to Indigenous communities if it isn’t backed by meaningful action from RBC’s largest shareholders? What does it mean to those in the Global South who are already facing the consequences of climate change? What does this mean for young people globally, our children and their children — the people who will have to confront the most detrimental consequences that will emerge from today’s inaction? ‬‬

As a young person, the decisions banks are making today will impact my life for decades. I’ll witness the fallout that will affect my communities, neighbours and friends and the generations after me — fallout that could have been avoided if certain decisions had not been made, decisions like RBC’s choice to finance fossil fuel extraction when a livable future demands rapid wind-down of global production.

Young people around the world are rallying to signal the end of the fossil fuel era and make clear that our generation will not indulge in practices that violate land, water, human rights and Indigenous sovereignty. Last week, youth organizers from Climate Strike Canada and Divest Canada launched Banking on a Better Future, a youth-led campaign inviting young people to move their money away from the Big Five Canadian banks (all of which are among the top global financiers of fossil fuels) to credit unions that confirm with us they do not lend to fossil fuels and have genuine respect for the voices of young people and their members.

Of the young people I know, most bank where their parents bank without considering other options. And once established at a bank, few people ever switch. Between 2009 and 2014, only four million Canadians switched financial institutions, and recent U.S. data reflects this reluctance. Banks are counting on that continuing. But we have the power to decide who we will place our trust in to handle our money.

Through our pledge, we are sending the banks a clear message that they cannot count on us as customers if we cannot count on them to fund a livable future. We are a growing movement of youth ready to push back against these unsustainable financial mindsets. We cannot afford to rely on extraction to sustain our economies any longer.

"We are sending the banks a clear message that they cannot count on us as customers if we cannot count on them to fund a livable future," writes Evelyn Austin of @DivestCanada. #DivestFromThePast #ClimateCrisis #FossilBanks

I regret to report that RBC

I regret to report that RBC is my Bank and their stubborn support of fossil fuel is not their only transgression I fear. A few years ago it was reported that they were one of Canada's worst offenders in laundering dubious money - so much so that the American government called them out. RBC leadership leaves a lot to be desired. I perhaps wouldn't be so disgusted if they were sharing their ill-gotten gains through the interest rates they paid on deposits but no, interest has not yet dipped into the negative column - but is not far from it!.
My cynicism is of long standing and I stay with them because it is too much trouble to switch. For a while I was a credit union member. I now live in a location ill served by the credit union system.

My Financial advisor is affiliated with RBC and for some time I have been nagging to switch some of my paltry investments to "Green" instruments. Finding some that meet with her approval is turning out to be difficult. Quite a bit of my pitiful "estate" is invested in RBC funds. Perhaps I am going to have to divest myself from them too.

Or people could just move

Or people could just move their money from banks to credit unions because banks are evil and despicable in a host of ways, financing climate destruction being just one. Whereas credit unions, pretty much aren't. Which reminds me, it's voting time at my credit union--I should go see who looks good for board of directors.

Absolutely right, Rufus. Moving to a credit union and its associated "wealth management" investment advisors is the easiest effective thing to do. Now at 70+ years old, my wife and I have been there that for decades and have also used more aggressively "ethical" investment advisors (especially in UK, where they have been way ahead of Canada). It has kept our investments pretty clean, and they have always prospered as well as anybody's.

I believe that the person who

I believe that the person who was quoted is not saying that it is the bank's purpose to oppose climate change; but, rather that it is a challenge to make a profit in an environment which includes climate change. He does use the words 'community' and 'thrive' but doesn't describe what he means by these words. I think that he is cynically speaking from both sides of his mouth.

For those in Toronto,

For those in Toronto, Toronto350 has put together a roundup of local credit unions and their climate actions/positions: https://www.toronto350.org/choosing_a_climate_friendly_credit_union_in_t...