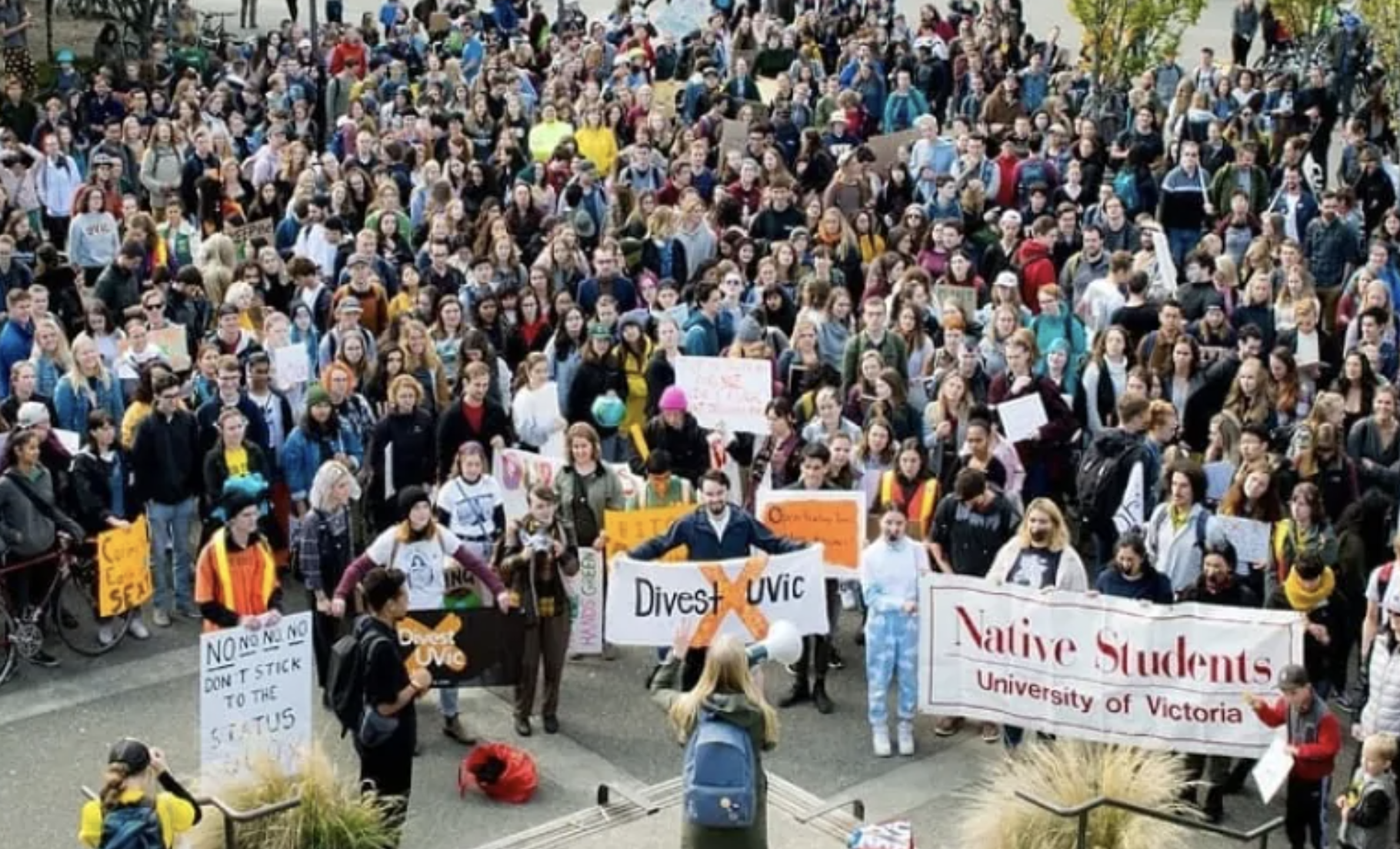 The University of Victoria’s recent announcement pledging to put $80 million towards fossil-free investments was a success story for student activists, who have been urging their universities and colleges across the globe to divest from fossil fuel investments and switch gears to more environmentally conscious alternatives.

But despite the victory, student divestment groups across Canadian universities say their administrations are not taking them seriously and that they have struggled to get their message across.

“A real key to Divest UVic’s success is that we have a great working relationship with our faculty association,” she says. “We’ve done joint letters to the administration in the past, and we also pushed them to run a referendum amongst faculty, which had 77 per cent in favour (of divestment). Faculty support is key.”

Elara Neath-Thomin from Divest McGill has had similar experiences, saying student movements like this often have student and faculty support but struggle with their administration.

According to Divest McGill, the university’s Committee to Advise on Matters of Social Responsibility (CAMSR) has rejected the motion to divest from fossil fuels twice. In 2019, CAMSR noted that “not all fossil fuel companies are uniform in their approach to climate change.”

“McGill’s decision was to refuse divestment but propose a plan for decarbonization in its endowment portfolio with benchmarks that exclude the impact of the fossil fuel industry,” says Neath-Thomin.

This raises another common obstacle faced by student divestment groups: some view the techniques used by university administrations as greenwashing.

Despite the recent success of some university #divestment efforts, students urging their schools to divest from fossil fuels say administrators need to pay closer attention to their demands.

“That choice, to choose decarbonization, they are using as a way to move the conversation away from divestment,” Neath-Thomin says. “This was widely perceived by our group as a form of greenwashing.”

McGill University says its efforts to reduce the school's carbon footprint stand to be more beneficial than divestment measures.

"The university has taken an innovative approach by which we are not only looking at the energy sector, but also at influencing companies in other sectors to become more efficient," media relations officer Shirley Cardenas said in a statement to Canada's National Observer.

"We believe that focusing on reducing the overall carbon footprint will yield greater benefits than eliminating a few holdings in the Top 200 Carbon Underground reserve holders’ list, which represents currently less than one per cent of the McGill investment pool."

For some divestment groups, membership has continued to grow, even as they struggle to gain the attention of university administrators.

“There’s been a lot of student support,” says Rivka Goetz, who is part of a University of Toronto group called Leap U of T, The Student Voice on Environmental Justice. “Even this year in a pandemic, we’ve been able to find new members, which is great, but it's always a challenge to get through to any of the governing council or the president’s office, really any of the governing bodies that have decision-making powers at U of T.”

The Leap Manifesto, which the group supports, is a controversial idea embraced by certain elements within the New Democratic movement. It has been met with opposition even within the NDP and calls for a revamp of what it calls Canada’s capitalist economy, seeking to wean the country quickly off fossil fuels, including a call for no new pipelines. The manifesto also calls for a “shift swiftly away from fossil fuels so that Canada gets 100 per cent of its electricity from renewable resources within 20 years and is entirely weaned off fossil fuels by 2050.”

“It’s been an uphill struggle, especially since 2016 when (U of T) president Meric Gertler published his response to our advisory committee, saying that he did not want to divest,” says Goetz. “U of T has engaged in a lot of what we call greenwashing tactics since then, taking other less effective approaches to the climate crisis.”

The University of Toronto rejects the greenwashing label.

"We strongly disagree with this characterization," a spokesperson wrote in an emailed statement to National Observer.

"Immediate divestment from fossil fuels has been an area of much thought, research, and analysis for the university administration, which provides direction to University of Toronto Asset Management in how it manages the university’s investments. We are determined to maximize the impact of our actions on climate change. This has led to an approach that focuses on the greenhouse gas emitting behaviour of actors from all sectors of the economy.

U of T’s Mississauga campus recently announced the launch of a 10-year sustainability plan surrounding other climate change-related policies, including goals like “making steady progress on its commitment to reduce the carbon footprint of its investments while contributing to the broader fight against climate change through research, teaching and sustainable operations.” The university also promised a strategic sustainability plan, which includes 26 short- and long-term goals, according to its 2017 academic plan.

Universities are pushing back

Marc Lee, a senior economist with the left-leaning Canadian Centre for Policy Alternatives and co-author of a study outlining how the Leap Manifesto could be funded, says it’s unsurprising that administrations are resistant to student divestment groups, as there is often defensiveness at institutional levels to making change.

Lee says universities often use fiduciary responsibility as a shield to rebuff divestment advocates. He says student groups should focus on bringing economic arguments for divestment to their universities’ attention rather than solely relying on moral arguments, as institutions are often more receptive to economic facts due to the money at stake.

Lee says it's also important for student groups to celebrate “small successes,” such as Divest UVic, because they are big wins that could push universities to completely abandon fossil fuel investments.

Marc Lee on the impact of youth divestment movements

“Typically, a portfolio is going to be invested in all kinds of different things, of which fossil fuels will be some smaller percentage. It's not a particularly large area that you would need to divest in order to achieve that,” says Lee.

Lee says the next steps of the divestment movement at large will likely be focusing on companies that rely on fossil fuels, not just those that provide them.

Fossil Free: Divestment has created a comprehensive list detailing institutions across the globe that have divested, fully or partially. It also provides a classification for different kinds of divesting, including full commitments, partial commitments and divestments from coal and “tarsands.”

Erin Knight, a member of Fossil Free Lakehead, in Thunder Bay, Ont., says being taken seriously by administration has been a common struggle for university divestment groups, including her own, but encourages students to keep pushing for change.

“It’s been hit-and-miss with the board of governors and administration because at face value, Lakehead University has a really progressive president and there’s a couple of members of the board who have expressed off the record that they’re supportive of our initiative, but when it comes down to the red tape and the bureaucratic rigmarole, they throw up a lot of hurdles.”

Knight says university administrations must be urged to practice transparency and an open dialogue with students.

“It took us months just to get an appointment in front of one committee, and after that, we’d be petitioning another three months for another time,” says Knight.

In 2020, Lakehead University’s board of governors announced a plan to divest from fossil fuel holdings. Knight says other university divestment groups should keep pushing their administrations if they want to see change.

“Once you get your foot in the door, it's hard for them to say no,” she says. “There’s a lot of administrative nonsense to deal with.”

Among the funds being targeted by student activists are university endowment funds and pension funds. Amid the struggles to be taken seriously, some Canadian university divestment groups have decided to be strategic about pursuing the divestment of certain funds rather than pushing for a less likely full divestment. One subject of controversy has been divestment involving pension funds, which could impact university faculty and administration pension plans.

Samuel Taylor, administrative lead of Climate Action Carleton, says his group has strategically targeted the school’s endowment fund and hasn’t yet begun to push for the pension fund’s divestment.

“When we first went from zero and tried to actually look into dealing with something, the endowment fund was the obvious answer because it's much bigger,” Taylor says. “The information about it is public, people know how big it is, and it's the central fund of the university, and so it's the one that we first targeted.”

But fossil fuel companies still make money, with many attempting to pivot to more sustainable practices, while some cleantech investments may not be as lucrative.

Richard Masson, an executive fellow at the University of Calgary’s School of Public Policy, who supports the fossil fuel industry, says divestment could one day be feasible for Canadian universities, but it’s important for students to recognize how complex the subject is, and that there isn’t a simple solution.

Masson says while people may “feel good” about divesting, full divestment will result in having no influence in decisions surrounding this segment of the economy moving forward.

“The question becomes, are you best placed to use your financial influence to work with the companies who are trying to reduce the carbon footprint of that energy? Or do you want to just sell out and let others be involved in what's going to happen with the industry going forward?” says Masson. “This is one of the big elements of the divisions.

“Students like to be involved, and I think that's great,” says Masson. “These are very complex questions, which certainly should be debated.”

Masson says it’s important to remember that change is happening, but it will take time.

Even with its recent win, Divest UVic is vowing to fight on, as is the cross-country fossil fuel divestment movement across Canadian universities. Lowan, of Divest UVic, advises other university divestment groups to focus on becoming an officially recognized campaign instead of just a student-run club. She says this gives groups access to more resources, including potential university funding. According to Lowan and the Divest Canada Coalition, UVic is the only known university divestment group with access to direct funding and resources under its student union.

Editor's note: This piece was clarified to make it clear that UVic is the only known university divestment group with direct funding. The clarification takes into account other divestment groups that receive non-monetary support.

On average, I respect the

On average, I respect the idea that issues are complicated. But on climate change issues, a whole lot of the "nuance" or "complication" around any given thing is generally just a smokescreen for "we don't want to change".
Take that one guy saying basically "we shouldn't have to because it's less than 1 per cent of our fund"--well if it's less than one per cent, that makes it easy! Divesting would represent basically zero impact on profitability of the fund. Dump it, claim victory and move forward, sheesh!