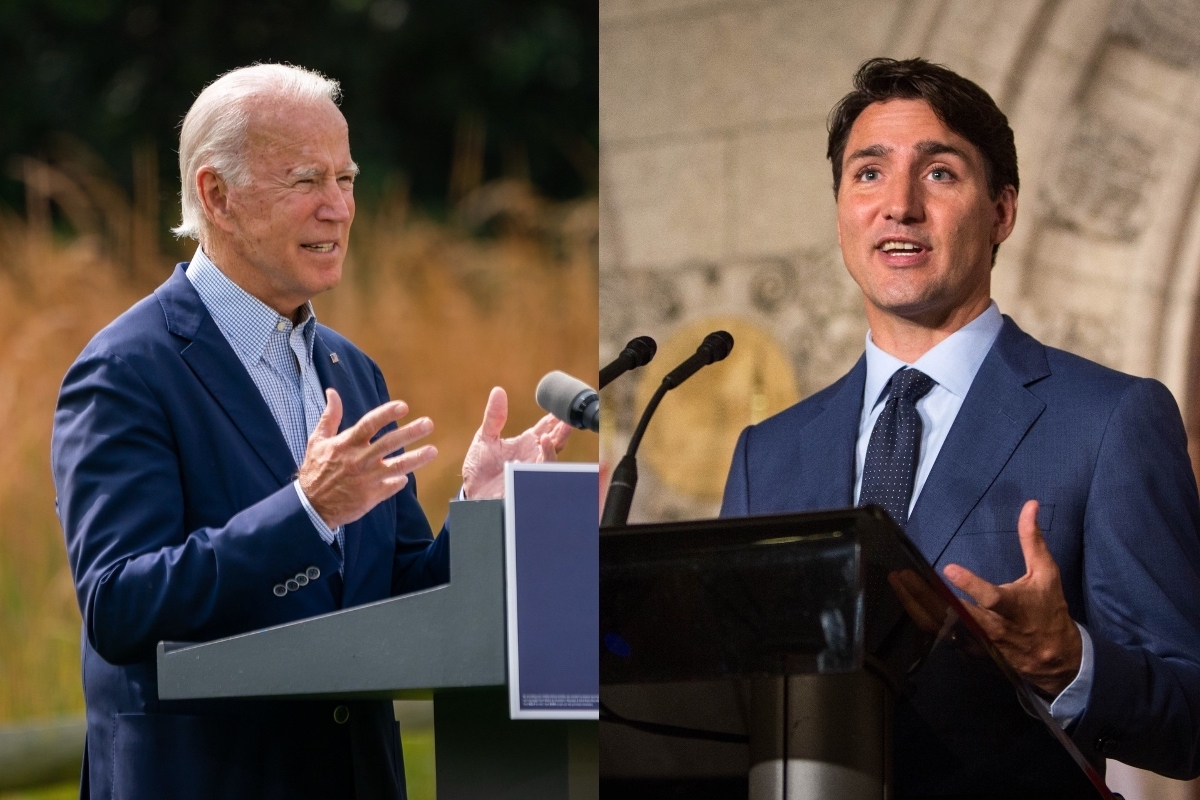 Next week, U.S. President Joe Biden will be hosting a climate summit, to which he has invited 40 world leaders, including Prime Minister Justin Trudeau. My, how the tables have turned.

Seven years ago, Trudeau was the golden new arrival on the global scene, an embodiment of hope at home and abroad, particularly with respect to the defining challenge of our time — the climate emergency. In the Trump era, Trudeau seemed a beacon of climate sanity and action (at least in the North American context). But today, the U.S. is catapulting ahead of Canada, with Biden seizing the mantle of exciting climate leadership, while Trudeau’s record appears lacklustre and tepid in comparison.

We should all feel gratitude for what the Biden administration is doing on climate (frankly, in the early days of the U.S. primaries, I never would have expected this). On the spending side, in particular, Biden is showing us what it looks like to meet this crisis. He is also laying bare the degree to which the Trudeau government is falling short.

In the course of my climate research, I’ve developed four markers that signal when a government has shifted into emergency mode:

Sadly, when it comes to the climate emergency, the Trudeau government is 0 for 4 on hitting these markers. Biden, on the other hand, is starting to hit all four. Let’s compare the two leaders.

Spend what it takes to win

Within three months of taking office, Biden unveiled spending plans to tackle the climate crisis unlike anything we have ever seen. Rather than letting COVID derail the imperative for climate action, Biden has centred a bold climate agenda in his administration’s pandemic economic recovery program, dubbed the American Jobs Plan. “This is the moment to reimagine and rebuild a new economy,” the plan declares. While the plan represents an overall infrastructure program of epic proportions — US$2.25 trillion over 10 years — a huge share of the spending is directly related to investments that will hasten the transition off fossil fuels.

In his Pittsburgh speech unveiling the plan, Biden declared, “It’s not a plan that tinkers around the edges. It’s a once-in-a-generation investment in America — unlike anything we’ve seen or done since we built the Interstate Highway System, and the space race decades ago. In fact, it’s the largest American investment in jobs since World War 2.”

There is also a remarkable environmental justice dimension to the Biden plan. Fully 40 per cent of climate and clean infrastructure investments are to be directed to disadvantaged communities. The Biden plan also includes huge investments in social infrastructure — housing, schools, child care, elder care. In all but name, the plan is a historic down-payment on a Green New Deal.

It’s still not close to enough, as American Green New Deal advocates like Congresswoman Alexandria Ocasio-Cortez and the Sunrise Movement were quick to point out. And much of this still needs to get through Congress.

Nevertheless, climate spending by the Trudeau government pales in comparison. By my rough calculation, the Biden climate investments — annualized, divided by 10 to account for Canada’s relatively smaller economy and converted to Canadian dollars — amount to about $25 billion a year. Our federal government, however, is currently planning to spend only about $5 billion a year on climate-related infrastructure and programs.* Hopefully, next week’s federal budget will significantly ramp that up, but the signals are not promising.

That means the Trudeau government isn’t merely spending a little less than it should in the face of the climate emergency. It is spending less by a massive order of magnitude.

Biden’s climate moves go well beyond spending. He’s launching a New Deal-inspired Civilian Climate Corps (a modern reboot of the Civilian Conservation Corps created by President Roosevelt in the Great Depression). Biden is intent on creating a domestic supply chain for the manufacturing of EV batteries.

The president isn’t relying on just the carrots of government investment. The climate emergency also requires sticks — clear, near-term dates by which certain changes will be mandated. That’s coming, too, with promised new vehicle standards and a commitment to ensure the entire U.S. electrical grid is carbon-free by 2035. (Canada is aiming to phase out coal-powered electricity by 2030, but much of the new supply is coming from gas, another fossil fuel.)

Some form of carbon pricing will likely be part of Biden’s plan. But unlike Canada’s federal plan, it is not the centrepiece of Biden’s strategy (it is more of a side story). And that’s good. It’s basically impossible to get people excited about carbon pricing. At best, we reluctantly accept it. What Biden is proposing is compelling.

Nothing about the Trudeau government’s approach to the climate crisis looks or sounds urgent, and none of it feels like a grand collective undertaking.

Biden, in stark contrast, is communicating emergency and generational opportunity. He’s making hundreds of new appointments to lead a cross-government transformation centred on the climate emergency. His domestic climate czar, Gina McCarthy, is a particularly inspiring choice — in every interview she gives, she communicates like someone with deep policy knowledge who is seized with the task at hand. Biden’s first wave of executive orders centred on rising to the climate challenge, framed around jobs and equity (the full, and inspiring, January 2021 climate executive orders can be found here).

And, unlike our prime minister (and premiers), Biden is telling the truth — he talks about the climate crisis as “the existential threat of our time,” positioning it as a core national security issue. He has cancelled the Keystone XL pipeline project and is halting new fossil fuel projects on public lands (although, sadly, he has not yet cancelled the Dakota Access Pipeline or Line 3). And he’s making it clear that the oil, gas and coal industries will have to be wound down in the coming years. In short, Biden is putting the full institutional weight of the U.S. government into the climate fight.

On the urgent need for a societal climate mobilization, the Biden administration has come bursting out of the gate, leaving the Trudeau government in its dirt. Earlier this week, Environment Canada released the latest GHG data. In 2019, the last year for which we have statistics, Canada’s GHG emissions went up yet again — they have risen each year since the Pan-Canadian Framework climate plan was released in 2016.

* The precise amount of federal climate spending plans is hard to determine, given various announcements that spread spending for different programs over a varying number of years (ranging from three to 10). In October 2020, the government announced new climate-infrastructure spending amounting to a meagre $2 billion per year to be cumbersomely administered through the Canada Infrastructure Bank, rather than nimbly financed through the Bank of Canada. Then, in December 2020, the federal government released its updated climate plan, which included $15 billion in additional spending, but spread over three to 10 years. So I’m generously estimating this combined total to be approximately $5 billion a year.

On Jun. 17, 2019, the Liberal Govt that declared a climate emergency.
On Jun. 18, 2019 — the next day — the same Liberal Govt approved the TMX pipeline expansion project.
What else do you need to know?

Trudeau: "No country would find 173 billion barrels of oil in the ground and just leave them there."
Under climate leader Trudeau, Canada's GHG emissions in 2018 hit levels not seen in a decade.
Oilsands emissions do nothing but climb year after year.
Oilsands expansion enabled by new export pipelines and new LNG projects will prevent Canada from meeting its inadequate targets for decades.
That's Trudeau's climate plan.

We could use some articles

We could use some articles that did not take the perspective that this is entirely a government problem, and only government programs are responsible for changing the economy.

The pipelines are about the least-interesting and relevant fossil fuel infrastructure. Did Biden shut down a single fracking operation? (Remember, Trump said he was going to do that? So Biden basically can't.) Fracking is putting out a hell of a lot more methane than the frackers claim it is, and to say that Canada is the worse GHG polluter right now may be simply untrue, after the methane is factored in...just for instance.

For me, the fight is all about R&D: who is inventing the better alternatives? All the forbidding and taxing of fossil won't do a damn thing except raise prices, unless green alternatives are invented. What are all countries contributing to battery, wind, solar, and nuclear R&D?

You're quite a few years out

You're quite a few years out of date. Sure, I'll be pleased to see R&D in these things continue. But if all R&D on climate-related technologies stopped today, we have the technology NOW to get the job done. Solar works NOW. Wind works NOW. Batteries work NOW, and will continue to drop in price just from increases in manufacturing efficiency as production continues to increase, even if the technological advances currently being researched never materialize. Nuclear . . . um . . . is ridiculously expensive and problematic in other ways NOW, and R&D seems just to be delivering more of the same, so more R&D on it is largely irrelevant.

It would be nice for there to be more research into solar, wind, batteries, and for that matter geothermal and wave power. But we have the technologies; the main fight is not currently about R&D, it's about implementation. Building the solar and wind farms with the battery backup, building the transit systems, retrofitting homes and industry to use electrical heating and manufacturing techniques, mandating the electric vehicles, all that stuff . . . right now we need to be DOING things much more than researching them. And much of that doing, or at a minimum the regulating, subsidizing and so forth that push them into being done, must come from government.

There are relative edge cases where existing technology doesn't get the job done--air travel, for example. But for the most part, that's not the case--even steel, for instance, can be made without burning coal (although you still need to get a bit of carbon into the iron, you don't have to burn that carbon to heat the metal), it's just not a mature, cheap technology yet. If we had to make expensive steel to get it to zero emissions, we could.

So at this point talking as if the main event is R&D amounts to obstructionism. It's saying we should kick the can down the road, do some more studies, pretend we have no usable technologies yet to have an excuse to do little until some day in the future when the R&D has been sufficient.